(Minghui.org) Today's news from China includes incidents of persecution that took place in 26 cities or counties in 9 provinces, where at least 71 practitioners were recently persecuted for their belief. 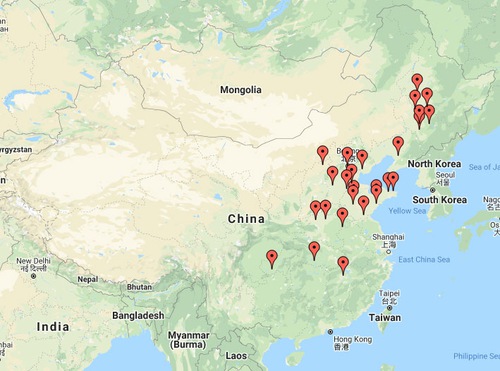 Ms. Wan Lihua, in her 50s, was arrested by Domestic Security officers in Nanchang University on the morning of September 24, 2019. Her home was ransacked. She has been held in the Nanchang City No. 1 Detention Center. She was given a three-and-a-half-year prison term in mid-August 2020. She has appealed the sentence.

Ms. Huang Runxiang, in her 70s, from Pingle Town, Mengjin County, was monitored and followed when she talked to people about Falun Gong at a farmers market on September 6, 2020. She was arrested at home. Her home was ransacked.

Ms. Lu Guizhi was arrested at work by four or five officers led by Wei Hongbo, head of the Zhangqiu District Domestic Security Division on September 16, 2020. She was taken to the Shuangshan No. 2 Police Station for interrogation. She was not released until 10 p.m. Wei took her keys and ransacked her home. They confiscated a printer, a computer, and Falun Dafa books.

Wen Yuguang, an officer from the Bishan District Domestic Security Division, and more than twelve officers from the Daxing Town Police Station went to Mr. Cao Xianlu’s home, harassed him, and photographed his home on September 15, 2020.

When Mr. Cao asked what their names were, the police station director threatened his family that his son Mr. Cao Dengli would be dismissed from work.

Ms. Zhao Shuqin, in her 60s and disabled, from Laofangzi Village, Xinxing Township, was arrested and taken to Siping City for insisting on practicing Falun Gong and not giving up her faith.

Ms. Liang Chunxia’s sister and husband received phone calls from Li Ying, who is from the Tianchang town government, and the village head of Chenjia Village on August 17 and 18, 2020 respectively. He told them to persuade Ms. Liang to sign the three statements at the town government office, otherwise she would be taken to the Shijiazhuang Brainwashing Center.

Five people from the Town Government and the police station went to Huang Guozhen, the village head, and told her to take them to Ms. Chen Fengrong’s home for harassment.

Li Ying, from the Tianchang Town Government, and police officers went to Ms. Feng Lin’s home and harassed her on August 20, 2020. Ms. Feng was not home at the time. The village head Jia Aiting phoned Ms. Feng’s son and threatened him that if Ms. Feng did not sign, she would be taken to a brainwashing center. The son was frightened and immediately called his father. Both father and son were working out of town, and this was a huge mental blow to them. The village accountant went to Ms. Feng’s home and demanded that she sign. Ms. Feng instead told him the facts about Falun Gong.

Mr. Li Handong in Jiangzhuangzi Village was harassed several times by officers from the Yaoguantun Township Police Station in September 2020. Mr. Li’s family members were told to sign the guarantee statements on his behalf, saying that he would give up practicing Falun Gong. The officers then called Mr. Li and insisted that he meet with them.

Mr. Shen Zhiguang and his wife Ms. Dai Jin’e from Zhangguantun Township were harassed three times in recent days. The Village Party secretary, accountant, and two township government officials (including one whose name is Chu Guicai) went to the couple’s home on the afternoon of September 10. They attempted to videotape the place as soon as they arrived. Ms. Dai stopped them. They took out a video, in which a man talked about why he stopped practicing Falun Gong, and showed it to her.

The village director led a few people from the township government and went to the couple’s home again the following day. They showed the Ms. Dai the video again and insisted she give up practicing Falun Gong. She refused.

Ms. Yang and Ms. Zhang’s home was ransacked, and photos of the founder of Falun Gong, Falun Dafa books, a computer, a printer, and a phone were confiscated.

Jia Pengde, head of the Fushan Town 610 Office, and other people broke into elderly Ms. Wang Guoju’s home in Liujia Village and took over 300 yuan in cash at noon on August 27, 2020. Ms. Li Cuiyu was there. Both practitioners were arrested and released that day.

The officers broke into Mr. Liu Mingzhong’s home in the village on August 29, 2020. They attempted to confiscate a copy of Zhuan Falun and an audio player. Mr. Liu was able to take back both the book and the audio player. Jia Pengde became furious, and ordered two people he brought to tear down all the Falun Gong informational couplets posted by practitioners in the village.

Three people from the Pingdu City Political and Legal Affairs Committee’s 610 Office and Jiudian Town Government officials, led by the village Party Secretary, went to Mr. Wei Jianmin’s home and harassed him on September 16, 2020. They confiscated two copies of Zhuan Falun and Master’s lectures given in various places.

They went to the homes of Ms. Zhang Zengxue, Ms. Zhang Peiying, Ms. Zhang Shufang, and Ms. Zhang Jinmin in Dongliangezhuang Village at around 2 p.m. on September 16. When they saw the calligraphy writing of “Truthfulness-Compassion-Forbearance” on the door, they tore it off and took photos with their cell phones.

They took The Ultimate Goal of Communism, two audio players, and a few Fa-teaching lectures from Ms. Zhang Jinmin’s home. They threatened her that she would not be allowed to live in her home. They also told her that she had to avoid meeting other Falun Gong practitioners.

Ms. Wang Shufan, 51, was arrested in September 2018. It is not clear whether she is being held in prison or in a detention center.

Mr. Wang Dayong from Wangshi Town was reported to the police when he talked to people about Falun Gong on September 19, 2019. He was arrested and his home was ransacked by officers from the Haicheng City Police Department and the Wangshi Town Police Station. He was held in the Erdaohe Detention Center. His case was brought to the Lishan Court in Anshan City.

Ms. Duan Xiuyun from Pingyuanpu Village, Xinping Town, Tianzhen County, was arrested and taken to the Hunyuan County Brainwashing Center by village officials on September 10, 2020. All of the Falun Dafa books in her home were confiscated.

Mr. Song Wentao was arrested by officers from the Caomiaozi Town Police Station when he talked to people about Falun Gong, handed out 2021 New Years desktop calendars, and distributed Falun Gong materials at the Caomiaozi farmers market on September 15, 2020. He was released eight hours later.

Ms. He Shuqin was arrested at the Jiaozhou North Railway Station when she was heading out to Shanghai to visit her son on the morning of August 5, 2020. At the station, her bag was searched and keepsakes were found. Officers from the Fuan Police Station arrested her. Her home was ransacked that afternoon. She was released on bail.

Ms. Shang Yuzhen, 61, was arrested at home by Xu Chongjun from the Daiyue District Domestic Security Division and two other officers from the Zhoudian Police Station at around 7 a.m. on September 15, 2020.

She was taken to the police station, where she was interrogated for a day. The police forced her to sign the interrogation transcript before releasing her.

Ms. Jin Min, 53, was arrested when passing out 2021 New Years desktop calendars in Shuanghe Town, Yongji County, on September 11, 2020. She was taken to the Jilin City Detention Center.

Officers from the Handian Town Police Station went to Ms. Fu Lihua’s home and harassed her on September 16, 2020. They demanded to know if she still practiced Falun Gong.

Ms. Liu Junying, 68, in Xingyang City, was arrested on July 17, 2020. Her home was ransacked and her Falun Dafa books, five or six weekly publications, two audio players, and over 200 yuan in paper bills with Falun Gong information printed on them were confiscated. The police photographed her. She was detained for 10 days.

The police ransacked Ms. Wang Jinfeng’s home, and confiscated Falun Dafa books and audio players on July 17, 2020. Shi Guobin from the 610 Office threatened Ms. Wang’s son, who forced his mother to go to a police station. In the end, Ms. Wang, in her 60s, was arrested and detained for five days.

At the same time, Ms. Zhang Lianxiang, 70, was also arrested. Her home was ransacked, and her Falun Dafa books and weekly publications were confiscated. She was detained for six days.

Ms. Hao Chunmei, about 60, was harassed. The police confiscated weekly publications and a large bag of personal belongings.

Mr. Li Dayong from Heping Residential Community, Ningjiang District, was arrested on August 17, 2020. The facility where he is being held is not known.

Ms. Zhou Shuru from Hongmiao Village, Duqiao Town, was arrested by the Jing County Domestic Security Division around 9 p.m. on September 16, 2020. She was held in the Hengshui Detention Center.

Mr. Zhang Shulin, Ms. Xu Qiaolian, and Ms. Wu Xiuzhi from Lixin County were arrested and taken to the Bozhou City Brainwashing Center by the Lixin County police on September 15, 2020.

Sun Baoan, Party secretary of the Jiuqudian Village Committee, Jiuqu Town, Hedong District, actively participated in the persecution of Falun Gong practitioners, and forced them to give up their belief. He deducted Ms. Song Fangxia’s pension and benefits for seniors during her four years in prison.

On September 7, 2020, Sun forced Ms. Song and her daughter to go to a brainwashing center, threatening to deduct all the benefits her son’s family received.

Sun also took Ms. Zhu Qingying to the village committee, and forced her to write the guarantee statements, using her grandson’s Party membership as leverage.

“Don’t Delay Until It's Too Late”

“Lawyer Tried, Wife and Daughter Arrested, All for Their Shared Faith”