(Minghui.org) Today's news from China includes incidents of persecution
that took place in 18 cities or counties in 10 provinces, where at least 37
practitioners were recently persecuted for their belief. 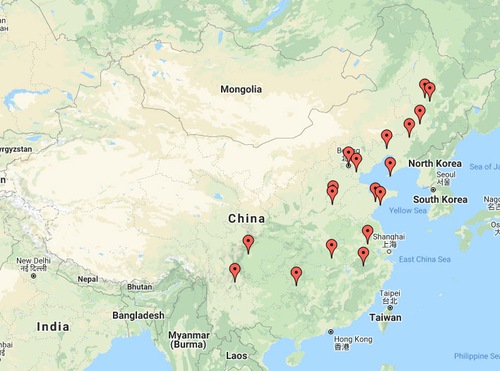 Six policemen took Ms. He Xiuyun with them and ransacked her home. They confiscated all her Dafa books, two sets of lecture CDs of Master teaching in Guangzhou and Dalian respectively, several CDs of Master teaching the exercises, five music players bought for fellow practitioners, four music players of her own, two MP3 players, and multiple truth-clarifying materials. People from the Xinjie Community also searched her home and took dozens of copies of the booklet “The Ultimate Goal of Communism.”

Ms. Zhou Mangao developed sickness symptoms after midnight and was sent back home.

Ms. Wang Lingjuan was arrested after she distributed truth-clarifying materials on a bus on the afternoon of May 28, 2020. She was interrogated in the local police station and in the police department. Later, after being diagnosed with a lung problem at the hospital, she was allowed to go home the next day. The reason was “suspected to have the coronavirus.” Her phone was tapped. The police also came to search her home twice.

Mr. Yang Xuewen was secretly sentenced to two and a half years in prison. He was sent to Hulan Prison on September 10, 2020. His family was not notified.

Ms. Shen Chuanfang from Jiangbei New District was arrested by officers from the Xiejiadian Police Station on September 13, 2020. Her home was ransacked. She was sent to the Nanjing Detention Center on September 14.

Elderly Ms. Ma was harassed at home by police from the Yizhou Town Police Station. She also refused to sign the statement not to practice Falun Gong.

Mr. Pei Tingjiu from Rongsheng Village, Handian Town in the Shuangcheng District, returned home from Hulan Prison on September 13, 2020. The next day his wife was phoned by officers from the local police station who requested that Mr. Pei come there. When he and his wife went to the station, the police demanded that he sign the so-called “guarantee statement.”

Mr. Pei Tingjiu was arrested by officers from the Daoli District Police Department on September 13, 2017. He was detained in the No. 2 Detention Center of Harbin for more than a year. He was later sentenced to two years in prison by the Daoli District Court and was sent to Hulan Prison.

Ms. Yang Shuzhi and Ms. Lan Changhua were arrested on September 14, 2020, when they distributed truth-clarifying materials. Their homes were ransacked. They are currently detained in the Diaobingshan Isolation Area in Tieling City.

On the morning of August 11, 2020 a hearing was held in the 9th Court of the Huili County Court by the Intermediate Court of Liangshan Prefecture on the appeals of four practitioners, Ms. Ma Lingxian, Ms. Luo Jiping, Ms. Zheng Qiong, and Ms. Dong Xiuqiong. The case has gone on for nearly five years. The Liangshan Intermediate Court finally concluded the case by upholding the original judgment.

Ms. Yan Ling from Fengtai District was arrested on October 6, 2019 when she talked to people about Falun Dafa and the persecution. She was first detained in the No. 1 Detention Center and was later transferred to the Fengtai Detention Center. She will be tried in October 2020.

Ms. Zhang Wenci (73 years old) was arrested at home on the evening of September 10, 2019. Her home was ransacked. She was officially arrested on October 14, 2019. She has now been detained in the Hongqiao Detention House for more than a year.

She was originally scheduled to be tried on September 4, 2020 in the Hongqiao Court. Because the related witnesses were unwilling to testify in court, her case was returned to the Hongqiao Procuratorate to be resubmitted.

The police ransacked Ms. Zhang Junfang’s home and took away her personal belongings including Master’s portrait, more than 40 Dafa books, a computer, a printer, two cell phones, an iPad, ID cards, bank cards, and other items.

Officers from the Longwangdang Police Station went to Ms. Zhang Cui’s home to look for her. When her daughter, a non-practitioner, refused to tell her mother’s whereabouts, her daughter was arrested and taken to the police station. After she was held for one day and one night, she phoned her mother. Ms. Zhang Cui was arrested and is currently detained in the Yaojia Detention Center.

Two policemen from the Furi Police Station went to Mr. Tang Zhengmin’s home on September 18, 2020. They took his wife, Ms. Du Xiaoyan to the police station. They demanded she sign a form and threatened to put her in detention.

Mr. Xue Jianxin was also arrested and was threatened with detention. The police tried to pressure a family member to sign a form on his behalf. He refused.

In August 2020, staff from the Xiangfang District Welfare Community demanded a copy of Ms. Chi Guixia's ID Card. They also told her not to participate in any Falun Gong activities. She refused. They also went Ms. Chi’s mother's home to harass her. Her mother is not a practitioner.

Mr. Bao Shouzhi, from Beijing, was arrested by officers from the Donghua City Police Station on July 16, 2019. He was officially arrested on August 21, 2019. He was tried online by the Dongcheng District Court on September 8, 2020.

Ms. Li Changhua and another practitioner from Lujiadazhuang Village, Liuwang Town of Huangdao District, were phoned and told to go to the town office on August 10, 2020. The village director Liu Zuchang wrote the so-called “guarantee statement” for them. They were forced to sign it.

Ms. Zhang (about 40 years old), was arrested near the Erlang Temple Bus Station in Xudong, Wuchang District on September 16, 2020. Her current whereabouts are unknown.

Staff from the Luowan Community of Mengyang Town including Zhuang Jingzhuao, came to Ms. Wu Qingxiu’s home to harass her. Because Ms. Wu Qingxiu was not at home, they threatened and tricked her husband to sign the form. Her husband later regretted doing this and wept.

Ms. Liu Fenglan (over 70) and her daughter Ms. Zhang Haiyan (around 50) were arrested by police from the Wenfeng District Domestic Security Division on September 3, 2020. Their home was ransacked. The case is being investigated for further details.