Koreans Find a Way to Stay Youthful and Healthy

(Minghui.org) Many people in South Korea have been searching for a way to stay illness-free and become youthful and healthy. In June and September of this year, several Koreans found a way during a nine-day Falun Gong workshop. 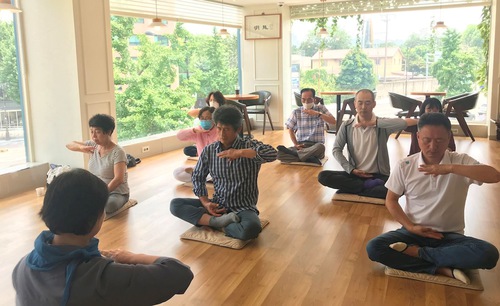 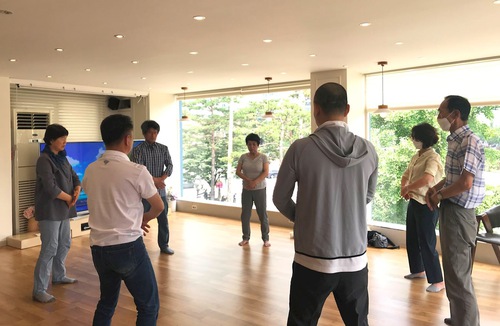 A New World of Youth and Health

Mr. Jeong Teuk-mo is from Goyang City and was introduced to Falun Gong by a friend. After reading Zhuan Falun, the main teachings of Falun Gong, many questions that Mr. Jeong had over the years were resolved.

Mr. Jeong is in his 60s. “I think Falun Gong is worth a try no matter how old you are. Master Li Hongzhi has taught something no one else ever has, and opened up a new world,” he said.

Mr. Jeong believes he is lucky to have learned from Master Li. After starting the practice, Mr. Jeong was no longer constantly thirsty. When he did the exercises, he felt uplifted, and the numb feeling in his arm disappeared.

A ligament in one of Mr. Jeong’s leg was injured and he was afraid to cross his legs in the full lotus position to do the sitting meditation. When he followed Master Li on the exercise video, he decided to give it a try and endured the pain. He successfully crossed his legs. “I’ve never believed in anything I couldn’t see. Now the miraculous power of these teachings has changed my mind.”

He said that he felt much better after doing the meditation. “It felt like when I was young. I was able to walk quickly with good balance, just like the conditions described in Zhuan Falun. Experiencing this personally has allowed me to open up and accept the teachings in the book.”

Ms. Kim Mi-hyang had been struggling with painful life experiences, and suffering sharp pains in her chest when she was stressed. Religion had not helped. She read many books and learned that meditation could help relax her mind. She started to do a meditation practice but gave up after a month because the fee was shockingly high.

One rainy day she walked around her neighborhood to get some exercise and found a Falun Gong flier on the ground. She called the number on the flier. After two days of practice, the chest pain that was caused by her mental stress disappeared.

She said, “When I did the exercises, I felt something boiling hot rushing from my lower abdomen to my aching chest. I didn’t know what it was. The next day it felt like a channel in my chest had opened up. From then on, I felt better and had more energy. It was an obvious feeling.”

Through reading Zhuan Falun, Ms. Kim discovered the cause of all the pain in her life. “I knew that the teachings in the book weren’t illusive. It teaches the most fundamental things,” she said.

Mr. Choi Soo-gil lived in China until 2007. “The Chinese Communist Party attacks Falun Gong in the news all the time and I believed that propaganda. After I came to South Korea, I learned about the persecution of Falun Gong on the Internet,” he recalled.

Mr. Choi had tears in his eyes. He said it had taken him a long time to get over his fear of Falun Gong, even after he came to Korea, which shows just how powerful the CCP propaganda is.

He said, “Although I knew that Falun Gong was being defamed and persecuted, I still had doubts.” After Mr. Choi read Zhuan Falun, his desire to learn the practice grew stronger. One day he made a call and registered for a nine-day workshop.

Two days before the workshop began, he was thrown off his scooter at a turn and couldn’t stand. At the moment he thought, “I am starting the practice soon, I will be fine.” He then stood up. “Not wanting to block traffic, I pulled my scooter to the side of the road. It really hurt, but I tried to take control. I remembered hearing somewhere in the media: ‘Falun Dafa is good, Truthfulness-Compassion-Forbearance is good’ so I recited the phrases in my mind. It took the pain away,” he said.

Eight days into the workshop, Mr. Choi had stomach cramps, which had been a chronic problem for him. He used to drink or eat something to relieve his symptoms. His mindset changed after he became a practitioner. “I knew that Master was cleansing my body, so I decided to bear it. Not long after, I burped and the pain went away,” he said.

Mr. Jeong Ki-sang, 83, decided to become a practitioner after he saw Falun Gong practitioners doing the exercises in a park. “After reading Zhuan Falun, I felt that it was what I should practice. There is deeper meaning to the practice and it could lead to longevity and health. I used to feel stiff all over but now I am becoming more flexible,” he said.

Mr. Jeong said that many times as he did the exercises he felt heat coming from one of his palms and flowing to the other.

Another new practitioner, Mr. Lee Dong-ju, said that the practice made him feel positive, and he was able to focus at work. His job is driving foreigners from the airport to health clinics and he often worried about catching COVID-19. He said that research at a university in Texas had shown that Falun Gong practitioners’ immune systems are stronger than non-practitioners’. “Luckily I practice Falun Gong now. It would be great if all taxi drivers could practice Falun Gong,” he said.