Zurich, Switzerland: Practitioners Learn from Each Other at Falun Dafa Experience-Sharing Conference

(Minghui.org) The Second German-speaking Switzerland Falun Dafa Experience-Sharing Conference was held in Zurich on October 4, 2020. Speakers at the conference included twenty practitioners from Switzerland, Germany, and Austria. The youngest was just 16, and the oldest was in their 70s. Three of them had only started to practice Falun Dafa recently, while others had practiced for more than 20 years. Every one of them spoke from the heart about the beauty of Falun Dafa.

They talked about how they have followed the principles of Truthfulness-Compassion-Forbearance in their work, study, and lives, and how they tell people about the persecution of Falun Dafa in China. They expressed gratitude for their improved health and spiritual development and the hope to do better in cultivation going forward. 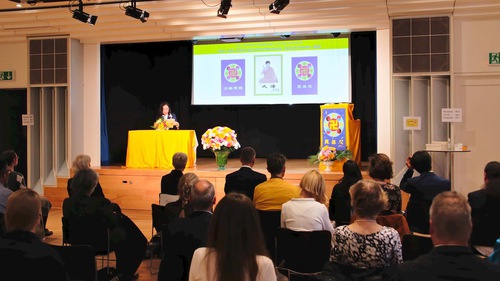 Being Considerate of Others and Looking Within

Practitioners in Ursula's city have been distributing pamphlets about Falun Dafa to local residents and tourists for years. When it was time to update the pamphlets, Ursula was glad to help, but she ran into several challenges. First, a practitioner who had been working with her was no longer available to help. Although a young practitioner agreed to step in, she did not have the images they needed and could not finish the first draft on schedule. These difficulties bothered Ursula and interfered with her ability to properly study the Fa teachings and do the exercises as usual.

Thinking about it further, Ursula realized she had been attached to her own ego and had set unrealistically high standards for other practitioners. “That is, I was inconsiderate of others all along,” she explained. “After all, that young practitioner has a regular job and her husband is not a practitioner. I should thank her for offering to help with this project and support her, instead of complaining about this or that.”

As the project continued, Ursula found more attachments. For example, she was very worried after the first draft was completed because she feared criticism from others might make her lose face. To her surprise, the feedback was very positive and many practitioners believed the quality of the pamphlet had improved.

Looking back, Ursula found notions that she needed to get rid of, such as fear of being criticized. More importantly, she was honored to work on the pamphlet and thanked Master for his help, as well as practitioners in other countries. 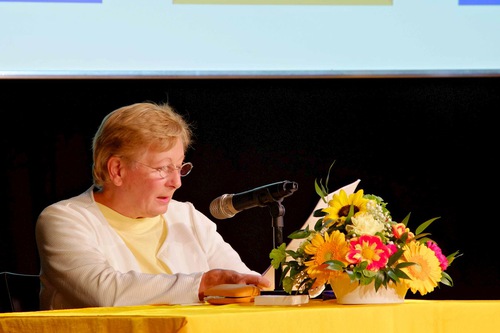 Ursula is grateful for the wisdom and abilities she has gained as a Falun Dafa practitioner.

After the coronavirus outbreak, local practitioners continued to hold their information day activities to raise awareness of the persecution in China. Due to travel restrictions, there were fewer international tourists, so Ursula decided to replace the Chinese posters with new German ones. She ran into difficulties collaborating with a practitioner on this project, and she almost wanted to give up.

At the same time, she also learned a lot. “One practitioner did not have any knowledge of typesetting, but with faith in Master and Dafa, she was able to finish designing the poster,” she said. “Through other practitioners, I saw my own problems—like in a mirror—including a lack of patience and perseverance.” In the end, they created 12 new posters to use at tourist sites.

Lin, who is responsible for Shen Yun promotion in his region, discussed something that happened last year. For about a week, ticket sales stalled. The coordinating team and local practitioners tried to figure out what was going on, but they did not see much progress.

Frustrated by this situation, Lin could not understand why other practitioners did not give him their feedback directly. That night, he could hardly sleep and kept wondering what his loopholes were that had contributed to this situation.

“I then came to understand that I was harboring a deep sense of fear inside me—fear that practitioners were not cooperative and fear that practitioners would not accept my proposals. In other words, I was afraid that, due to the slow ticket sales, others might not consider me qualified to coordinate this,” he recalled. Ashamed of his selfishness, Lin knew all of these thoughts stemmed from his desire for self-protection, which is fundamentally related to a lack of faith in Master. “Master has made all of the arrangements and I just need to let go of all of these attachments,” he said. 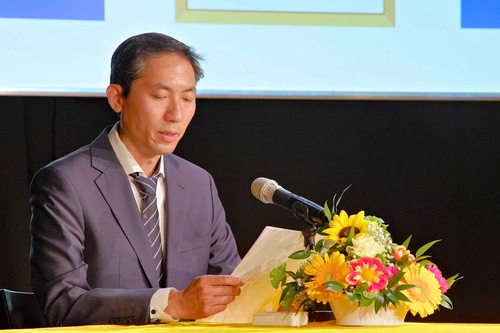 The following day, ticket sales returned to normal and continued until all eight performances were sold out. Lin was very thankful for Master’s help and for the support of his fellow practitioners.

Myriam, who is from French-speaking Switzerland, spoke of the changes she had gone through following the pandemic. “By prioritizing studying the Falun Dafa teachings and aligning with the principles of Truthfulness-Compassion-Forbearance, I have found my life easier and I am able to accomplish a lot every day,” she said. 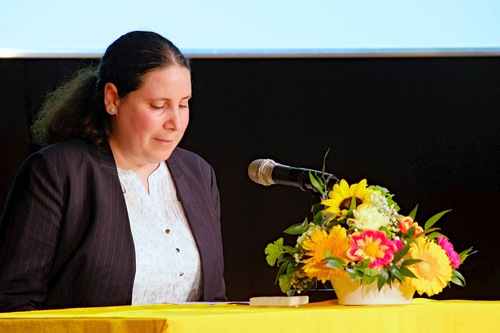 All of these changes helped her understand her responsibilities as a practitioner. As a result, she often tells others about Falun Dafa through social media. “One day, a friend from India said he has begun to do the Falun Dafa exercises every day and he sent me an article about a local practitioner's event. Another friend heard about Dafa from me and she wants to read Zhuan Falun with me every day,” she said. “I feel so fortunate to be a practitioner and, like a messenger, I am able to introduce Dafa to more people, changing their lives for the better.”

Another practitioner, Xing, also found her surroundings improved once she aligned with the Falun Dafa principles in her daily life. She lived in a rental property, and her landlord complained about all kinds of things. Xing shared with her landlord what she had learned from Falun Dafa and gave her examples of how people were blessed for helping innocent practitioners during the harsh persecution in China.

The landlord eventually accepted her advice and began to say, “Falun Dafa is good, Truthfulness-Compassion-Forbearance is good.” Surprisingly her landlord was able to quit smoking—something she had not been able to do for more than 30 years—and her temper improved significantly. She could get along with her daughter and now often recommends Falun Dafa to her friends and relatives. 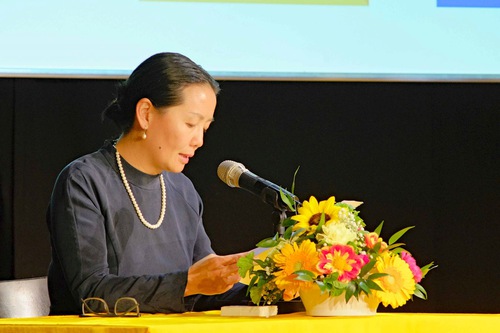 Xing talked about how she lived by Falun Dafa principles at both home and work.

Xing also talks about Falun Dafa with her coworkers and customers, focusing on the suppression in China. At first, some coworkers could not understand why she would do that. After they observed more conversations and learned that many Chinese customers had been brainwashed by the Chinese Communist Party’s (CCP’s) lies, some of her coworkers volunteered to clarify the facts to the Chinese tourists.

As time passed, her coworkers discovered that, whenever Xing was on duty, sales would increase dramatically. “I think the credit goes to Falun Dafa and Master Li,” said Xing. “When we truly want to help others, people will sense our sincerity and compassion.”

Three new practitioners spoke about their experiences. About a year ago, Diep was physically and mentally stressed. A friend recommended that she try Falun Dafa, so she started to practice. Within weeks, her health improved dramatically. 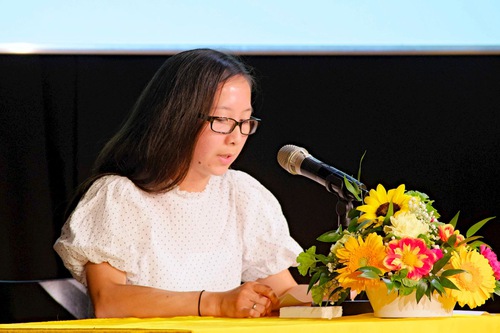 Impressed by the profound teachings of Falun Dafa, Diep was very touched by Master's compassion. “I also want to thank the practitioners who have helped me learn this and find the path of cultivation practice,” she said. While telling others about Falun Dafa, she has also found areas where she could do better. “Cultivation practice is everywhere, whether we are at home or at work. Only by following Truthfulness-Compassion-Forbearance all the time—both in mind and behavior—are we genuine practitioners,” she said.

Roberto always wondered about the purpose of life and was grateful to begin practicing Falun Dafa a year ago.

“When I opened the book Zhuan Falun, I saw Master Li’s photo and had a feeling of compassion, peace, and safety,” he recalled. “It is profound, different from any other books I’ve ever read before.” 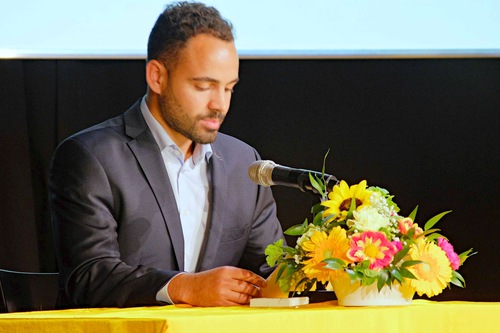 At one event, Roberto talked with a passerby about Falun Dafa and found that the person had a lot of misunderstandings. Holding himself to a practitioner’s standard, Roberto was able to remain calm as he patiently explained to the man that what the man had heard was CCP propaganda. In the end, the man changed his attitude and said he would read Zhuan Falun.

“I also learned a lot from this,” said Roberto. “Many people are waiting out there, and I need to do better to get the message across to them.”

“Appreciation of the Calligraphy by Yue Fei, a National Hero of China”