(Minghui.org) Today's news from China includes incidents of persecution that took place in 7 cities or counties in 5 provinces, where at least 16 practitioners were recently persecuted for their belief. 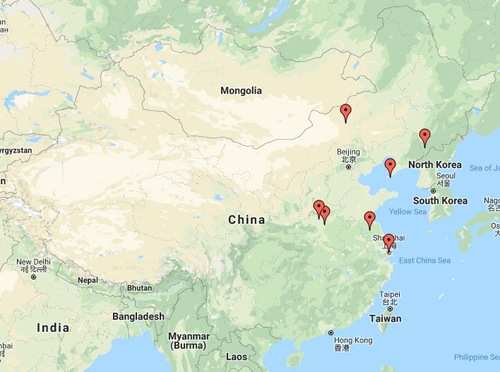 Ms. Wang Sumian, 68, from Lushun, was taken to Liaoning Women’s Prison on November 29, 2019. Ms. Wang was arrested on May 9, 2018, and her home was ransacked. Lushun Court sentenced her to three years in prison, and her appeal was denied.

Ms. Li Chunxiao phoned on the afternoon of December 20, 2019, and said she had been arrested by officers from Xinzhaizi Police Station in Ganjingzi District and was being held in a detention center.

Ms. Liu Shaoping, a Swiss citizen living in Qingpu District, was formally arrested on December 10, 2019. She is being held at Shanghai First Detention Center.

Ms. Lu Meifeng of Pudong District was arrested at home on the morning of December 19, 2019. Her home was ransacked.

Ms. Chen Hong from Huaiyin District was arrested by officers from the Wangying Police Station on December 3, 2019. The officers ransacked her home and confiscated her Falun Gong books and some other possessions. She has been held in the Huaian City Detention Center and is on a hunger strike to protest the persecution.

Ms. Chen has a five-year-old child and an eighty-year-old relative living with her who depend on her care. Her brother, Mr. Chen Guanghui, was persecuted to death in Suzhou Prison in Jiangsu Province.

Ms. Xin Shuhua of Tonghua City was arrested at her daughter’s home by officers from Antu County Police Department around September 9, 2019. She is being held in Yanji Detention Center.

Mr. Liu Heshan and his wife Ms. Li Caiqin, from Tongshuzhang Village, Gucheng Town were arrested by officers from Guodian Police Station on the morning of October 29, 2019. They were talking to people about the persecution of Falun Gong and handing out fliers in Guodian Town, Xinzheng City. Police took them to the police station, searched them, and confiscated their fliers. The police then ransacked their home and confiscated their audio players and other items.

The couple were placed on administrative detention the same day and then criminal detention on November 8, 2019. They are being held in Xinzheng City Detention Center.

Mr. Jiao Shaopeng and Mr. Liu Yingkuan were put on trial. They are being held at the Yanshi City Detention Center.

Ms. Song Xiaohua was sentenced to three years and is incarcerated in Inner Mongolia Women’s Prison. Ms. Hao Yuhua is under house arrest. Ms. Hao Guizhen and Ms. Li Xiuying are being held at Xilinhot City Detention Center. The three were tried in court.