(Minghui.org) Today's news from China includes incidents of persecution that took place in 7 cities or counties in 5 provinces, where at least 13 practitioners were recently persecuted for their belief. 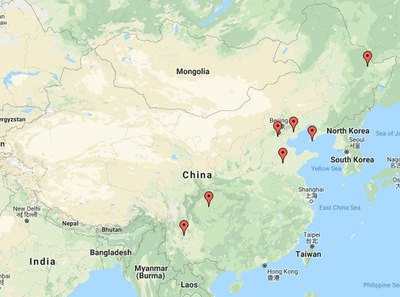 Mr. Shi Yanan, a retiree from Shandong Geological Prospecting Institute, was arrested by officers from the Daiyue District Domestic Security Division and the Zhoudian Police Station. Someone from the institute reported him when he handed out Falun Gong fliers. He has been held by police for more than a month, and his whereabouts are unknown.

Xingan District Court sentenced Mr. Ding Jiwang to a year in prison and Ms. Hao Hongyun to six months in prison on November 29, 2019. Mr. Ding is incarcerated in the Hegang City Detention Center.

Ms. Hou Suzhen, in her 60s, a resident of Yangya Village, Qianan Town, was arrested by plainclothes officers from the Zhaodianzi Town Police Station on the morning of December 11, 2019. She was talking to people about the persecution of Falun Gong in Zhaodianzi Town. She is being held at Qianan City Detention Center.

Ms. Tan Xiuqing and Ms. Xiang, 70, were arrested by officer Wang Shiping and He, head of Development District Domestic Security Division on the morning of December 11, 2019. They used paper money which had Falun Gong messages. Their homes were ransacked. Their properties, including computers and 1,500 yuan in cash were confiscated. Ms. Xiang was released. Ms. Tan is being held at Yongxing Detention Center.

Ms. Sun Qianyi was released on bail on November 15, 2019. Her husband, Mr. Yu Xiangjia is still being held at the Yaojia Detention Center.

Ms. Dong Mengjiu’s home was ransacked on the afternoon of December 12, 2019 by officers from the Linjianglu Police Station and the Guaziping Police Station. The officers confiscated her Falun Gong books, calendars with Falun Gong messages, and a cell phone.

“A Treasure: The Power of Falun Dafa's Book Zhuan Falun”