New Year Greetings from Toronto: The Power of Compassion

Having experienced many positive changes after practicing Falun Dafa, practitioners tell people about the benefits of this ancient spiritual practice, and clarify the truth about the persecution of fellow practitioners in China, and the Chinese Communist Party's (CCP's) defamatory propaganda.

Many Chinese people mentioned the kindness, patience, and compassion of practitioners. They thanked them for their courage and determination and chose to break away and quit their membership in the CCP. 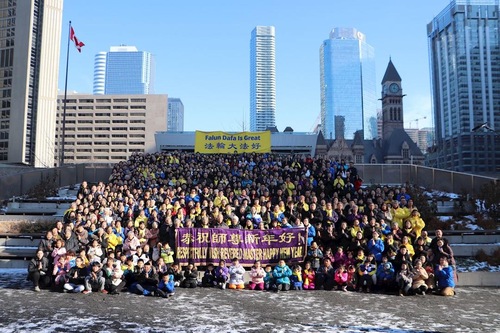 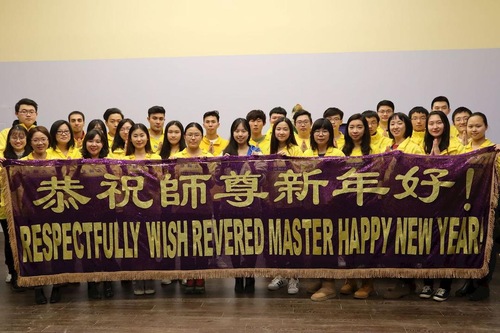 Shi is a Chinese exchange student attending the University of Toronto. Three days after arriving in Toronto, he visited the world-renowned CN Tower where he noticed the Falun Dafa information booth.

Shi proudly told a practitioner that he was a member of the CCP. Ms. Sun, a practitioner volunteer at the booth, said, “Many people are trying to stay away from the Party now.”

“Why?” Shi asked. Ms. Sun explained how the CCP harmed citizens during its numerous political campaigns, in which tens of millions of people lost their lives. “Not only that, the CCP has been persecuting innocent Falun Gong practitioners these past 20 years just because of their belief in Truthfulness-Compassion-Forbearance,” she added.

“Really? This is different from what I heard in China,” Shi said. He took out a notebook and began writing down the key points while Ms. Sun explained. She told him that most information is blocked in China due to censorship. If he really wanted to learn the facts she recommended he read independent reports from news media like the Epoch Times or NTD Television. They continued talking for over an hour and when he heard that nearly 350 million Chinese have quit the CCP organizations, Shi agreed to renounce his membership in the Party.

Ms. Sun also reminded him to tell his family this important information. “You know, when we joined the CCP organizations, we had to vow that we would give our lives to the regime. This is not trivial and we have to take it seriously,” she said.

Shi nodded in agreement. Taking out his phone, he started video chatting with his mother, saying he'd met a nice lady in Toronto who was like his aunt and she told him lots of valuable information. “After I go back, I will tell you everything I've learned,” he told his mother.

Student: I Will Tell My Father and Grandfather to Stop Persecuting Practitioners

Ms. Pan has been coming to the Chinese Consulate in Toronto for eight years to tell people about the persecution of Falun Dafa in China. She met a student from Xinjiang who was very hostile. The student said all his family members worked in the government. Both his father and grandfather were in charge of arresting practitioners.

Ms. Pan explained that practitioners follow the principles of Truthfulness-Compassion-Forbearance. She pointed out that Falun Dafa is practiced by over 100 million people in over 100 countries. The student listened attentively and asked about the self-immolation incident at Tiananmen Square. Ms. Pan said it was staged by the CCP to defame Falun Dafa. He looked at the photographs of tortured practitioners and read the information. Ms. Pan also told him how the entire world knows about forced organ harvesting.

Touched by Ms. Pan's kindness, the student apologized for his hostile attitude and said he wished to withdraw from the CCP's organizations. He said, “I'll tell my father and grandfather to stop doing bad things against Falun Dafa. I'll also tell my friends to come here [to the Chinese Consulate] so that they can quit the CCP.”

Ms. Zhang has her own way of telling Chinese people the facts about Falun Dafa, by making phone calls to China. One day she dialed the phone number to a police department in Changsha City, Hunan Province. She said, “Someone picked up the receiver. There was no sound on the other side, but the phone was not hung up. So I just kept talking. I explained what Falun Dafa is, the physical and spiritual benefits, to its wide acceptance around the world,” she said. She called the number again the following day. Nobody said anything, but Ms. Zhang continued clarifying the facts about Falun Dafa.

On the third day, she called the number again. The officer on duty replied, “Ma'am, we can tell it's you again. Glad your voice is better now—it was a little hoarse yesterday.” Ms. Zhang chuckled and said, “Thank you. I know you are young and smart. I'm so glad that you're willing to know more.”

The officer said some practitioners had talked with them before. “We know how vicious the CCP is,” he said. The officer then put the phone on speakerphone and asked the other officers to come and listen.

Ms. Zhang continued talking for about an hour. All five police officers agreed to withdraw from the CCP organizations. Since these officers also wanted to learn the Falun Dafa exercises, Ms. Zhang told them how to circumvent the CCP's Internet blockade so that they could access uncensored information.