(Minghui.org) Today's news from China includes incidents of persecution that took place in 11 cities or counties in 6 provinces, where at least 18 practitioners were recently persecuted for their belief. 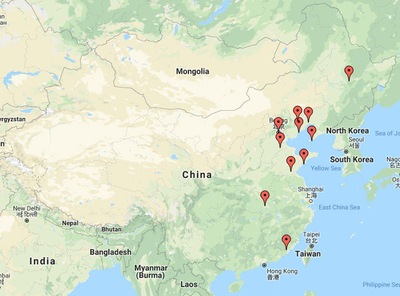 Ms. Zhang Xuemei was tried by the Yunhe District Court on December 24, 2019. She was given a three-and-a-half-year prison term in early 2020.

Mr. Liu Fu, in his 50s, from Fangguang Village, Wangxinzhuang Town, Pinggu District, was arrested by officers from the Daxingzhuang Police Station when he distributed information about Falun Gong on September 26, 2019. The officers took his keys, went to his home, and confiscated some Falun Gong booklets among other items.

Ms. Huang Meiling was reported to the authorities by village committee personnel, and arrested by officers from the 610 Office, the police department, and the local police station on December 12, 2019. She was officially placed under arrest on January 3, 2020, and faces prosecution.

The four practitioners appealed to the Wuhan City Intermediate Court, which upheld the original verdicts. Mr. Hong was taken to Fanjiatai Prison, Shayang County. Ms. Hou Mila was transferred from the detention center to a prison.

Mr. Xing Zigang, about 50, and his wife Ms. Zhao Renxia, 50, were arrested at their home in Duduozi Village by officers from the Lingzhushan Police Station, Development Zone, on the morning of January 6, 2020.

Ms. Wang Yaqin, in her 70s, was held in Yaziquan Detention Center where she was mistreated. She is now emaciated.

Ms. Shi Xiuqin was arrested at her daughter’s home by officers from Lingyuan City Domestic Security Division and Jianchang Police Department on December 5, 2019. She was officially placed under arrest and held in Ningcheng Detention Center.

Ms. Wang Shubin and Ms. Li Furong from Xingshu Town, Jinzhou District, were arrested by officers from Daliujia Police Station when talking to people about Falun Gong on the afternoon of December 27, 2019. The officers confiscated their sound players and printed materials. After the officers reported them to the Pulandian City Domestic Security Division, their homes were ransacked that evening.

Ms. Li was released due to high blood pressure, and fined 5,000 yuan. Ms. Wang was taken to the Yaojia Detention Center.

Two Jilin Woman Imprisoned for Their Faith Is In Declining Health

By a Minghui correspondent in Jilin Province, China

(Minghui.org) Ms. Dang Yanhua and Ms. Sun Yingjun both needed two inmates' assistance to walk to the visitation room to meet their respective families who recently visited them at Jilin Women’s Prison.

It was only a few weeks into their imprisonment for practicing Falun Gong, but the two women’s health and state of mind have become very concerning and worrisome.

Ms. Dang, 66, and Ms. Sun, both residents of Jilin City, Jilin Province, went missing on May 21, 2018. After asking around, their families confirmed that they were arrested after being reported for passing out information about Falun Gong. Both women refused to reveal their names or addresses to the police, who managed to find out their identifies later on.

Ms. Dang was transferred to Jilin City Detention Center on May 31, 2018.

Although the police released Ms. Sun on May 31, they followed her home, ransacked her place and took her back into custody at Jilin City Detention Center on the same day.

After one and half years of detention, Ms. Dang and Ms. Sun were each sentenced to three years and two months and sent to Jilin Women’s Prison in late 2019.

Because of not renouncing their faith, both women have been repeatedly arrested and detained in the past 20 years.

“Two Jilin Woman Imprisoned for Their Faith Are In Declining Health”