(Minghui.org) Australian Senator and Chair of the Foreign Affairs, Defence and Trade Legislation Committee, the Hon Eric Abetz spoke in support of Falun Gong practitioners' efforts to end the persecution in China during an interview in his office in Hobart, Tasmania.

Senator Abetz was elected chair of the senate's foreign affairs committee in November 2018 and has spoken with Falun Gong practitioners in Australia many times about human rights abuses in China. In his most recent interview, he said that practitioners’ efforts will help restore the basic human rights of all prisoners of conscience in China. 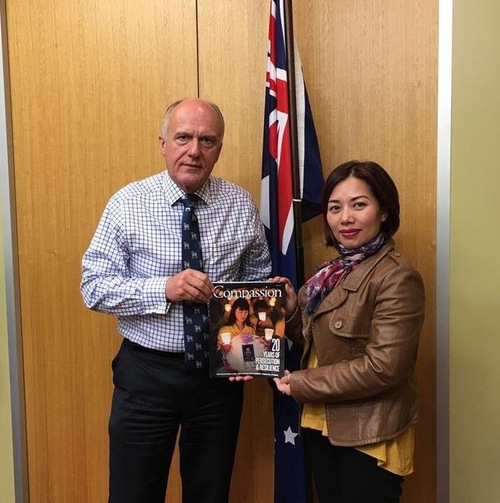 Australian Senator the Hon Eric Abetz with a Falun Gong practitioner in his office in downtown Hobart.

Falun Gong practitioners have raised awareness of the Chinese Communist Party's (CCP) forced organ harvesting from living Falun Gong practitioners since 2006, when the first witnesses started to come forward. Many Australians were shocked to learn of these killings of prisoners of conscience and signed the petition calling for an end to the persecution.

“A Lot of Hard Work by Those Collecting the Signatures”

Speaking with practitioners in his office in Hobart, Tasmania, Senator Abetz said that 250,000 signatures was a loud voice from Australian’s population of roughly 25 million.

“What it helps to do is to promote the cause of ensuring basic fundamental human rights, not only to Falun Gong practitioners but also others who have been suffering the same fate in communist China.

“Under the dictatorship, prisoners of conscience are used for the purpose of organ harvesting. This violates every single fundamental human right. I think that’s why the practitioners are so highly motivated to collect signatures and why people are so willing to provide these signatures.”

Senator Abetz said the act of collecting signatures has allowed people to learn more about the CCP’s atrocities. “People, who either respected your views or not, understand that somebody with a particularly conscientious view should not be imprisoned.

“Secondly, they should not be subjected to organ harvesting, which is a barbaric death sentence. It is just barbaric, in every sense of the word, against every single human right.

“Universal human rights include the right of life, the right of conscientious belief, the right of not having your body used in the manner that is being used in organ harvesting. So it is barbaric on every level,” he said.

Senator Abetz has requested that the Australian Department of Foreign Affairs evaluate and respond to the final report produced by the China Tribunal in London last year.

Presided over by renowned British lawyer Sir Geoffrey Nice QC, the tribunal issued a final judgement in June 2019 after listening to days of witness testimony and examining an extensive body of evidence. The panel concluded that live organ harvesting from prisoners of conscience in China continues on a large scale.

Senator Abetz said that as soon as the Department of Foreign Affairs responds to his inquiry, the response would be made public, and it would raise public awareness of what is happening in communist China.

Senator Abetz told Australian media last November that he had inquired into the Australian Government's stance on the China Tribunal’s verdict. He said he personally believed the verdict was true and accurate. He said the atrocities must end and be condemned and that the perpetrators must be brought to justice.

Australians Should Be Concerned About China’s Lack of Human Rights

Senator Abetz said China’s human rights situation should deeply concern the Australian people. Trading with China does not mean accepting the Chinese regime’s violations against democracy and freedom, he noted.

“I think freedom-loving people like Australians do need to speak out on these issues. And this petition highlights that everybody signing the petition is now aware of the issue. So that is already a quarter of a million people,” he said. “The more we are able to publicize the issue, the more Australians will get to understand the issues as well.”

Senator Abetz said he believes that Falun Gong’s principles of “Truthfulness, Compassion. Forbearance” are universal values and that the CCP’s persecution of Falun Gong, Uighurs, Buddhists, and House Christians violate these universal values.

Senator Abetz and Senator Janet Rice initiated a motion on November 24, 2016, to restrict improper organ transplants. The motion was passed by the Senate and called on the Australian Government to consider criminalizing the act of receiving involuntary organ donations overseas and to establish a registration system for patients who go abroad for organ transplants, including details of the country in which they received the transplant.

Senator Abetz said he hoped the international community would directly tell the CCP leadership that the Chinese people’s most basic human rights have been suppressed for too long. He said the Chinese people should be free from persecution and that many many have lost their lives in the past decades of communist rule.

He went on to express that when other countries have dialogues with the CCP, they have an enormous responsibility to take a stronger stance on human rights issues and to let the Chinese people know that people outside of China care about them and are sticking up for them. “I hope it will eventually bring freedom to the Chinese people,” he said.

“After Eight-Month Hunger Strike, Aircraft Engineer on the Verge of Death While Serving Time for His Faith”