Five Months in Ladakh, India (Part 2 of 3): Posters and Displays

A variety of posters have been on display in the town of Leh for several years, and many more were put up this year, mostly in the center of the town and in the area where the practitioner stayed.

For many years, a small but busy travel agency has kept a variety of posters related to Falun Dafa, and information to raise awareness of the persecution in China in both English and Hindi. The shop also displays Shen Yun posters, the painting of the baby boy meditating, and others. Many schoolchildren who go there are delighted to see these posters, as they remind them of the Falun Dafa instructional sessions in their schools.

A big Shen Yun poster from 2017, framed and put behind glass by another travel agent, is still in his office and attracts much curiosity from tourists.

Dafa-related posters cover the walls of one guesthouse and a restaurant. Tourists continue to take photos of the posters, especially of Shen Yun, although the most popular poster for many years remains “Sit by My Side” (seen below). 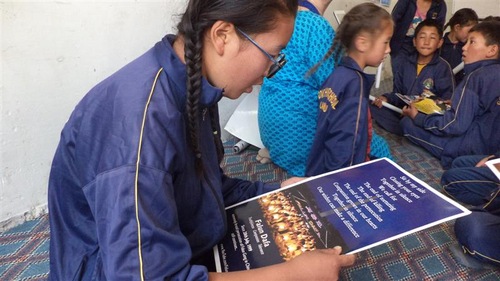 A girl holds a poster featuring a candlelight vigil by Falun Dafa practitioners in Washington, D.C. to commemorate practitioners who have lost their lives in the persecution in China.

Posters advertising group Falun Dafa exercises on Sundays (from June 15 to September 15) were put up everywhere. While few people attended, a woman from South America came once and then continued practicing Dafa at the practitioner’s place for many days. She had lived in China for several years and always wanted to do qigong exercises.

In one village, a shopkeeper with a big shop on a busy road happily selected many posters and put all of them up. He even took more posters for his shopkeeper friends to put up later.

Before traveling to Ladakh, the practitioner looked through all the Dafa-related materials she had collected over many years in her home in India, and shipped most of them by cargo to Ladakh. These materials filled seven big boxes and included books, magazines, newspaper articles, paper lotus flowers, and decorative items in a variety of languages.

A large roller suitcase, given by a visiting practitioner in 2017, has become, as some locals pointed out, a “trademark”–faithfully transporting the heavy but precious materials here and there without complaint. It has become a dear friend, a silent companion. Without it, distributing the materials would have been next to impossible, as taxis are far too expensive and it’s impossible to carry such loads on one’s back.

The practitioner took care to maintain the right state of heart and mind in order to distribute the materials to the right places and the right people. One had to be mindful not to treat it as a task to “just get rid of them.” In this respect, she saw “miracles” happen one after another.

For example, a police official who had already agreed to take many materials to distribute told the practitioner that there would be a meeting the very next day with his many subordinates from near and far. What an ideal opportunity!

Each year, all major Tibetan schools in India have a meeting of school principals, directors, and other school leaders—each time in a different part of India. This year, the practitioner hoped for them all to meet in Ladakh. She thought it was wishful thinking, as Ladakh’s remoteness makes travel expensive. But the meeting indeed took place in Ladakh for the first time, more than two decades after its inception. The practitioner was delighted to meet several principals she had met during her visits to Tibetan schools in India in 2018. The person in charge immediately agreed to distribute the materials to attendees of later meetings.

A person in charge of a medical institute called the practitioner to obtain some materials, and when she met him in his office, she found out that a local doctor was going to a nomadic area far away the next day. They both suggested sending materials to that area through him, as they felt that people in these remote areas would really treasure them and read them carefully.

The practitioner also experienced other amazing occurrences during her stay in Ladakh.

At two big schools, the libraries accepted quite a few materials, as in previous years, while smaller school libraries also took materials. She found similarly eager audiences in the courts, medical communities, and health and research centers. A few retired high-profile figures also took materials and suggested other people and places for the practitioner to visit.

A lawyer in the court asked with much concern, “You are taking care of so many people, but who takes care of you?”

Several schoolchildren, now grown up, remembered the practitioner distributing flyers years ago during displays on Main Street and other events when they were still in school.

The 2019 Minghui International magazine with the article “Tibetan Schools in India” was warmly received, by not only Tibetans but also many others. The 2019 editions of the Shen Yun desk calendar and Compassion magazine were also very well received.

Among the recipients of the book Unwavering Convictions by Chinese human rights lawyer Gao Zhisheng was an elderly gentleman who had been reading Falun Dafa materials for years, especially those about the persecution. He often invites friends and neighbors to his house to watch these DVDs while he translates them from English. He said that the contents of this book helped him to understand better the nature and workings of the Chinese Communist Party, and he again invited friends to discuss the contents of the book.

The preface and introduction to How the Specter of Communism Is Ruling Our World, a recently published series by The Epoch Times, were printed out and photocopied. Other materials included the documentary Agenda: Grinding America Down and information about the recently held China Tribunal, chaired by Sir Geoffrey Nice and held in London earlier this year. These materials give hope to all, especially those in China being persecuted, but also to those around the world who have been kept in the dark regarding the true situation, for them to wake up and take a stance.

Some locals were deeply moved by the pictures in the Shen Yun wall calendars, and wanted to frame them to keep in their homes. They find Shen Yun incredibly beautiful. As the show has not yet come to India, distributing Shen Yun-related materials is all the more important and inspiring for the people of Leh, as well as those in remote areas and tourists from all over India and the world. Hopefully this will help pave the way for Shen Yun to perform in India one day.

The owner of the guesthouse where the practitioner stayed enthusiastically put up two big Shen Yun posters for 2019 and one of a previous year—right at the entrance to his house. He also put up other posters inside the house.

Displaying Information for the Public

The practitioner held four public exhibitions of Falun Dafa information this year. She paid particular attention to giving materials to people from far-away areas so they could bring them there to share with family and friends. In this way, residents near and far could be informed of Falun Dafa and the atrocities still happening in China, as well as the beauty of Shen Yun. Oftentimes people from far away areas seemed to treasure these materials more than the people in town.

The first display was held near an annual Buddhist celebration a few kilometers outside of Leh. In previous years, several displays were held at the same place. As many people gathered very early to sell various items and occupy any available space, the display had to be set up by 6:00 a.m. As usual, a constant stream of people passed by, most of them in their best traditional dress, from babies to seniors in wheelchairs. 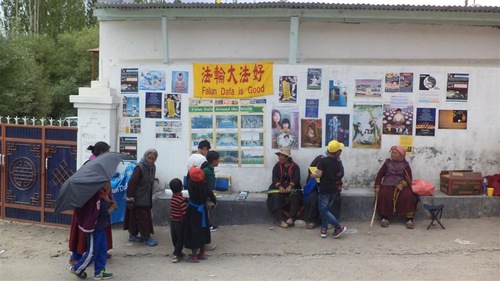 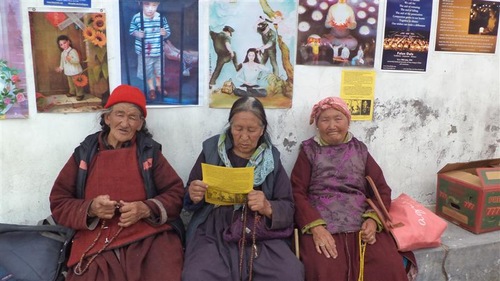 Three elderly Ladhaki women in traditional dress, with prayer beads in their hands. The one in the middle is reading about Falun Dafa in the local language. 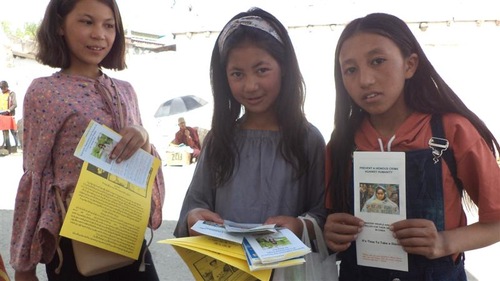 Three Ladhaki girls. The middle one asked for more flyers to give to her classmates and friends.

The usual intense heat was a little easier to endure this year, with a few occasional clouds. This was the practitioner’s longest-ever display, with only two short breaks of a few minutes. Many children started to sing “Falun Dafa Hao” as they remembered Falun Dafa from their schools.

At the end, two sisters in beautiful Tibetan dresses volunteered to take down all the posters. The gesture was especially appreciated after a long day in the heat and dust. 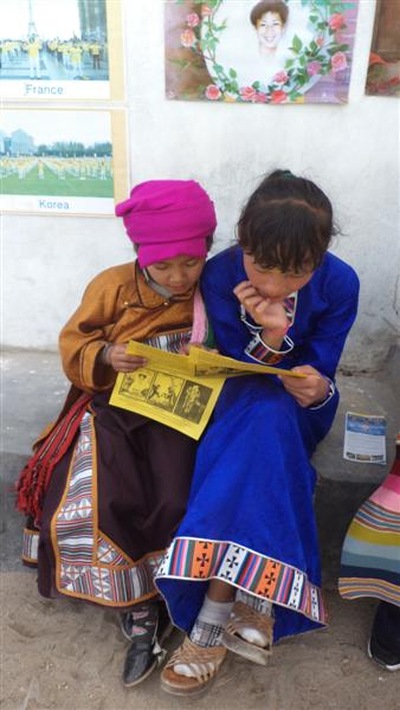 Two sisters read the materials before helping to take down all the posters.

Three displays were later held in Leh on the main street, also called Main Bazaar. This is an excellent location, where displays have been held for about ten years. Again, many schoolchildren remembered Falun Dafa from sessions at their schools, even from many years ago; quite a few sang “Falun Dafa Hao”—at least the first line. Young children seemed to be spontaneously drawn to Falun Dafa and were most eager to take flyers and look at the posters. 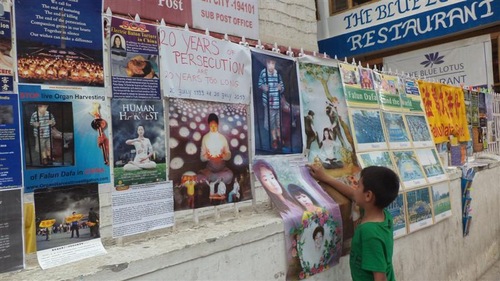 A boy reads the text to the painting “Come Back Daddy.” 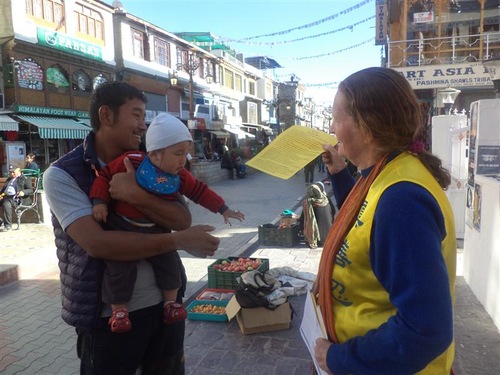 A father and his baby, eager to take a flyer in the local language

A young Chinese man showed up during one of the Sunday displays. He first took a Chinese booklet. On his second visit, he brought the practitioner chocolate and a bottle of water. On his third and last visit, he asked how the practitioner was doing in the intense heat. 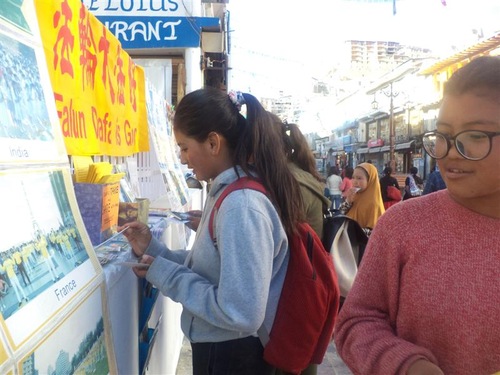 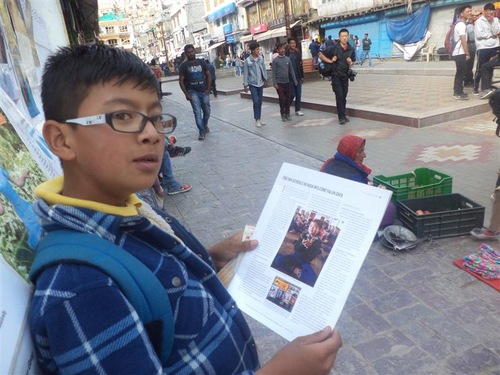 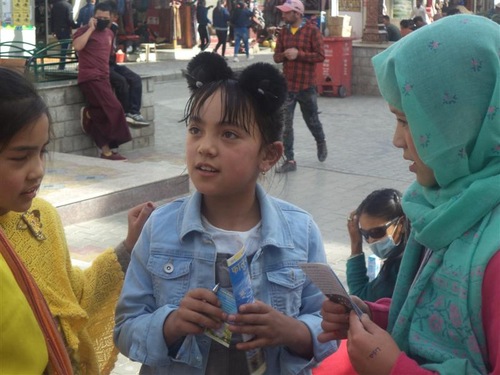 Girl with a Hindi flyer and English bookmarks 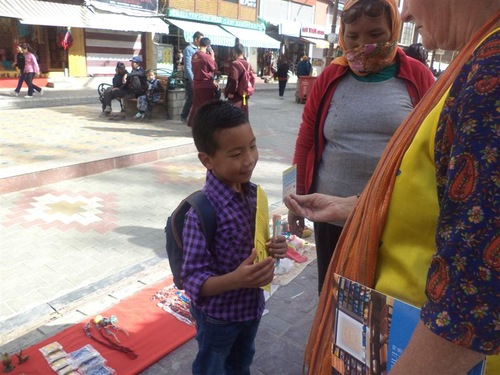 Boy looks attentively at the bookmarks 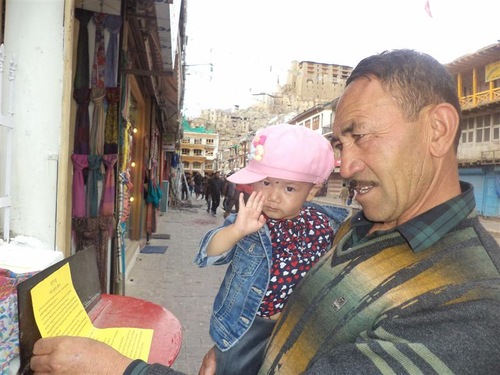 A grandfather reads text in the local language with his grandchild in his arm. The grandchild is greeting the practitioner in the traditional way of “Julley,” with the right hand before the chest. 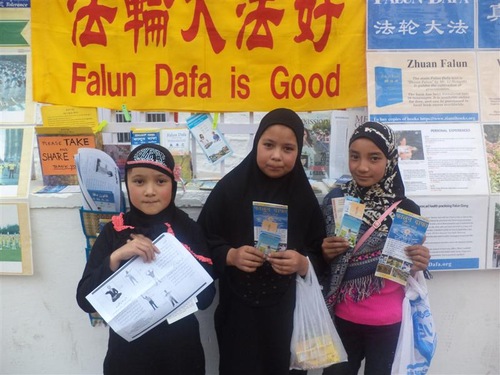 Three Muslim girls take Falun Dafa flyers in a variety of languages for their friends.