(Minghui.org) Today's news from China includes incidents of persecution that took place in 9 cities or counties in 8 provinces, where at least 21 practitioners were recently persecuted for their belief. 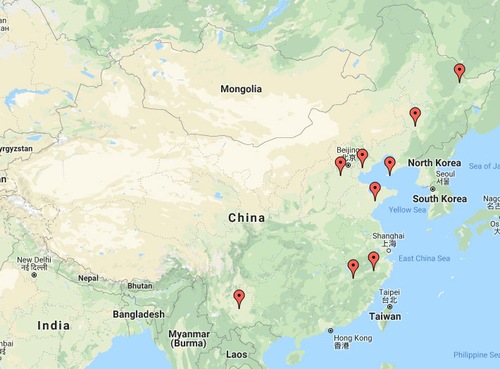 A total of 39 practitioners are being held in Gongzhuling Prison. Among them Mr. Xu Hongyu, from Baiqi Town in Shulan City, was brutally abused. In addition, Mr. Yue Naiming, from Jiangnan Township in Fengman District, Jilin City, is in critical condition.

Several officers from the Beida Wangzhuang Police Station, who were staked out near Ms. Wang Xiumin’s home, swarmed into her home and ransacked it on the morning of November 27, 2019. Her husband had opened the door to go to work. The officers confiscated her Falun Dafa books, and an MP3.

The officers dragged Ms. Wang out of bed, carried her to a police car, and took her to the police station. They tried to force her to sign paperwork promising “not to practice Falun Gong,” which she refused. In the end the police forcibly grabbed her hand to fingerprint the documents. They also drew blood samples from her. Ms. Wang was then detained in Gaomi Detention Center for 13 days. She was released after being extorted for 1,500 yuan.

Ms. Zhang Jingxin was arrested by officers from the Juhua Police Station, Guandu District, when she talked to people about Falun Gong at noon on December 28, 2019.

Ms. Xu Zhenhua, Ms. Wei Qinglan, Mr. Pan Shuicai, Mr. Xia Zhuansheng, Mr. Li Yutai and his son, from Yujiang District, were tried in the Guixi City Court on the morning of December 12, 2019. The trials lasted until after 3:00 p.m. that afternoon.

Jia Xiaohui and six other officers from the Fuping County Domestic Security Division broke into Ms. Zheng Baoying’s home on the afternoon of December 27, 2019. Ms. Zheng, who works at odd jobs in Xushui District, was handcuffed, pushed into a police car, and taken to the Fuping County Police Department, where she was shackled to an iron chair. Three officers took turns watching her and made sure she could not fall asleep. She was then taken to the Shunping County Procuratorate. She has since returned home.

Ms. Li Muzhen, Ms. Song Xiaolan, Mr. Du Yihai, and Ms. Liu Fengying were arrested by the local police when they talked to people about Falun Gong at the Bachigang Town farmers market on the morning of December 27, 2019. They were taken to Huatuo Hospital for physical exams. Ms. Liu and Ms. Song were taken to the Luannan County Detention Center at 11:00 p.m. Mr. Du was released. Ms. Li was also released before midnight for health reasons.

Participant in the persecution of these practitioners:Bachigang Police Station: +86-315-4422110

Ms. Jin Peizhen, in her 80s, received a notice from her work unit on November 28, 2019. She was told that her pension would be suspended starting in December 2019. The reason was that she had been sentenced to prison for practicing Falun Dafa. In addition, her former work unit told her that she had to return years of pension payments she had received, which amounted to 328,753 yuan. Ms. Jin retired 25 years ago.

Ms. Yang Shumei from Yudian Village, Mingyang Town, Zhuanghe City, was reported to the police and was arrested when she talked to people about Falun Gong around December 22, 2019. It was reported that her case has been turned over to the court.

Ms. Zhang Huahua from Zhaoxing Town, Luobei County, was arrested on the evening of November 29, 2019. She was taken to a detention center, which refused to admit her after a physical exam showed that she had high blood pressure. She was released that night.

Ms. Yu Xingmei and her husband are still being held in custody. It was reported that Ms. Sun Ling was also arrested. Ms. Sun Jianyan was staying away from home to avoid the persecution, and the police kept harassing her family in order to find out where she was.

“I Identified My Attachment to Showing-off”

“Turning the Court into a Place of Truth-Clarification”