Liaoning Woman Tortured to Near Death in Prison

(Minghui.org) A woman in Benxi City, Liaoning Province was twice imprisoned for a total of nine years for upholding her belief in Falun Gong. She was tortured to near death on several occasions during her imprisonment.

Ms. Zhao Huijun credits Falun Gong for curing her uterine fibroids, cholecystitis, and stomach ulcers, but her happy life was turned upside down after the Chinese Communist Party began to persecute this ancient mind-body Buddhist school practice in 1999. The following is her own account of the persecution that she and her family suffered.

Wu Yucheng, then Deputy Chief of the police station in my neighborhood, led several officers to my home at midnight on April 13, 2007. They broke the lock and arrested me. They also confiscated my Falun Gong books and over 2,000 yuan.

My daughter, who was a child then, tried to stop them. They beat her and arrested her, but she managed to escape from Benxi Police Department.

I found out the next day that the Benxi Police Department conducted this mass arrest of more than 20 Falun Gong practitioners on April 13.

I was detained at the Dabailo Detention Center in Benxi for the next six months. As I refused to wear the inmate’s uniform, I was forced to lie in a bed with my limbs tied up in a spread-eagle position for 14 days. I was fed with moldy buns and soup with worms floating on the top and dirt at the bottom.

The Xihu District Court in Benxi sentenced me to six years in prison on October 26, 2007. I appealed, but Benxi Intermediate Court upheld the sentence.

I was transferred to Liaoning Province Women’s Prison in Shenyang City on December 28, 2007. I was put in the Ninth Division, whose Deputy Manager Li Heqiao was responsible for transforming Falun Gong practitioners.

Li assigned two inmates to “transform” me. They ordered me to recite prison rules and read materials slandering Falun Gong. I refused to comply. They forced me to squat and did not allow me to sleep. They slapped me in the face so badly that I almost lost vision in my left eye. One inmate struck my head with a slipper. My head was covered with blood.

Several days of torture hurt me badly. At one point, my heart suddenly stopped beating and my blood pressure dropped to dangerously low levels. I was rushed to the hospital.

While I survived, more torture was awaiting me after I was taken back to prison. Li assigned another two inmates to torture me. They forced me to bend over with my fingertips touching my toes for two hours. They also poured cold water over me and hung my arm from a heat pipe above my head. They dragged me around by the hair. They pulled so hard that I didn’t have much hair left. They also stepped on my foot and hand, and kicked my ankle, shin, back, and head.

In the cold winter, they taped my mouth shut, tied my hands and legs in a meditation position, and threw me onto the ice outside. 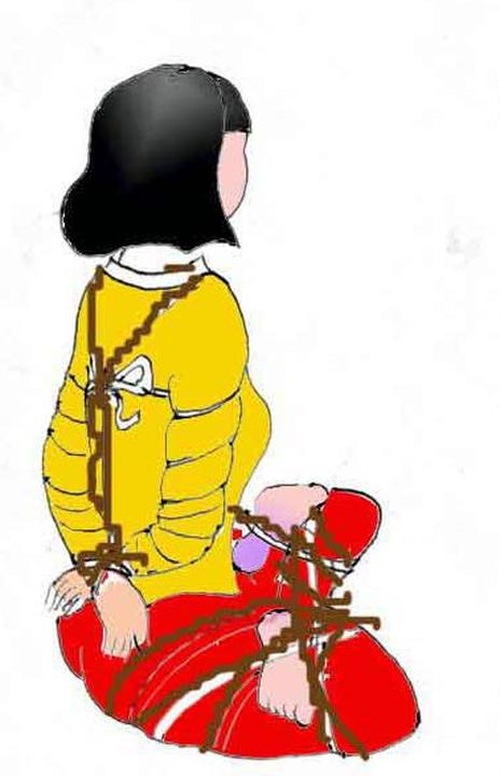 The prison guards were behind the torture. They were not present, but they provided the torture instruments to the inmates, including handcuffs, belts, tape, and rope.

My teeth were loose, left eardrum punctured, hands and feet ulcerated, left leg atrophied, and the peripheral nerves of the feet were necrotic. I suffered memory loss for nearly seven months.

I had heart failure, urinated blood, and fainted often. I was again rushed to the hospital for emergency treatment.

In 2008, the guards forced me to work at a factory from 5:40 a.m. to 9:00 p.m. each day. After I came back to my cell at night, I had to fold products such as paper bags, hamburger boxes, and medicine boxes. I sometimes made mistakes due to the torture, and the guards dumped my lunch into the trash to punish me.

I was transferred to another team in 2010. I was monitored and given very limited time to eat and go to the bathroom. I held a hunger strike for nine days to protest.

The guards took me to the hospital for force-feeding, which caused major bleeding in my stomach. The nurse in my ward, an inmate who had committed medical crimes before, gave me one or two extra bottles of 500 ml saline injections via IV every day, which caused excessive fluid buildup in my body, kidney necrosis and internal organ failure. I pulled the needle out after finding this out.

I was arrested again on July 31, 2014 while distributing materials about Falun Gong. I failed the required medical examination, but the police used their connections to force the local detention center to accept me.

The local court conducted a trial without notifying my family. I was given three years in prison, and my appeal was rejected.

I was transferred to Liaoning Province Women’s Prison on August 18, 2015 and later released on July 30, 2017. I weighed less than 70 pounds when I returned home, and my family thought that I wouldn't survive. I recovered in three months by doing the Falun Gong exercises and reading Falun Gong books.

My mother was arrested for practicing Falun Gong in June 2002. Her home was ransacked. The police handcuffed her to a heating pipe for a day before transferring her to Baishi Detention Center in Benxi. She had a heart attack and was taken to the hospital. She managed to escape and went into hiding. She was later arrested again and given two years in a forced labor camp.

My father and mother-in-law passed away while I was imprisoned for the first time. My daughter became withdrawn due to frequent police harassment.

The Benxi Social Security Bureau has been withholding my pension since I was last released. They even asked me to return the benefits that I had received during my imprisonment, but I refused.

The police frequently harasses my family and monitors me.

“Blessed Are Those Who Are Kind at Heart”