(Minghui.org) Today's news from China includes incidents of persecution that took place in 7 cities or counties in 6 provinces, where at least 42 practitioners were recently persecuted for their belief. 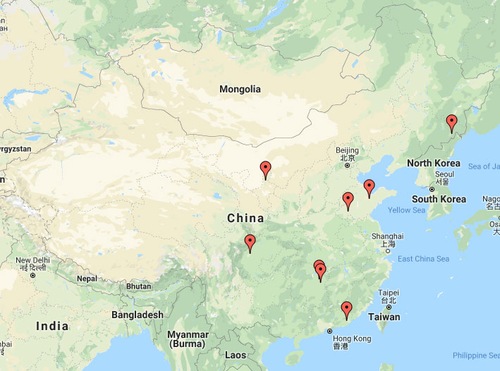 Twenty three practitioners are being detained, with eight being held in prisons, and the other 15 being held in detention or lockup centers.

Details are as follows:Menyuan Prison in Qinghai Province:Mr. Hu Jiancai, for a seven-year prison term

Not included in the count is Ms. Tan Xiuxia, who was held in Ningxia Women's Prison for three years. Her prison term should have ended at the end of November 2019, but her current whereabouts are unknown.

Zhongwei City Detention Center: Mr. Sun Jianfeng, whose case has been turned over to the court.

Mr. Han Xuezhi, from Changsha City, was sentenced to a seven-year prison term and fined 10,000 yuan by the Railway Transport Court in early July 2019. He appealed to the Intermediate Court of Guangzhou Railway Transport Section. His lawyer received the verdict from the Intermediate Court which upheld the original sentence. Mr. Han is being held in Wangling Prison, You County, Zhuzhou City.

Ms. Fu Lizhen was arrested and taken to the Xinfeng Police Station by plainclothes officers, when she was talking to people about Falun Gong on December 13, 2019. She was soon released. The police ransacked her home that morning, and confiscated photos of the founder of Falun Gong, DVDs of lectures given by the Falun Gong founder, and calligraphy of good wishes.

Ms. Wang Huixia from Fumaying Village, Meicun Town, was arrested at home by four or five officers led by the director of Meicun Town Police Station on the morning of December 18, 2019. The officers confiscated a Zhuan Falun book and printed materials. Ms. Wang was taken to the police station, but was released that afternoon.

Those being held in Wangling Prison since 2013:Mr. Tang Peilin, for a seven-and-a-half-year prison term

Ms. Xie Yuxia and Ms. Wang Xiuqin were arrested for talking to people about Falun Gong around December 13, 2019.

“Sichuan Woman Sentenced to Two Years Based on Fabricated Evidence”