(Minghui.org) Today's news from China includes incidents of persecution that took place in 8 cities or counties in 5 provinces, where at least 13 practitioners were recently persecuted for their belief. 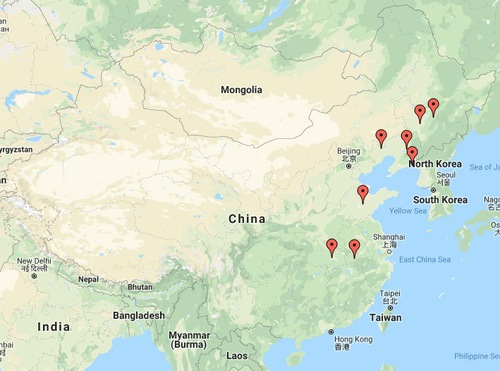 Mr. Zhu Zhaoshui, Ms. Zhu Lijie, and Ms. Sun Limei from Jishu Town were arrested and their homes were ransacked on September 10, 2019. They were interrogated and placed in custody.

It was reported that 148 practitioners are being held in Jilin Province. One hundred and thirty seven are held in No. 8 Ward, and 11 are held in No. 10 Ward. Ms. Dang Yanhua was forced to sit on a small stool. Her thighs were injured and became infected before she was allowed to stand up.

Ms. Wang Taimei was given a two-year-and-three-month prison term, and Ms. Chen Yunxia a three-and-a-half-year prison term. Both practitioners were taken to Shandong Province Women's Prison.

Ms. Yang Jingmei was arrested on the afternoon of November 8, 2019, by Liu Haitao and Zou, who work in the Zhen’an District legal system, and officers from the Taiping Police Station. She was taken to Dandong Police Hospital for a physical exam. The detention center refused to admit her after she failed the physical exam. She was released that afternoon.

Ms. Zhao Zhiying, in her 50s, was arrested in Dongxihu District on September 23, 2019. Her home was ransacked that afternoon. Ms. Zhao was officially placed under arrest. She is being held in Wuhan City No. 1 Detention Center.

Ms. Duan Yuying was arrested when she practiced the Falun Gong exercises on the Wuhan University of Technology campus during the holidays on October 1, 2019. The date marks the 70th anniversary of the Communist takeover.

Ms. Zhang Guizhi from Boluochi Town, Chaoyang County, was arrested by the railway police on July 19, 2019. She has been held in the Chaoyang City Detention Center, and was tried on November 11.

Ms. Zhang Xiuying was arrested by Wang Chenggang, an officer from Domestic Security Division, and Zhu Fuchen, who is from the court, on the morning of November 21, 2019. She was taken to Benxi City Detention Center.

Ms. Zhang’s family recently went to Shenyang Women's Prison to visit her. They learned that Ms. Zhang is being held in the Correction and Intensive Training Ward.

“Young Practitioner: Eliminating the Attachment to Pursuing Fame and Gain”