(Minghui.org) More than 1,200 Falun Dafa practitioners attended the European Falun Dafa Cultivation Experience Sharing Conference in London on August 31, 2019. Among them were many practitioners from former communist countries in Eastern Europe. 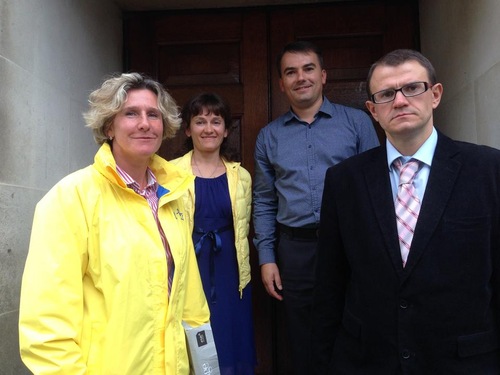 From left, Tatyana from Latvia, and Karolina, Denis, and Artem from Ukraine.

Engineer: “I came to this world for other people”

Artem, an airline mechanical engineer, a Ph.D. and former member of the Ukraine Institute of Science, has practiced Falun Dafa for 18 years. He talked about his understanding of Falun Dafa and his gratitude to Master Li, the founder of Falun Dafa, “If we study the Fa well, unite our hearts into one unit, and do whatever we are supposed to do, compassionate Master will help us to achieve it.”

From Master's “Greetings to the Dafa Disciples Attending the Fa Conference of Europe,” Artem understood that every Dafa disciple must be more considerate of others and less concerned about oneself. “I came to this world for others, not for myself,” he said.

Reflecting on how practitioners from Poland and the Czech Republic clarify the truth to government officials and mainstream society, Artem realized that Master has already paved the way and practitioners just need to carry it out. “You need to have righteous thoughts. You simply approach officials at various government levels and talk to them.”

Practicing Falun Dafa helped Artem to attain a better health and understand the meaning of life. Before he began practicing, he used to feel weak and anxious despite getting 9 to 10 hours of sleep a night. Now he only sleeps half that amount but feels energized and has a clear mind. “Reading Zhuan Falun (the main teachings of Falun Dafa) and practicing the exercises gave me energy. Now I only need half the amount of sleep I used to require and I have more time to do things,” Artem explained.

Sales Manager: “If you make a righteous decision, divine beings will help you”

Denis, a sales manager at a Ukraine company, attended the Fa conference with his wife Karolina, who is also a Falun Dafa practitioner. He started practicing Falun Dafa in 2003 after a friend recommended Zhuan Falun to him.

“I was always interested in self-cultivation and had been searching all my life. When I read Zhuan Falun for the first time all my questions were answered,” Denis said.

He said that he always tried to rationalize phenomena he encountered with science before he began practicing Falun Dafa. But science couldn't explain everything and caused conflicts in his mind. A few months after he started reading and practicing Falun Dafa he said, “The bad ideas disappeared and the conflicts in my mind were gone. It was a shocking and amazing experience.”

Denis said that he sensed the existence of divine beings and came to realize that, “If you make a righteous decision, divine beings will help you.”

After practicing Falun Dafa for years, the word “Master” became more and more sacred in his heart. “Only in an emergency would I ask Master to help me,” he said.

“I understand now that every task (in our cultivation) is part of our mission, such as passing out fliers, or clarifying the truth to someone. When you decide to do something, you do it well. It is your decision so you are responsible for it and you don't waste time on waiting for or depending on others.”

Denis was moved by the young practitioners' discussing how they gave up the pursuit of worldly fame and gain and devoted themselves to saving people. He also realized that he was still influenced by communist party culture and that he still had many attachments. “Competitiveness, jealousy, showing off, these attachments caused issues of cooperation in projects,” he explained.

Karolina added, “Whether you can cooperate with others shows how well you've cultivated. The problem is not about whose idea is better. Being able to support others and cooperate with each other is a requirement to improve your cultivation.”

Furniture Designer from Latvia: “We must clarify the truth in our daily life”

Tatyana, a furniture designer from Latvia, said that Master's greeting touched her heart. “I was moved to tears,” she said.

She started practicing Falun Dafa in 1998. However, she slackened off after a while because of pressures from work and school. A few years later, when former Chinese Communist Party leader Jiang Zemin visited Europe and publicly slammed Falun Dafa, she was shocked and re-thought what Falun Dafa was and why the communist regime launched the persecution. Since then, she became fully committed as a Dafa disciple and joined fellow practitioners in opposing the persecution and clarifying the truth.

“That awakened me. I was born in the former Soviet Union. I knew that the communist party depended on lies to maintain its control. The people that they persecuted were usually innocent,” said Tatyana.

Listening to the other practitioners' sharing gave her a better understanding of a disciple's mission. “We come from all walks of life; some are professors, school teachers, or workers. We need to clarify the truth to people in all walks of life, not being limited to truth-clarification projects, but rather to reach out to people in day to day life,” she explained.

Tatyana also wanted to help people in Eastern European countries realize how poisonous the communist teachings are and encourage them to read the Nine Commentaries on the Communist Party. Tatyana said, “The book is very helpful to me. It felt like my brain could think clearly after I read it the first time. The evil communism ideology not only affected eastern Europe but also affected the entire world through education and economy. I hope everyone can read the Nine Commentaries.”

“Hubei Man Dies One Year After Being Released from Prison”