(Minghui.org) Many family members and friends of Falun Gong practitioners in Australia have benefited from this traditional cultivation practice. The following are accounts from friends and family members who wanted to express their gratitude to Master Li Hongzhi.

'I am very grateful to Falun Dafa's Master!'

Melissa is the wife of Falun Gong practitioner Nicholas Earle. She said her husband has changed so tremendously since starting to practice Falun Gong five years ago that people close to him have taken note.

“After my husband started to practice Falun Dafa, he has tried to follow the principles of Truthfulness-Compassion-Forbearance. His mind and body have changed dramatically. He has become more rational and focused. He will think carefully before making decisions, and use his heart to achieve his goals; he has become tolerant, selfless, and more responsible. Unlike before [cultivating Dafa], he can concentrate on getting things done, and do them better.”

“My husband has become a better person. I don't have to think about the resentment in the past. I am happy to live with him now, and I believe things will only get better. I am very grateful to Falun Dafa's Master!”

Melissa said: “As a husband, Nicholas has fulfilled many promises he made to me. We already have a beautiful family. We bought a house. Following the old path he took before cultivation, all of these things would have been impossible. I am very happy now, because Nicholas is now a responsible, trustworthy, dependable husband and father. He can selflessly do things for others. When he encounters difficulties, he will not give up as he would have done before the practice. Instead, he follows the principles of Truthfulness-Compassion-Forbearance and looks for solutions.” 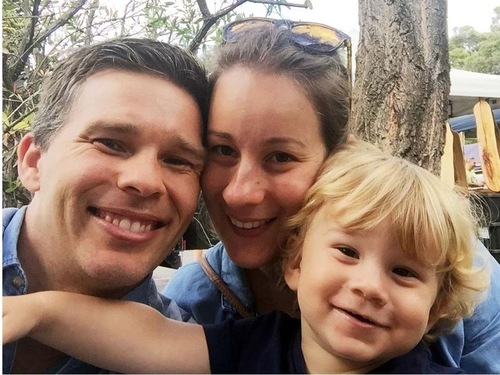 Nicholas and his family

Five years ago, Nicholas had been curious about the meaning and origin of life, so searched for the Falun Dafa website online. After reading Master Li Hongzhi's book Zhuan Falun, his life took a complete turn. From Zhuan Falun, he found new meaning in life: if people want to improve themselves, they must follow the principles of Truthfulness-Compassion-Forbearance to correct their false notions. Without these fundamental changes, any improvement would only be superficial and short-lived. When people gradually assimilate to these principles, life becomes smooth and happy.

Nicholas had suffered from severe anxiety and chronic symptoms after a car accident. He had tried many treatments, and even drinking, to relieve his symptoms, but with little success. After practicing Falun Dafa, he changed his previous negative attitude towards life, his temper became better, and all the bad symptoms quickly disappeared.

These changes caused his entire life and his work to go through a big turn around. He was hired by a big company. He made enough money and was capable of buying a house, having a wedding, and having a baby. His relationships with people around him have become good. These beautiful changes were unimaginable to him and the people around him previously. They all know that this is because Nicholas started to practice Falun Dafa.

At the age of 11, Lewis Walton was diagnosed with autism and was told that he would never receive a formal education. However, 26-year-old Lewis has completed a degree in computer programming and received an academic achievement award from the university he attended. He has now established his own business. He is a contractor for various software-related projects, and is a healthy, independent, courageous and kind young man.

How did such dramatic changes happen?

Lewis said with emotion: “This is all due to my mother, Natalie Durkovic, a Falun Dafa practitioner. So I want to say thank you to Falun Dafa and Master Li Hongzhi!”

“My mother and I have struggled through a difficult situation. Now, I can face any difficult situation, because my mother has sacrificed a lot and has done everything she can to give me a normal life and opportunities. For this, I will always be grateful. I didn't realized it until a long time later that my mother’s righteous thoughts, strong will, patience, and kindness come from her cultivation of Falun Dafa.”

“My mother is selfless and she always knows how to help others find peace. Not only did she have a huge impact on my life, but she also helped many others and made many people have an amazing transformation. I really believe that if she did not find Falun Dafa at that time, she could not have had the strength and kindness of today. So I want to say from the bottom of my heart: Thank you, Falun Dafa. Thank you, Master Li Hongzhi!” 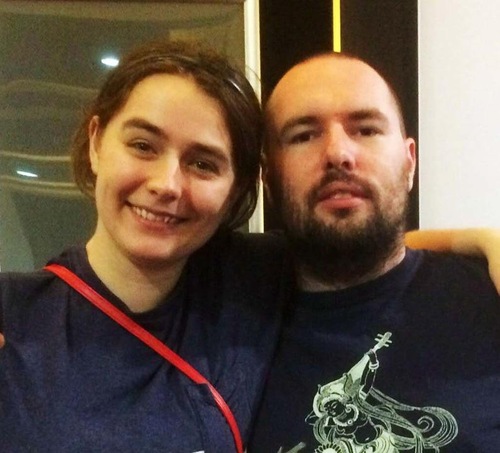 Lewis and his mother Natalie

'Thank you for giving me strength and courage'

James, is the husband of Marie, an Australian Falun Gong practitioner. He is a senior animal breeder. His wife's cultivation practice has also influenced him in subtle ways. He also follows the principles of Truthfulness-Compassion-Forbearance to resolve difficulties in his work.

A year and a half ago, a few days after their second son was born, James’s boss complained about him to the zoo owner. The owner had a talk with James and temporarily dismissed him from his supervisory position. The supervisor who succeeded him seemed to be very incompetent. James felt uncomfortable, because his boss did not communicate with him about being unhappy with his performance, and she never paid attention to his work. James began to feel unhappy and gloomy all day.

Mary talked with him about the principles of Truthfulness-Compassion-Forbearance, and encouraged him to read Zhuan Falun and other books by Master Li Hongzhi. James then changed his mindset and decided to be humble and treat others without any complaints. He also invited his boss to see his newborn son.

Soon after, the boss and the new supervisor left the zoo. James also resumed his position as a supervisor and got along very well with the new boss.

James wants to say to Master Li Hongzhi: “Thank you for giving me strength and courage and letting me have the ability to cope with things and forgive others.”

A Christian Thanks Falun Dafa's Master

Elizabeth Garton from South Australia tells everyone that after she sincerely recited “Falun Dafa is good! Truthfulness-Compassion-Forbearance is good,” her insomnia was cured.

“My insomnia is completely cured, because I chanted those words every night. I know that these principles are good. I was not just chanting these words, I read out the true meaning of them. I fell asleep after reading them. Last May, I also had hip replacement surgery. I did the Falun Dafa exercises and my body quickly recovered.

“Although I am a Christian, I wholeheartedly support Falun Dafa,” she said.

Ms. Elizabeth also said: “Two years ago, I went to watch the grandiose Shen Yun performance. I was attracted by the beautiful dance, dazzling costumes and amazing backdrop, but the most important thing is that I am very happy to learn a lot about ancient Chinese history.

Since then I have been very interested in Falun Dafa. I wanted to know more about Zhuan Falun and then I read Falun Gong (Revised Edition). Two friends of mine are Falun Dafa practitioners. They spend a lot of time discussing the CCP’s persecution of Falun Gong with me. After understanding the truth, I became a staunch supporter of Falun Dafa. Now, whenever I go, I tell my friends, family, and colleagues about Falun Gong.”