The exhibition consisted of 22 works inspired from true events. The artworks display the beauty of Falun Dafa’s guiding principles, Truthfulness-Compassion-Forbearance and call attention to the persecution of practitioners in China. Many government officials came to speak during the opening ceremony or sent greeting letters. 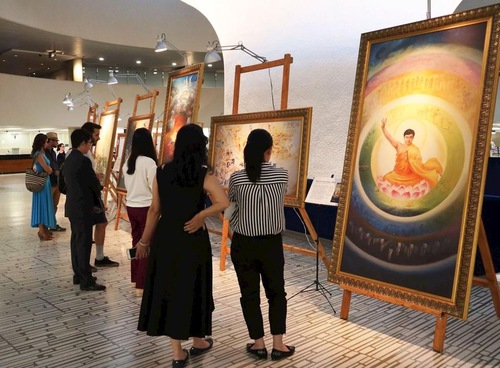 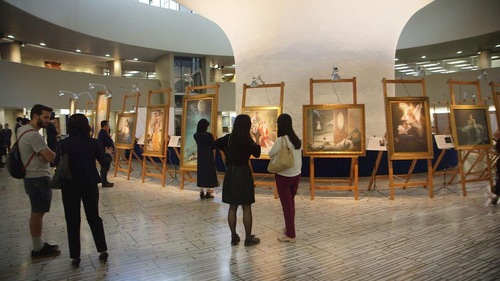 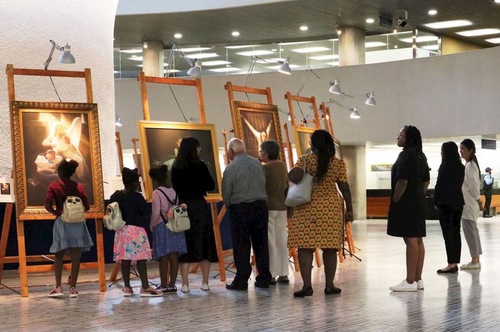 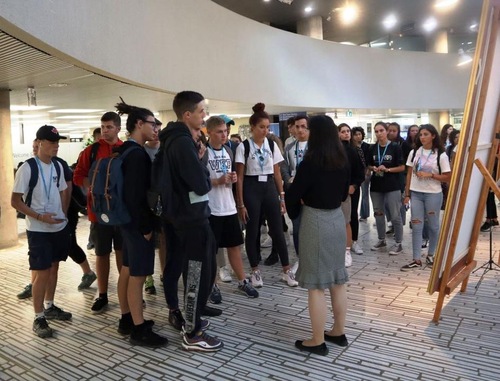 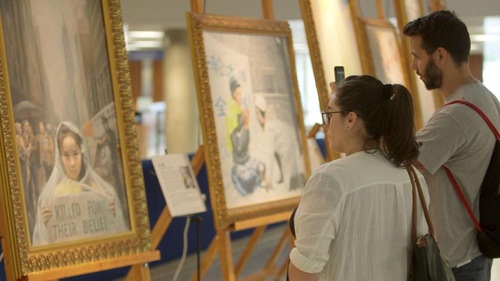 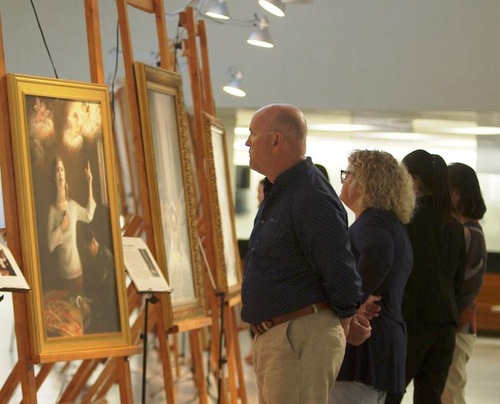 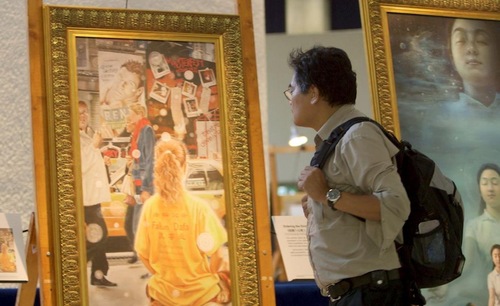 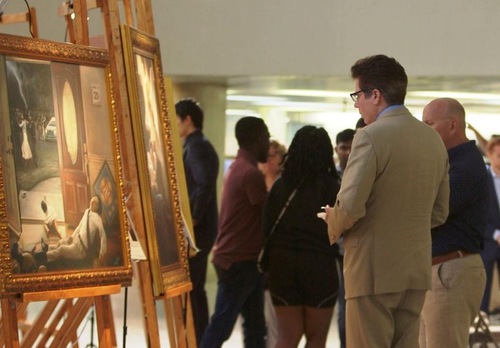 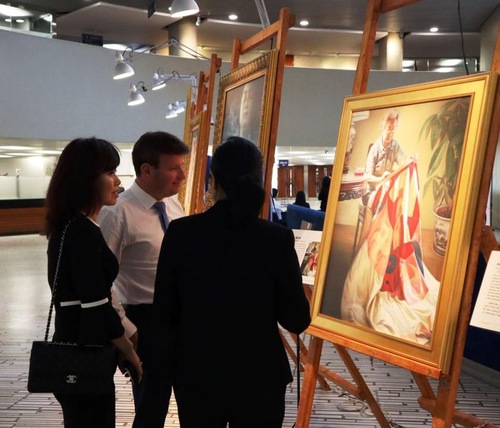 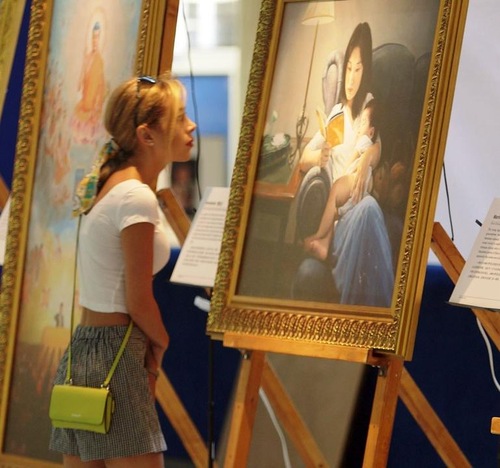 Attendees viewed the artworks and learned about the stories that inspired them. 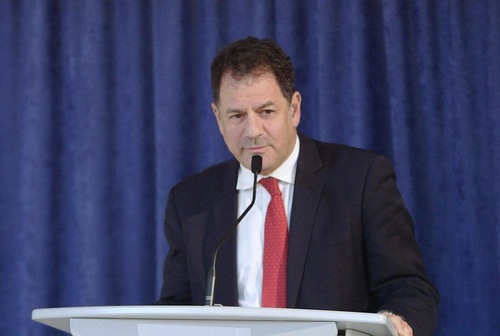 James Pasternak, Chair of Toronto's Infrastructure & Environment Committee, Chair of the North York Community Council, and also a Toronto City Councilor, spoke at the opening ceremony. He said, “On behalf of Mayor John and city councilors, I welcome you. We are honored to have you here.” 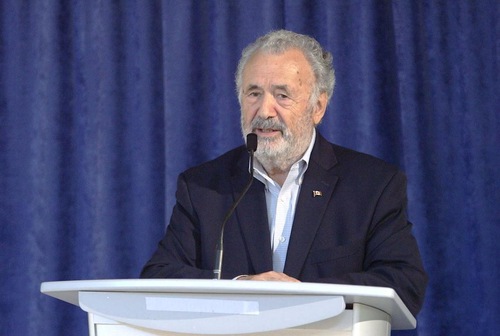 Consiglio Di Nino, former Canada senator, said, “I firmly support Falun Dafa and I have been doing that for 20 years. Falun Dafa tells us to tolerate each other and live in harmony.”

He praised the artworks and said, “I'm impressed with the very high artistic level of these works. They display the spiritual values that can guide us, this is particularly important.” 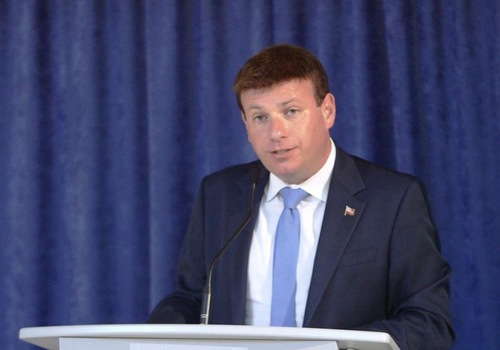 Roman Baber, Member for Provincial Parliament, spoke at the opening ceremony. He said because he was born in the former Soviet Union, he knew firsthand how brutal and oppressive communism is.

Roman Baber, the Member for Provincial Parliament, said, “We are obligated to help those who were deprived of their freedom, including millions of persecuted Falun Gong practitioners. I support Falun Gong.”

Mr. Baber also said, “I was born in the former Soviet Union. Although I was a child, I clearly remember how people were oppressed under the communist regime. The regime is brutal, tolerates no freedom and suppresses speech and basic human rights. It terrifies people.”

“The Entire World Should Know Such a Great Practice” 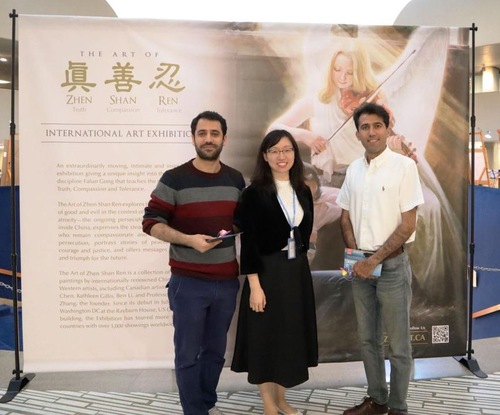 Mr. Mozafar (left) and his friend Mr. Beynaghi (right) had their photo taken after viewing the exhibition.

Mr. Mozafar carefully viewed every painting and discussed the deeper meanings behind each one with his guide. He took a photo of the exhibition banner and said, “I will show this to my friends. They will definitely be interested.”

Pointing to his friend Mr. Beynaghi he said, “He's really lucky. He just arrived in Toronto yesterday and came to the city hall today for his visa. He arrived just in time to see the exhibition.”

In the visitor's book, Mr. Mozafar wrote, “I feel very fortunate to attend this exhibition. I learned about the persecution of Falun Gong in China and that made me sad. I hope more people will have chance to know about Falun Gong, which is such a wonderful practice.” 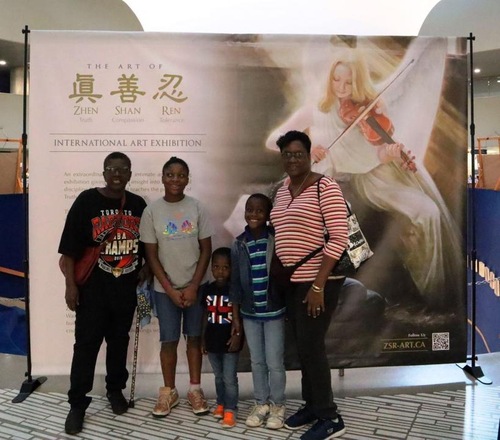 Ms. Beverly and her family said they appreciated every single artwork in the exhibition.

Ms. Beverly said, “This exhibition is very good and has inspired me. Every painting tells a story. Every single artwork is wonderful.”

She mentioned that she heard how Falun Gong practitioners are persecuted, but she never learned the details. She was shocked to learn that Chinese Communist Regime is removing organs from live practitioners and selling them. She thanked practitioners for letting her know many facts that she didn't know before.

Government Staff: Thank You for Bringing The Art of Zhen Shan Ren International Exhibition to Toronto 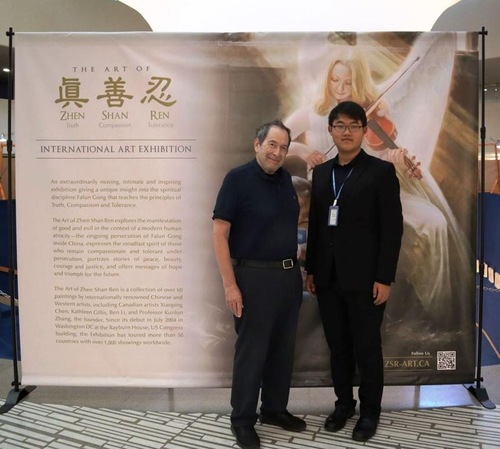 Mr. Sharpe visited the exhibition on his way to work. “These paintings are so beautiful. Thank you for bringing such great artwork to Toronto,” he said.

Mr. Sharpe works for government. He came to the front desk after seeing all works and share his feeling, “These paintings are so beautiful.” He said that he heard about Falun Dafa before, and came to exhibition to learn more.

He was troubled by the persecution of practitioners and said, “Harvesting organs from a live person violates international laws.” Before he left he shook a practitioner's hand and said, “Thank you for bringing such great artworks to Toronto.” 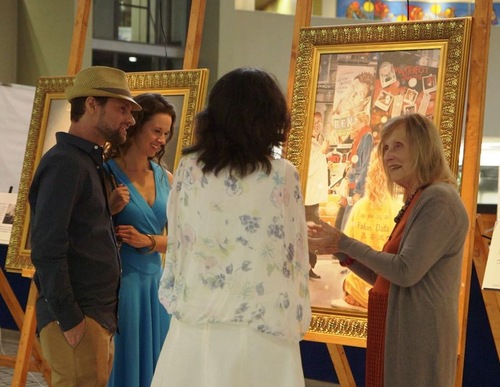 Painter Ms. Kathleen Gillis (first on the right) talks about what inspired her painting, “On the Streets of Manhattan”.

Nine works from Canadian painter Ms. Kathleen Gillis were selected for The Art of Zhen Shan Ren International Exhibition. Two of them were displayed in Toronto City Hall. She hopes that the exhibition can help people see practitioners' kindness and great tenacity.

She talked about what inspired her to create these paintings, “Our hearts ached when we learned the ongoing persecution of Falun Dafa practitioners in China in 2003. We wanted to help. Artists from various countries including myself gathered together and begin drawing.” When the crime about harvesting organs from live practitioners were exposed, we were shocked. We began depicting this crime with our brushes.

One of her works is titled, “A Gift.” In the painting, a practitioner sits in front of a Chinese embassy, silently protesting the persecution. Passersby who walked by were moved and one brought him a cup of hot coffee. Kathleen said that every week, she also sat in front of the Chinese Embassy in Ottawa. People occasionally brought her gifts like coffee, flowers, etc. The painting was inspired by her personal experience.

Her other work, “On the Streets of Manhattan” depicts the event in 2004 when practitioners from various countries traveled to New York City to raise awareness of the persecution. She said that she was deeply touched by a practitioner who serenely meditated on a noisy, crowded street. She was inspired to create this work.

Kathleen said, “Falun Dafa practitioners cultivate compassion and always think of others. Compassion is powerful, and can instantly transform adversity into hope. If we could treat others with kindness and support each other, then the evil side would have no power.”

She continued, “The Chinese communist regime is good at instigating hatred and attacks among people. This is their means to create terror. The list of organ harvesting victims is growing. The list includes those who were killed, as well as those who are alive – including the surgeons who performed the surgeries.”

Kathleen pointed out that over the past 20 years, the Chinese Communist regime has sent practitioners to forced-labor camps and prisons, and torturing them with over 100 inhumane methods. The goal was to force them to renounce their faith in Truthfulness-Compassion-Forbearance. She hopes that the facts displayed in exhibition can awaken the compassion in people's heart.

The Art of Zhen Shan Ren International Exhibition was first held in the U.S. Congress in Washington D.C., in July 2004. The artworks have been displayed over 1,000 times in more than 300 cities in over 50 countries, and has been acclaimed by government officials and artists from various countries. This the the third time that the exhibition has been held in Toronto City Hall.

“70-Year-Old Woman Sentenced to Four Years for Her Faith”