(Minghui.org) Today's news from China includes incidents of persecution that took place in 12 cities or counties in 8provinces, where at least 17 practitioners were recently persecuted for their belief. 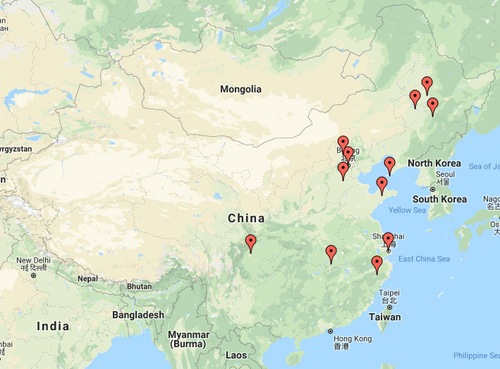 Mr. Jin Naichange from Jingoutun, Henanzhai Town in the Miyun District, was arrested at home by officers from the Henanzhai Police Station on the morning of September 5, 2019. His home was ransacked, and computers, printers, Falun Gong books, and other personal belongings were confiscated.

Mr. Jin was taken to the police station, and later transferred to the Miyun Detention Center.

Ms. Cai Yufang, 67, was arrested on September 3, 2019, and her home was ransacked. Her whereabouts are unknown.

Ms. Peng Yunzhou from Lanxi County was arrested on the morning of September 15, 2019. She is being held in the Lanxi Detention Center for 15 days.

Mr. Li Dongjun was arrested on September 10, 2019. He is being held in the Shanyou Detention Center in Songyuan City.

Zhu Feng, deputy director of the Beicheng Police Station, took a dozen officers and broke into the home of Mr. Song Xichun and Ms. Meng Xianqin on September 10, 2019. They ransacked the place, and confiscated Falun Gong books.

Police forced Mr. Song to take them to the hospital where Ms. Meng was visiting a patient. They then extorted 700 yuan from Ms. Meng.

Mr. Song Jinhua, from the Longshan Residential Community in Jinshitan, was arrested at home by nine officers from the Desheng Police Station on the evening of July 11, 2019. His home was ransacked, and a picture of Falun Gong's founder, Falun Gong books, a video player, and a cell phone were confiscated. They forcibly withdrew Mr. Jin’s blood and took the samples to the police station.

Mr Song was taken to the Dalian City Detention Center. He was released after ten days.

Mr. Meng Guangqing was arrested by six agents from the Sandaochuan Township government and the police on August 30, 2019. His home was ransacked, and Falun Gong books, informational materials, and other personal belongings were confiscated.

Mr. Meng was taken to the county detention center for ten days.

Ms. Zhou Cuizhen from Mayakou Village, Heluo Town was reported to the authorities for talking to people about the persecution of Falun Gong. She was arrested on the morning of September 15, 2019, and taken to the Heluo Police Station.

Mr. Zhou Ruiguang from Yunling Village and Ms. Zhou Jianhong from Haoxi Village were taken to a brainwashing center by officers from the Huzhen Town Police Station two weeks ago.

Ms. Huang Qiuzhen from Wenquan has been held in the Xianning City Detention Center since her arrest on March 7, 2018. She was secretly sentenced to a four-year prison term in September, 2019.

Mr. Liu Shehong and Ms. Zhao Xiujuan, a couple from the Xian’an District, were arrested in Jingzhou City on September 4. Officers from the Jingzhou Domestic Security Division ransacked their home, and confiscated their car. The couple is being held in the Jingzhou Detention Center.

Ms. She Xingmin from Dazhou City, Sichuan Province lives in Suning County, Cangzhou City, Hebei Province. She was arrested at her workplace, a mink clothing store, by officers from the Shang Village Police Station in Suning County and police from Sichuan Province on September 10, 2019. The officers took her husband home, made him open the door, and ransacked the place. They confiscated informational materials about Falun Gong.

Ms. Li Zhentao was arrested on September 12, 2019. She has been detained since then.

“Obtaining the Fa and Cultivating While Participating in Projects”