(Minghui.org) Falun Dafa practitioners from Indonesia, Singapore, and Malaysia met in Bali on September 21, 2019, to share their unique and precious stories about their cultivation experiences. Seventeen practitioners shared how they, with Master Li’s (the founder) help, continuously improved their character by looking within, and eliminating their attachments. 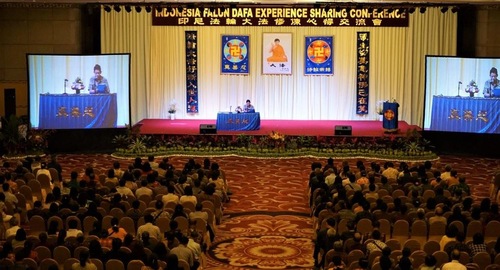 Dafa Lights Up a Dying Fire

Mr. Bai was previously addicted to gambling. He was poor, desperate, and suffered from severe depression. After he had lost all hope, he suddenly remembered the book Zhuan Falun, the main book of Falun Dafa, that a practitioner gave him six years prior. He somehow believed that reading this book would help him, so he started reading it all the time. He constantly improved himself based on Master’s teachings, quit gambling, and lived a healthy lifestyle. He thanked Master Li for giving him hope and giving him his dignity back. He now often goes to tourist sites to clarify the truth about Dafa and the persecution in China.

Bringing Good News to People in a Restaurant

When Ms. Qian, who is a chef, wasn’t busy with her work, she talked to her customers about Falun Dafa. After she started memorizing the teachings, her righteous thoughts became stronger. She helped the customers with their orders while chatting with them. The wisdom Master gave her helped her steer the conversation to the persecution, and to explain why it was wrong. Many Chinese people she talked with quit the Chinese Communist Party (CCP) and its youth organizations.

Finding Hidden Attachments and Eliminating Them

Budu’s father was a practitioner. When he was little, his father tried to help him study Dafa and read Zhuan Falun. He gradually was able to feel Master Li's compassion and realized that Zhuan Falun would teach him how to become a better person. After reading it many times, he went from being hot-tempered to being tolerant, considerate, and happy.

The process of telling people about the persecution of Falun Dafa was an opportunity for him to eliminate attachments, such as showing off, fear, and being shy and afraid of losing face. He believed that when there was a setback or a conflict, it was time for him to increase his belief in Master, and strengthen his righteous thoughts.

He quit his addiction to video games by learning from other practitioners during a Falun Dafa summer camp. From studying the Fa, he came to realize that the attachment to lust was interfering with him. He stopped it from growing deeper in his mind by strengthening his righteous thoughts.

“A Young Practitioner Embarks on His Cultivation Journey”