(Minghui.org) The Falun Dafa Club was one of over 250 student clubs and organizations that had booths to welcome new students to McGill University's Activities Night on the evenings of September 11 and 12, 2019.

The Falun Dafa Club, established in 2017, has participated in this popular event three times now. Dafa practitioners talked to students about the practice’s many physical and mental benefits. Quite a few students expressed an interest in learning more about Falun Dafa and registered for the free introductory event and exercise teaching workshop. 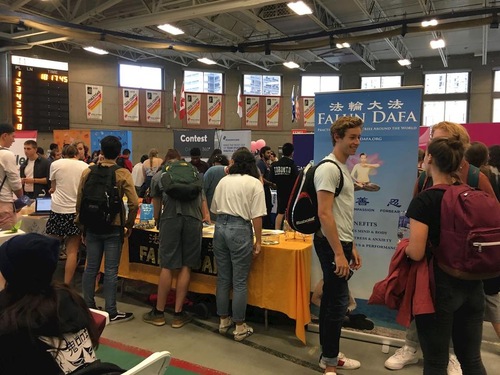 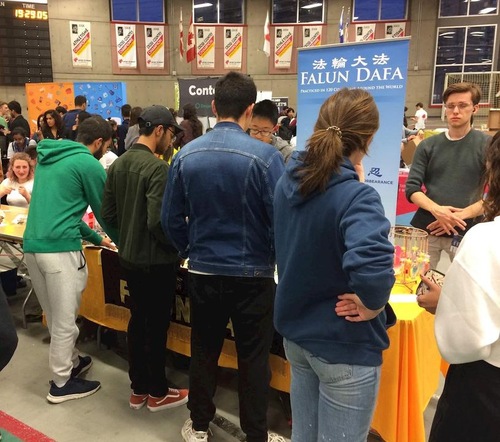 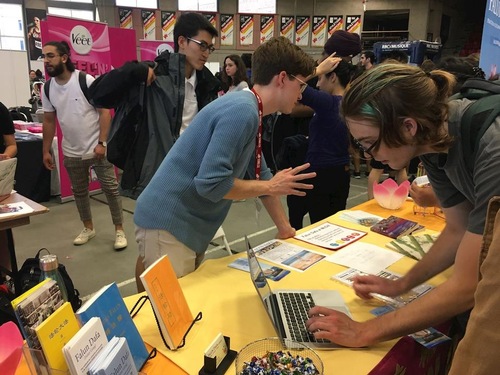 The Falun Dafa Club's presence at Activities Night gave students from China an opportunity to learn the truth about the practice, which has been brutally persecuted in China since 1999. The young practitioners’ calm and rational demeanor stood in contrast to the Chinese Communist Party’s (CCP) demonized portrayal of Falun Dafa. Unlike in previous years, more Chinese students paused at the Falun Dafa booth and asked questions about the practice. Some took copies of the Nine Commentaries on the Communist Party. Some even said they would read Zhuan Falun, the main book of Falun Dafa. 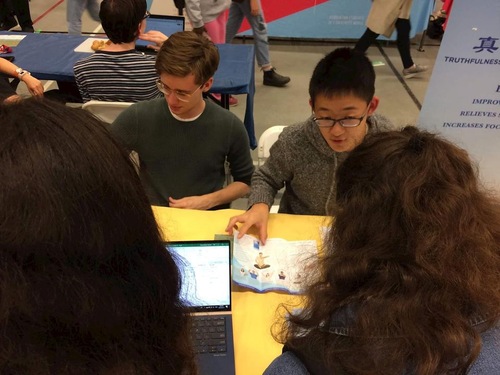 Anna, a member of the Falun Dafa Club, said, “In prior years, the students from China mainly stood at a distance, and some took pictures. It’s not the case this year.

“Many more Chinese students have approached our booth and asked questions about Falun Dafa,” she added. “They seemed genuinely interested and had very good questions.”

I Support You and Stand with You

A student from China who is a member of McGill’s Chinese Students’ Society asked if he could take a copy of the Nine Commentaries on the Communist Party for a relative.

He said that he did not support the CCP and was glad to see Falun Dafa at McGill. He also mentioned that during his work in the association, he noticed that many Chinese students, even though they were already in Canada, were still afraid to learn about Falun Dafa as they’d been misled by the CCP’s propaganda and can't tell the difference between the Party and China. He added that he hoped that in the future, China would enjoy democracy and freedom.

A student from Hong Kong stopped by and said to the practitioners, “I am with you!”

During the two-day event, many Western students who had heard about Falun Dafa and the CCP's persecution in China stopped by. A number of them left their names and telephone numbers for the next free teaching workshop.

Many students picked up the small buttons that read “I Support Falun Dafa” and put them on their backpacks. Others stopped and encouraged the practitioners. Some who were hearing about Falun Dafa for the first time said that they were drawn by the practice's principles of Truthfulness, Compassion, and Forbearance. As one young woman admitted to a practitioner, “I am signing up because you look so peaceful right now!”

Over 30 students from diverse nationalities, including Chinese, signed up to be notified of future events.

The Falun Dafa Club at McGill University offers free teaching and has group practice every week. Introductory workshops, film screenings, and other events will be held during the coming semester.

Falun Dafa was first taught to the public in 1992. Nearly 100 million people across China were soon practicing it after experiencing improvements in their health and character. Jiang Zemin, former head of the CCP, perceived the spiritual discipline's growing popularity as a threat to the CCP's atheistic ideology and issued an order to ban Falun Dafa on July 20, 1999.

Minghui.org has confirmed the deaths of thousands of Falun Dafa practitioners as a direct result of the persecution over the past 20 years. Due to the CCP's information blockade, and the resulting difficulty in getting information out of China, the actual number of deaths is suspected to be much higher. Many more practitioners have been imprisoned and tortured for their faith.

There is concrete evidence that the CCP sanctions the harvesting of organs from detained practitioners and other prisoners of conscience, who are murdered to supply the organ transplant industry.

Under Jiang's personal direction, the CCP established the 610 Office, an extralegal security organization with the power to override the police and judicial systems, and whose sole function is to carry out the persecution of Falun Dafa.