(Minghui.org) Falun Dafa practitioners in Romania traveled to Bran on Saturday, September 7, 2019, to introduce the practice and raise awareness of the 20-year-long persecution of Falun Gong in China.

Bran is a tourist town located below the hills that hold Bran Castle, a national monument and landmark in Romania. 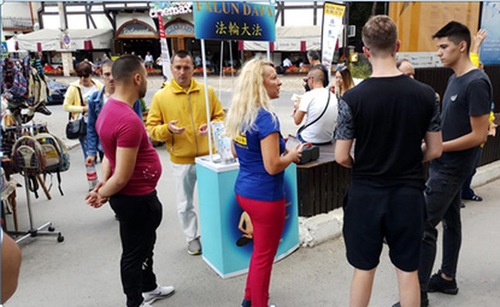 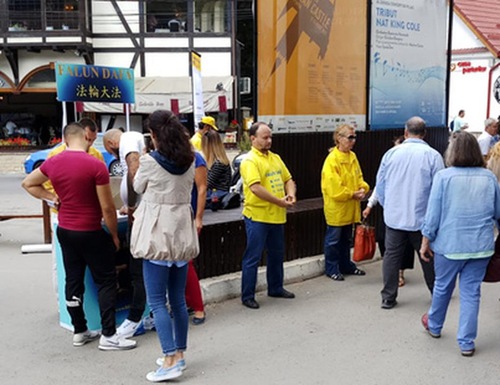 Bran residents and visitors wait in line to sign a petition opposing the persecution of Falun Gong. 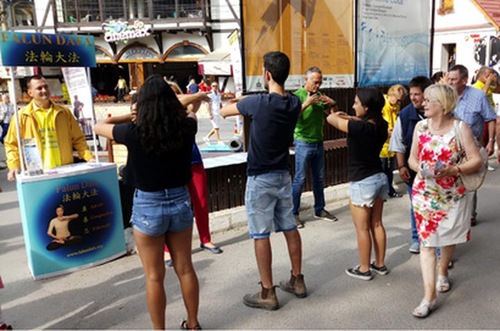 A man was very upset over China’s large-scale state-sanctioned forced organ harvesting crimes, knowing that countless prisoners of conscience have been murdered for their organs. He signed a form that will report Jiang Zemin’s crimes to the United Nations. Jiang was the Communist Party leader who ordered the persecution of Falun Gong in 1999.

A few minutes later, the man returned with his wife and two children so they could all also sign the petition.

An Indian woman stopped and asked a practitioner what the flier was about. After she learned that the flyer was about Falun Gong and the persecution, she told the practitioner that she has lived in Chicago for seven years and knows about Falun Gong and its health benefits. She signed a petition opposing the persecution and asked for contact information so she could learn the exercises in Chicago.

“Paralyzed Man Ordered to Serve One Year for His Faith, Wife Not Told Where He Is”