(Minghui.org) The Tian Guo Marching Band, which is comprised of Falun Gong practitioners, participated in the annual StreetFair parade in Chatswood, Australia, on Saturday, September 7, 2019. StreetFair is an important part of the Sydney suburb's annual Emerge Festival.

This year marks the 22nd Emerge Festival, which is hosted each year by the Willoughby City Council. It is the largest cultural and entertainment event on Sydney's north shore, and the parade is a highlight that attracts hundreds of thousands of viewers. 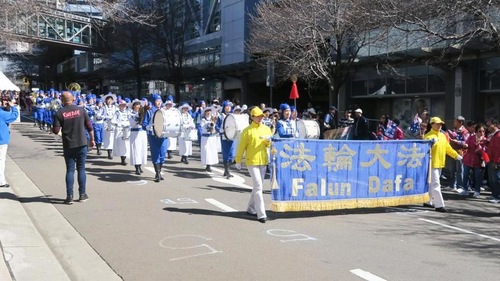 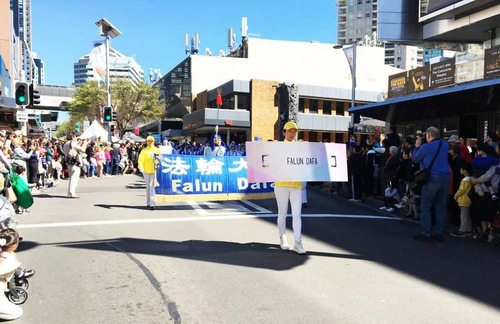 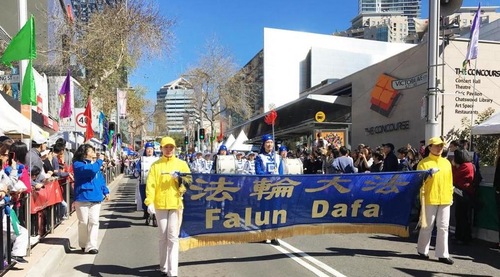 The Tian Guo Marching Band participates in the parade in Chatswood, Sydney.

Local resident Josie and her friends selected one of the best viewing locations early in the day and waited in their spot for the parade to start. Josie does volunteer work for the local council.

Josie was able to name many of the groups that would participate in the parade and she also knew about the Tian Guo Marching Band. “I saw the band in the parade last year,” she said. “It is beautiful. They should be in the front of the parade.”

More than 800 people from various groups joined this year's parade. Josie was especially impressed when she saw the Tian Guo Marching Band. “This band is great,” she said. “The team is neat. The costumes look nice. The music is very good. I love this band!” 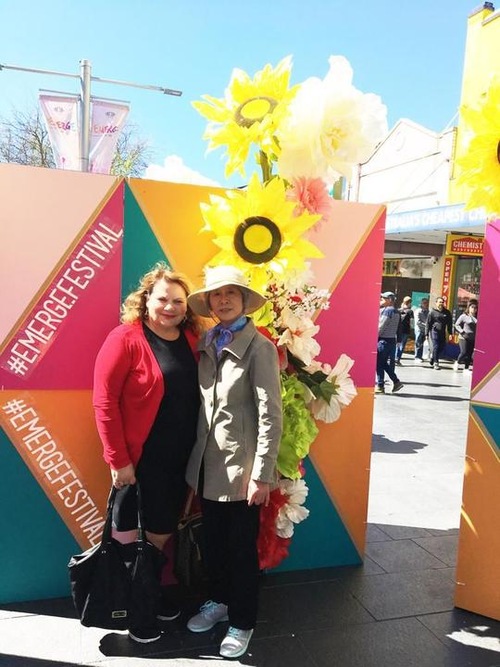 “Falun Gong is an ancient practice with five sets of exercises,” the practitioner replied, adding, “Practitioners follow the principles of Truthfulness-Compassion-Forbearance in their daily lives. Practicing Falun Gong can make one healthy physically and mentally.”

“Can you tell me how to learn Falun Gong?” Josie asked.

The practitioner answered, “There is free teaching in front of Chatswood Library from 6:30 to 8:30 every morning.”

Josie was happy to hear this and said she would bring her sister to the library one morning to learn Falun Gong.

She was appalled that Falun Gong is persecuted by the Communist Party in China. “The persecution must be wrong,” she said.

Josie also warmly introduced the practitioner to staff members of the multicultural center in Willoughby and said she hoped practitioners could offer free exercise instruction to community organizations.

She posed for a photo with a practitioner and quietly told her, “You are my new friend today.”