Practitioner in the Netherlands: Everyone Can Benefit from Falun Dafa

(Minghui.org) Over 1,000 practitioners of Falun Dafa (also called Falun Gong) from Europe and other regions gathered in London for the 2019 European Experience Sharing Conference. The practitioners also held public activities to inform people of the persecution of Falun Dafa perpetrated in China by the Chinese Communist Party (CCP).

Gökhan Tunc from the Netherlands was one of the practitioners who went to London. 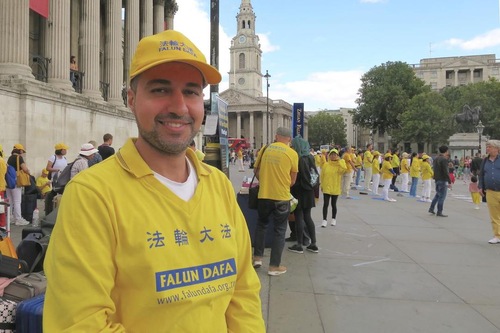 A Minghui correspondent met Gökhan Tunc on September 1. He had just participated in an activity outside the Chinese Embassy, which he found to be an ideal place to tell people about the ongoing suppression of Falun Gong practitioners in China. He said it was important for embassy staff to hear the message as well, as they were also misled by Chinese government propaganda that maligns Falun Gong.

Gökhan, who is originally from Turkey, now lives in the Netherlands. He started to practice Falun Dafa in 2016. He recalled that when he first read Zhuan Falun, the main book of Dafa teachings, he felt that the founder of Falun Dafa, Mr. Li Hongzhi, was sincerely telling people the true principles of the universe. He applied these principles in his daily life and found it especially beneficial.

“The changes were subtle in the beginning,” he said. “The more I study the teachings, the greater the changes I experience, physically and mentally, and in the process I gained a deeper understanding of the principles.”

Gökhan said the greatest benefit he experienced was finding inner peace and being able to control his temper in almost all cases. This was a major change, he shared, as he used to be very negative. Now, when he encounters a problem, he would remember the teachings of Falun Dafa and use them to guide his actions. This helps him to remain calm.

As Gökhan had benefited tremendously from practicing Falun Dafa, he was saddened to learn that practitioners in China were being tortured for holding the same beliefs. He said the Chinese government is not only persecuting their citizens but also destroying universal values.

“After 12 Years of Incarceration, 40-Year-Old Man Gets Another Five Years for Not Renouncing His Faith”