Falun Dafa Provides Peace and Harmony in the World

(Minghui.org) This year marks the 20th anniversary of the beginning of the persecution of Falun Dafa in China. On July 20, 2019, more than 2,000 practitioners of Falun Dafa from across Taiwan held a grand parade in Taipei.

The practitioners were from many walks of life and had different life experiences, but they have all benefited greatly from this wonderful practice. They have the same goals - sharing the beauty of Falun Dafa with others, and bringing the persecution to an end.

Taiwanese practitioners walk through Taipei’s cultural, educational, and financial districts on weekends in all kinds of weather to introduce people to this spiritual practice. They clarify the facts about the persecution of Falun Dafa by the Chinese Communist Party (CCP) and call for justice and an end to the persecution. 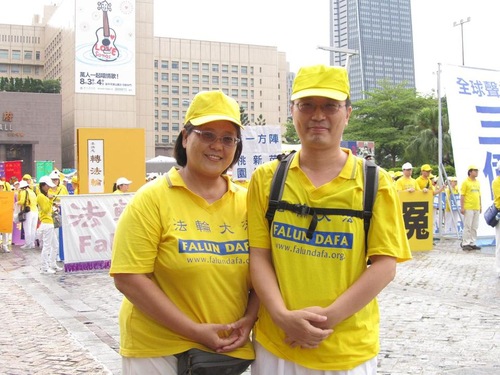 Mr. Huang Yaozhong is a computer software engineer. His wife, Mrs. Cai Fuhui, was in ill health and they sought many religious practices to try to help her, but without success. Mr. Huang kept searching, until one day in 2002, he came across a copy of the book Zhuan Falun in a bookstore. He couldn’t put the book down as soon as he started reading, and brought the precious book home to share with his wife.

Mr. Huang said, “The book Zhuan Falun is amazing. No religious practice or Buddhist scriptures I explored in the past could answer my questions. In the process of sincerely reading Zhuang Falun, I continually became enlightened to new principles and found answers to my questions. I feel the inner meaning of the book is so broad and profound, like an inexhaustible treasure. It is extremely wonderful!”

Mr. Huang was excited to attend the nine-day seminar and during those days. As soon as he got home, he watched the videos of Master Li’s lectures and exercise instructions for hours. His joy of obtaining the great Fa of high virtue was beyond human words.

A few days after learning and performing the five sets of exercises, Mr. Huang’s serious allergic rhinitis since middle school was unexpectedly cured without any treatment.

He said, “At the beginning, especially while doing Exercise Two (Falun Standing Stance), I couldn’t stand still, and my limbs would be shaking constantly. In addition, streams of tears and mucus would run down my face. I persisted. A few days later, the allergies that had been bothering me for a long time were cured! It was indeed magical!”

Practicing Falun Dafa has not only brought Mr. Huang physical well being, but also changed his outlook and attitude on life. He continued to work as hard as he could, but his motivation and drive were no longer merely for appraisal and career advancement. He became physically and mentally at ease.

He said, “After I let go of attachments to reputation and personal gain, I felt clearly that illnesses and bad substances were departing from me. I felt a state of calmness.”

Mrs. Cai Fuhui had poor health since childhood. At age 20, she suffered a spine injury from a car accident and also had a stomach ulcer, arrhythmia, edema and other health problems.

When doctors of western medicine could not cure her, she went to see doctors of Chinese Traditional Medicine. A doctor of Chinese Medicine told her that her heart, liver, lung, spleen and kidney were diseased, and there was no medicine that could help her.

She went to see a doctor for back pain, and the doctor told her, “It will probably be like this for the rest of your life. Don’t lift heavy things. Don’t stand for too long or lie down for too long.” Mrs. Cai’s heart was chilled with disappointment, “Wouldn’t I now be considered disabled?” Her life was very painful and miserable.

Her husband, Mr. Huang Yaozhong, had helped find many religious practices, but none of them helped her. She kept telling him, “This one doesn’t work. Nothing works without the Fa. I want a genuine Fa.”

Mrs. Cai said, “I thank Master Li for heeding my anxious calls. My husband and I were fortunate to obtain Falun Dafa in the summer of 2002.” Soon after she started practicing Falun Dafa, all of her painful illnesses were gone without going through any treatment.

Mrs. Cai said, “After I started practicing Falun Dafa, I finally came to understand that the purpose of life was to return to one’s original, true self. I came to understand the true meaning of life, and my life had a bright outlook. Every day is fulfilling, and I am always energetic. I feel so lucky and I am grateful to be a Falun Dafa disciple.”

Mr. Huang and Mrs. Cai attend activities to raise awareness of the persecution every year on July 20, and find the activities very meaningful.

Mr. Huang said, “The rally and parade allows more people an opportunity to know about Falun Dafa and understand how wonderful it is. Meanwhile, besides exposing the Chinese Communist Party’s corrupt nature, the activities are also calling for conscience. I believe this is making a big difference in the world.” 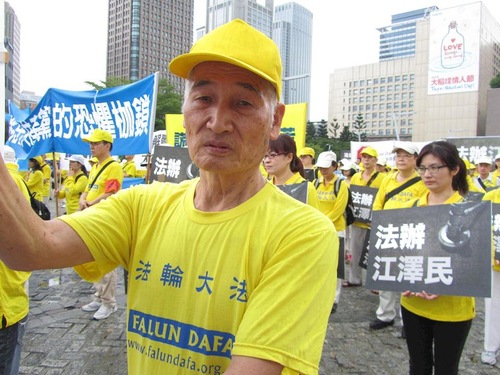 Mr. Zheng Jianzhi, 77, previously had a serious gambling addiction which began in his youth. As the saying goes, “One is bound to lose the gamble nine out of ten times.” Mr. Zheng had lost a lot of money in gambling. His family did not get along well because of this, and arguments between him and his wife were common.

Life was miserable, and Mr. Zheng wanted to quit the addiction. However, no matter how many times he tried, he could not succeed.

He previously went to the hospital twice a week to have his nasal allergy problem treated, but as soon as he began to practice, the problem disappeared! As for his gambling addiction, it was completely removed after he attended the Falun Dafa nine-day seminar. He said, “Mahjong? I don’t even want to lay my eyes on it anymore, let alone play it!”

Witnessing his fundamental changes, his wife began practicing Falun Dafa six months later. Mr. Zheng said, “My wife had many illnesses, and received treatments at hospitals every week. After beginning cultivation practice, all her illnesses were cured.

“Our son, daughter, and daughter-in-law witnessed my changes and my wife’s recovery, and they found Falun Dafa wonderful and all wanted to practice. Now my entire family is practicing Falun Dafa.”

He added, “My son, daughter, and daughter-in-law have joined the anti-persecution parade today. This is good. I hope more people can see that Dafa practitioners are healthy and kindhearted people.”

Truthfulness-Compassion-Forbearance Will Fill the World with Peace and Harmony 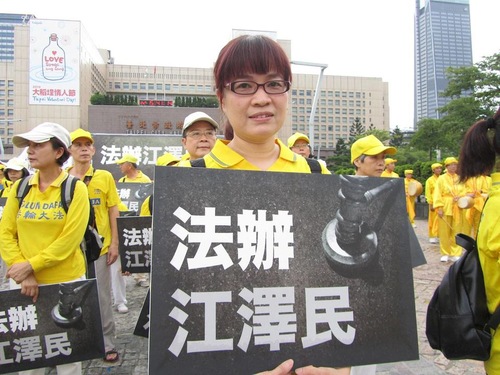 Mrs. Zhong Huiqin hopes that Falun Dafa will spread widely and that the world will become more peaceful.

Falun Gong practitioner Mrs. Zhong Huiqin is from Hsin Chuang City. During her childhood, she fell from a staircase and injured her sciatic nerve, and consequently she couldn’t stand or sit for long periods of time.

Ten years ago, Mrs. Zhong witnessed her father-in-law, Mr. Zheng Jianzhi’s changes after practicing Falun Dafa. In 2009 she and her family began practicing also. To her surprise, not long after, her problem of back pain was gone. She felt light and pleasant mentally and physically.

Mrs. Zhong said her family attends this activity every year. She said, “The more people know Falun Dafa is good and Truthfulness-Compassion-Forbearance is good, the more peaceful and harmonious the world will become.”