(Minghui.org) The Lunar Mid-July (Chungyuan) Festival has been celebrated for 165 years in Taiwan. To celebrate this tradition, the annual Water Lantern Parade was held in Keelung City on August 14, 2019. President Tsai Ing-wen and Keelung Mayor Lin Yu-Chang attended the opening ceremony.

When the Falun Dafa procession passed the podium, the host introduced it to the audience, “Every year Falun Dafa and its Tian Guo Marching Band form the largest parade procession. They bring a lot of color and excitement to the city of Keelung.” 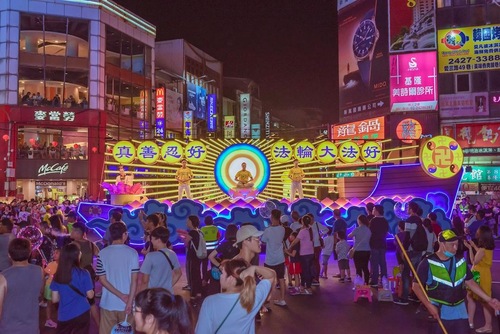 The exquisite float made by Falun Gong practitioners 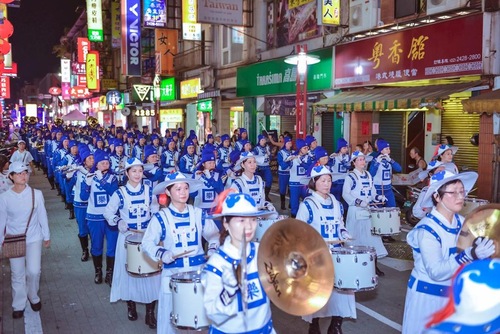 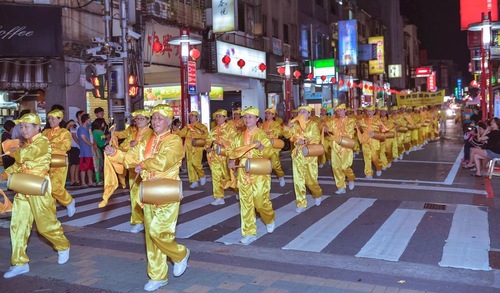 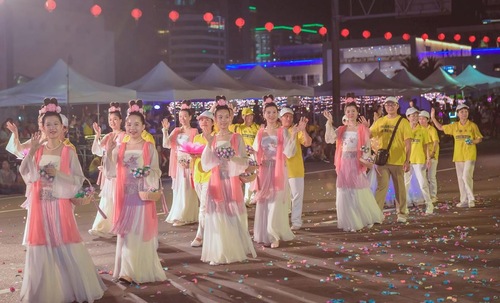 This year's Falun Dafa float added a light circle symbolizing a Buddha’s World in the middle section of the float. The practitioners demonstrated the exercises on the float. The Tian Guo Marching Band’s uniform movement and calming music, and the lively drumming from the Waist Drum Team, touched the spectators’ hearts.

The spectators had big smiles on their faces. Some people bowed to say thanks and some lit firecrackers to welcome the practitioners. The crowds cheered loudly to show their support for Falun Dafa.

When the practitioners took a break, they exercised together. A young man from Shanghai was surprised to see Falun Dafa practitioners being out in public, for he thought that it wasn’t allowed because of the ongoing persecution in China. The practitioners told him why the persecution was wrong, and that China was the only country that banned the wonderful practice.

“Germany: Introducing Falun Dafa to the Public and Raising Awareness of the Persecution”