(Minghui.org) Falun Gong practitioners in Quebec City, Canada, held activities at the Place d'Armes on August 10, 2019, to introduce the ancient spiritual practice and expose the Chinese Communist Party's (CCP) persecution. Many tourists from around the world visit this famous historic site and voiced their support for practitioners' efforts.

The practitioners demonstrated the five Falun Gong exercises as the Tian Guo Marching Band played between each one. Drawn to the music, people came to listen and took photos and videos. They read about Falun Gong and asked questions. Each musical selection received warm applause. 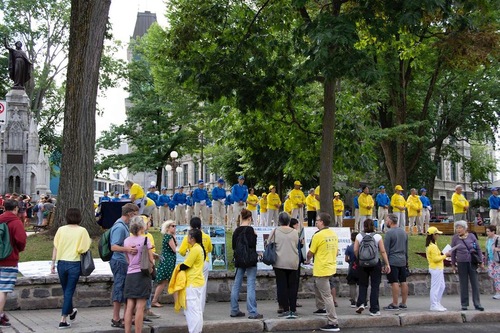 Practitioners hold activities at the Place d'Armes in Quebec City on August 10, 2019. 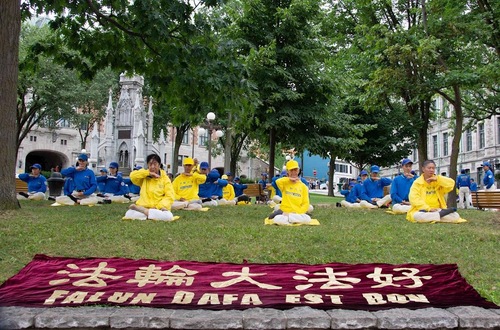 As part of the day's activities, practitioners demonstrated the exercises. 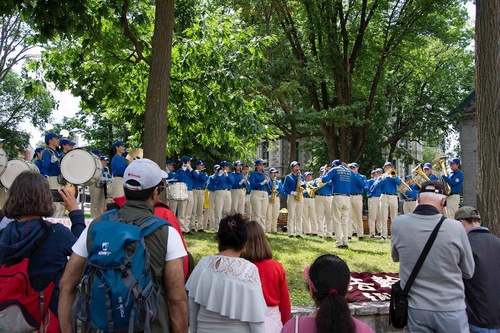 Many people stopped and read the information about the persecution, including the forced organ harvesting from Falun Gong practitioners. They took photos of the display boards and said they would help by letting others know about it. 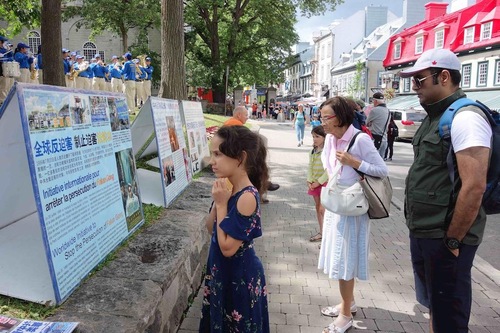 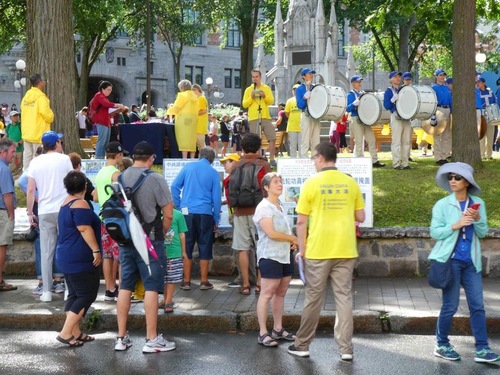 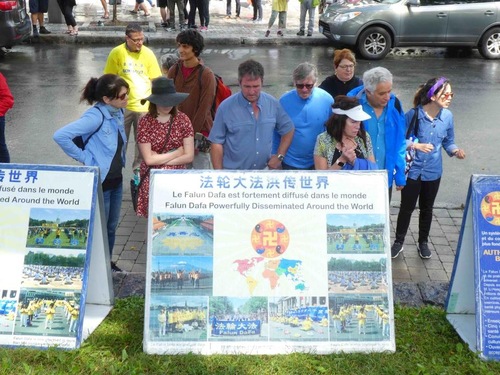 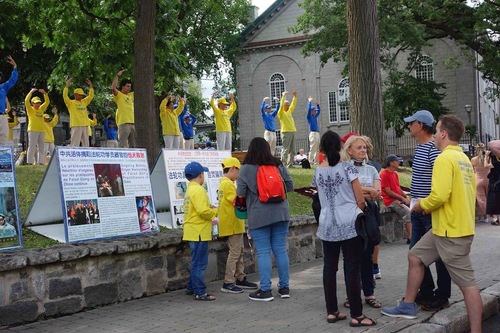 Many people read the display boards and asked practitioners questions.

Mr. Chen from Taiwan said, “We Taiwanese support Falun Gong. Many people in Taiwan practice it. We know it's great and has health benefits. The Chinese Communist Party is evil!”

A father and his son from China read the information carefully. The father said, “Everyone in China knows the CCP is terribly wicked. It's a corrupt and violent regime. I can't wait for it to collapse.” When a practitioner asked if he had quit the Party organizations, he replied that he had—a long time ago.

A family of four from Taiwan stopped to read the information. The father said that they had heard about the CCP's organ harvesting. When they saw the special entrance for organ transport at the Xinjiang airport, they felt it showed that organ harvesting was being conducted on a large scale. He strongly supported Falun Gong practitioners' efforts to stop the persecution. He said, “I'm certain the CCP will collapse!”

Eillien from the U.S. said that the CCP's organ harvesting from living people was evil beyond imagination. She said, “Western countries should impose sanctions on China. It's great Falun Gong practitioners have exposed the evil. You have done the right thing. Let more people know! Great job!”

This was the first time that Jose and Sophia from France had ever heard about the persecution. Jose said he knew the CCP has always persecuted spiritual beliefs and thought that the persecution was an extension of the Cultural Revolution. “The Cultural Revolution never ended. The Party is using the exact same tactics. They arrest people who don't give up their ideas. The CCP is the largest autocracy.”

Jose went to Xinjiang two years ago and saw how the Uyghurs were monitored and persecuted. The large number of surveillance cameras on every street left a deep impression on him. He said he knows that the CCP is afraid of freedom of thought. “If people were allowed the freedom of thought, they would clearly see the government's problems.”

Jose expressed his support and appreciation for Falun Gong practitioners. “Thank you for telling people about the persecution. It's so important!”

A young couple from Spain told a Falun Gong practitioner, “The CCP uses its power and money to silence many governments who want to do business with China.” They thanked practitioners for telling them about the persecution.

Local residents Serge and Odette said that freedom of thought and belief are rights people are born with and the CCP has no right to deprive people of their choices. Both of them said everyone should condemn the persecution. 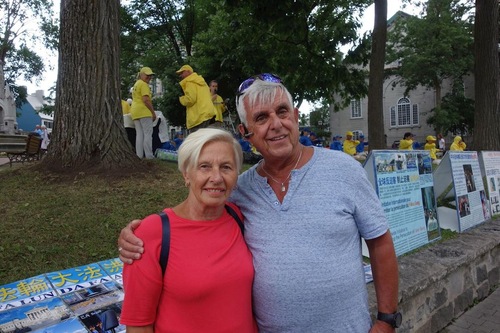 Serge and Odette said that everyone should condemn the persecution of Falun Gong in China.

“Heilongjiang Woman on Trial for Her Faith, Family Barred from Attending Hearing”

“Liaoning Woman Indicted for Her Faith in Falun Gong”