(Minghui.org) From July 19-21, practitioners in Turkey held various peaceful activities in Turkey's two most major cities, Istanbul and Ankara, to commemorate 20 years of peaceful resistance to the Chinese regime's persecution of Falun Gong.

On July 20, 1999, the systematic persecution of Falun Gong (also called Falun Dafa) was initiated by former Chinese Communist Party (CCP) leader Jiang Zemin. Thousands of practitioners have died as a result of the persecution and countless have been imprisoned and tortured. An unknown number have been victims of the CCP's state-sanctioned crime of forced organ harvesting for the transplant industry. 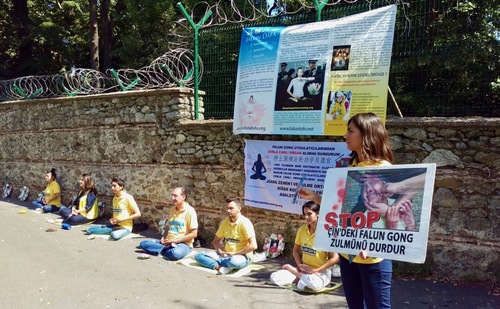 Practitioners protest the persecution at the Chinese Consulate in Istanbul.

On Friday, July 19, a group of practitioners gathered in front of the Chinese Consulate in Istanbul. Practitioners peacefully called on China to stop the persecution in China. Several demonstrated the Falun Gong exercises while others distributed leaflets to passersby. Many motorists stopped their cars and said that they wholeheartedly support practitioners in their efforts to bring an end to the persecution. Several were visibly moved when they heard of the extent of the brutality of the persecution.

A gentleman passing by the consulate said, “China also persecutes the Uighur Turks. What you are doing is a sacred thing and I support you from my heart. If one day a war against China were to come, I can swear that I would go first because of the persecution.” A practitioner replied, ’Falun Gong practitioners, Uighur Turks and other prisoners of conscience are held in the same concentration camps, so they are struggling together.” 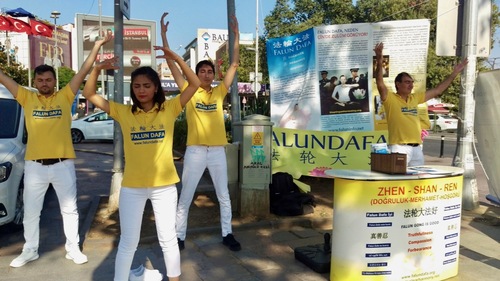 Exercise demonstration at the practitioners' activity on Beşiktaş Square 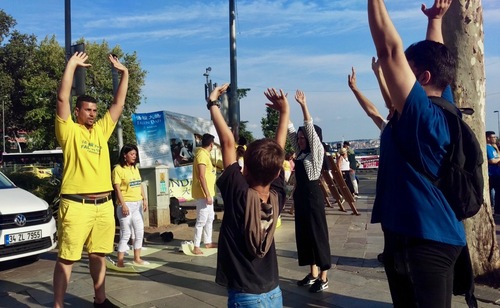 On Saturday July 20, practitioners demonstrated the Falun Gong exercises in the busy central district of Besiktas Square. They collected signatures on a petition calling for bringing Jiang Zemin to justice. 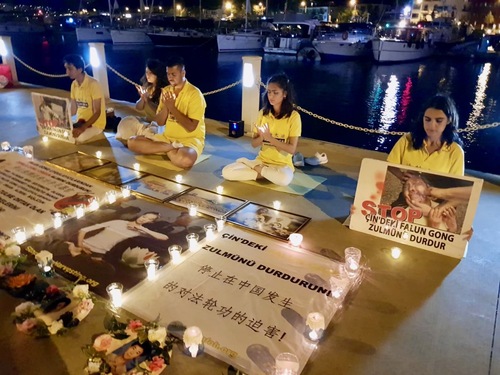 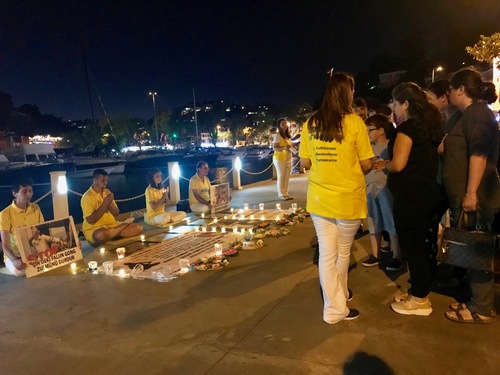 on the evening of July 20 near the Istanbul Chinese Consulate. The vigil honored the memory of the many Falun Gong practitioners who lost their lives in China due to the brutal persecution.

When a 16-year-old girl heard about the persecution, she couldn’t stop her tears and asked what she could do to offer support. She also said that she would definitely come to the exercise site to learn Falun Dafa.

On July 21, practitioners gathered in Ankara, Turkey’s capital and second largest city, at Ahlatlibel Park, the city's most popular park.

During the activity, practitioners did the exercises together in commemoration of the 20th anniversary of the persecution, and collected signatures calling for an end to the brutalities in China. 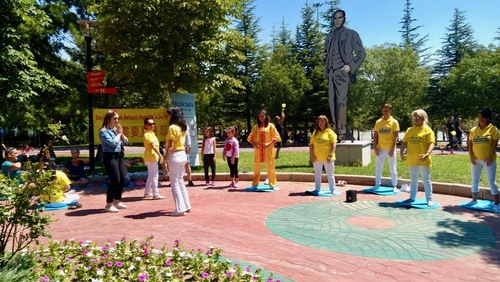 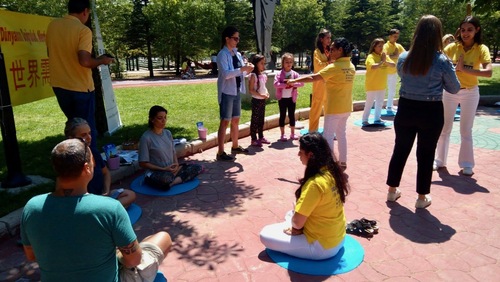 Ankara citizens enjoyed the exercises and many people stopped to learn them. 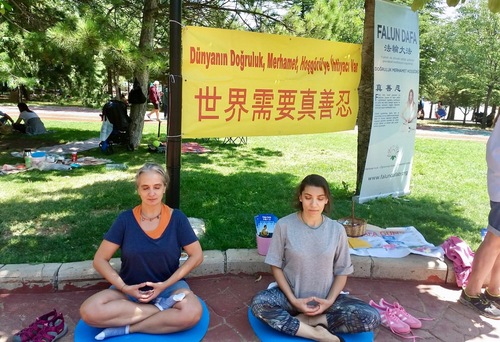 People of all ages in Ankara learned the exercises. Many said that they would definitely participate the group exercises on a regular basis and wanted to learn more about Falun Dafa. 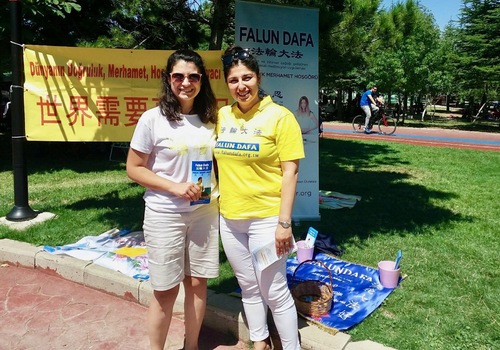 Buse, an engineer who learned all five of the exercises

Buse, an engineer from Ankara, said that she had problems with stress and clenched her teeth at night. She was delighted to hear that Falun Dafa had the solution to this problem and learned all the exercises right away. She took other informational materials about Falun Dafa and said she planned to do the exercises at home. 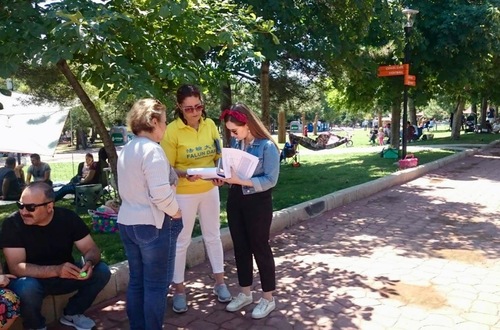 Many people signed a petition calling for an end to the persecution in China.

Falun Dafa, also known as Falun Gong, is a traditional practice of ancient Chinese origin, for mind and body development. The practice involves slow, gentle movements and meditation. Falun Gong is based on the principles of Truthfulness-Compassion-Forbearance. The practice was first introduced by Master Li Hongzhi in China in May 1992, and due to its extraordinary effects, the practice spread quickly throughout China. The beneficial effects on the individual’s physical health, spiritual and moral development, as well as the positive effects in society have made Falun Dafa recognized worldwide. Today, millions of people in more than 100 countries around the world practice Falun Dafa.

The CCP, which rules China with lies and violence, was disturbed by the millions of people who strove to follow the principles of Truthfulness-Compassion-Forbearance. On July 20, 1999, the CCP mobilized all mechanisms throughout the country, initiating a systematic and extensive brutal persecution of Falun Gong practitioners. Lies and slander suddenly covered the whole nation. Numerous practitioners have exposed to severe repression, arbitrary detention, forced labor and torture. According to reports published on the Minghui website, as of July 22, 2019, 4,316 Falun Gong practitioners are confirmed to have died as a result of persecution.

Falun Dafa practitioners from all over the world, with the support of NGOs, elected representatives, human rights lawyers, judges and conscientious individuals from many platforms, have called on China to stop the persecution on the 20th anniversary of the genocide.

There are thousands of Falun Gong practitioners, Uighur Turks, Tibetans, and Christians who are still held in concentration camps because of their beliefs and are waiting to be reunited with their families.