Local tradition calls for a morning parade made up of various groups from local businesses, educational and cultural institutions, and schools. The Falun Dafa group offered a unique display of traditional Chinese culture. 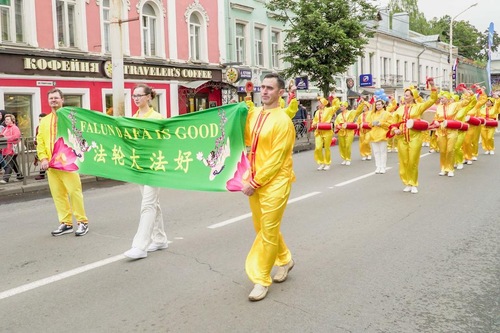 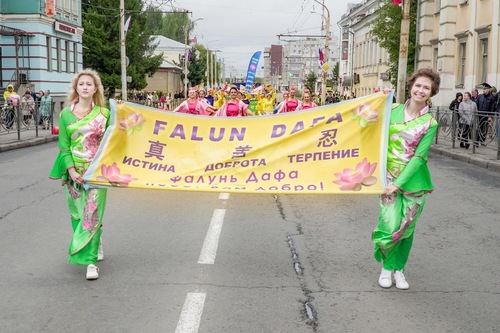 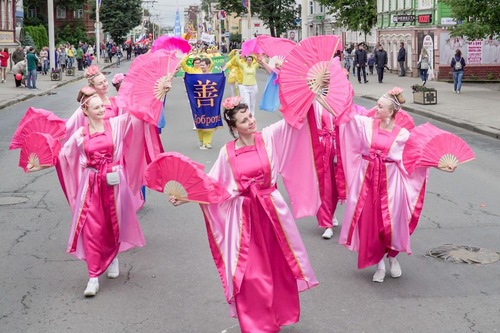 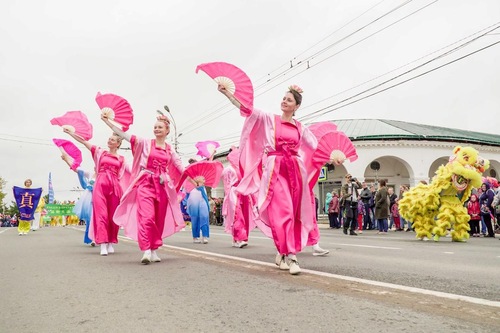 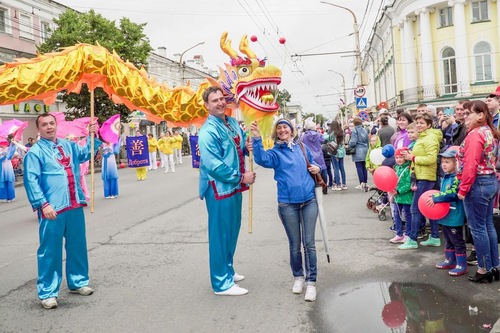 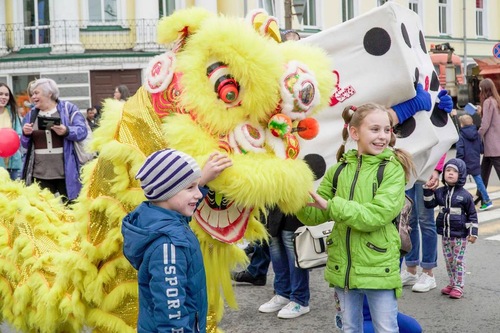 When the parade reached its destination, Susaninskaya Square, each group gave a presentation before a panel of judges. 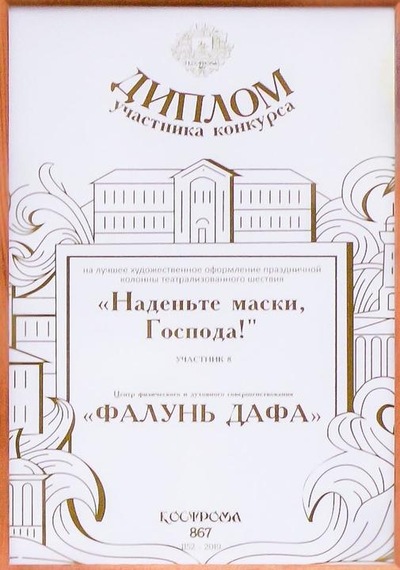 After the presentation, the governor of the district welcomed the festival attendees and announced the winners of the competition. Falun Dafa practitioners won first place, and the most artistic procession. 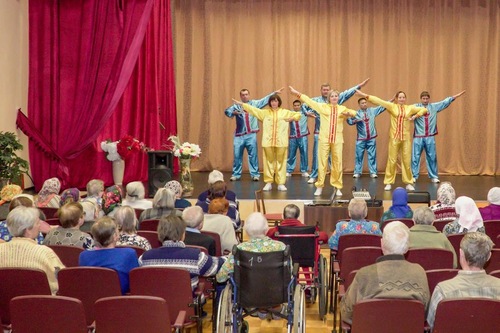 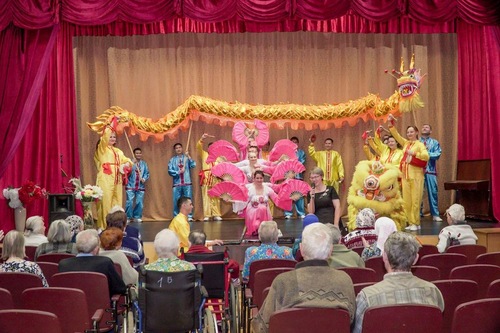 Performing on the stage at the Kostroma senior citizen center

During the afternoon of the event, the practitioners introduced Falun Dafa to the people at the Senior Center in Kostroma. They presented a demonstration of the exercises, an introduction on the background of the practice, and a Chinese cultural performance. 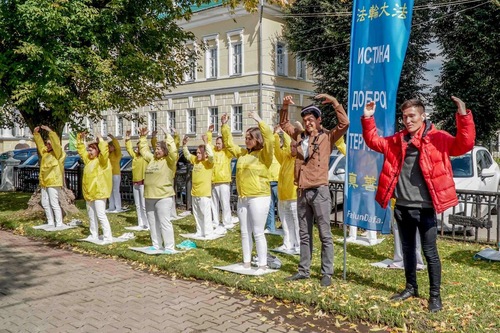 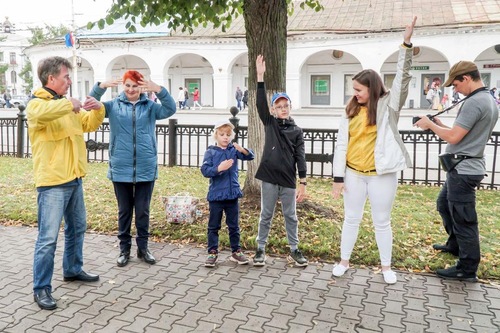 Demonstrating the exercises in Botnikovsky garden, located across from city hall. Spectators learned Falun Dafa from the practitioners

On the second day of the event, Falun Dafa practitioners demonstrated the exercises in the Botnikovsky central garden, located across from city hall. Many people watched the demonstration.

During the demonstration a practitioner spoke to the audience about Falun Dafa, the recognition and awards presented to Falun Dafa worldwide, and the Chinese Communist Party’s (CCP) brutal persecution that was launched in 1999.

Many people who saw the parade the day before became interested in Falun Dafa. The practitioners offered free instruction of the exercises to the spectators.

Ludmila from Poland had planned to go to the market, but decided to watch the demonstration upon hearing the music. She asked if she could learn the movements.

She said she felt calm after learning the exercises and experienced a very good feeling. She asked for contact information of the practice sites in Kostroma and Poland. She said that she felt a strong energy field, and that the practitioners seemed to illuminate this cloudy day. 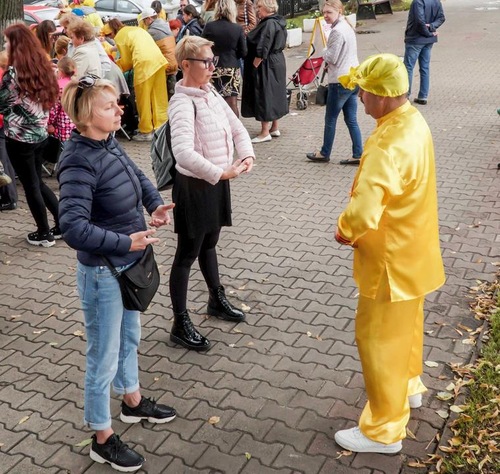 Svetlana from Kostroma and Ivetta from Cyprus learn Falun Dafa

Svetlana from Kostroma and Ivetta from Cyprus said that they felt a difference when learning Falun Dafa exercises. Svetlana said, “I have a feeling of warmth. I feel very comfortable!”

Ivetta said, “I have a new feeling and have not fully understood it yet. I specially like to be completely free from the city noise. Oh, this is great! I closed my eyes while practicing the sitting meditation, and all distracting thoughts disappeared.” 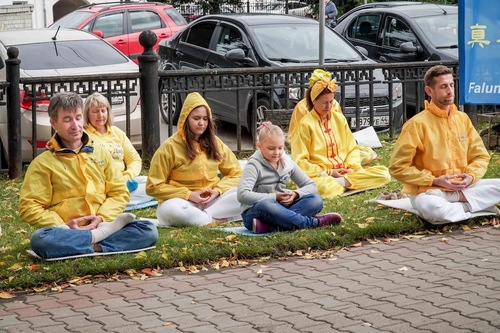 The young girl said, “I feel great! I feel that I am removed from the pressure from my parents.” 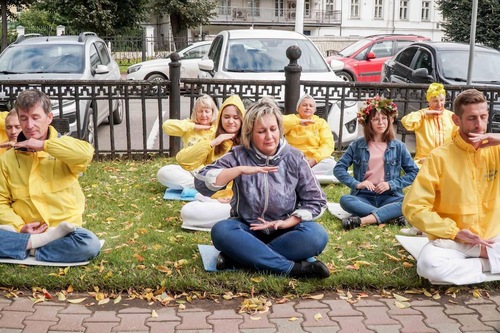 Olga from Murmansk was surprised that her hands became warm from the energy while learning the exercises. She said, “For me, this is very unexpected. Of course, this is good!” 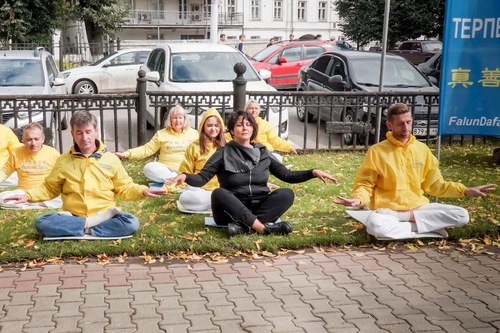 Svetlana from Moscow said that she saw a beautiful scene when she practiced, “I saw grasslands, mountains, a flowing river, and all was serene. I was very comfortable in that moment.”

Folding Paper Lotus Flowers, Learning about the Persecution in China 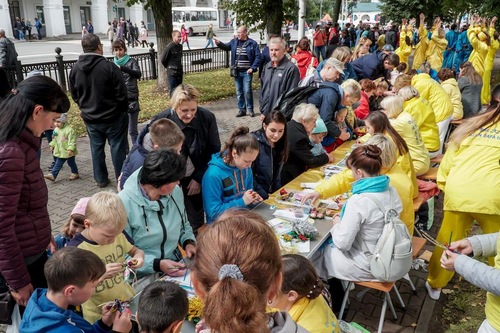 Ten tables were set up next to the event venue to teach people how to make small folded paper lotus flowers, a symbol of purity and resilience in the face of adversity, much like the Falun Dafa practitioners suffering persecution in China.

The practitioners explained how brutally the communist regime persecutes Falun Dafa practitioners, and even harvests organs from imprisoned practitioners on mass scale for sale to transplant patients.

Many people expressed sympathy for Falun Dafa practitioners in China. Some asked why the media did not report more on these crimes against humanity. They said they hoped more people would learn about this and that the persecution would soon come to an end.

“Master Is Always at Our Side”