(Minghui.org) Falun Gong practitioners were invited to participate in the 2nd annual Nebraska Asian Festival at the Riverfront in Omaha on July 27, 2019. Practitioners demonstrated the five Falun Gong exercises, introduced the benefits of the practice, and collected signatures on a petition calling for an end to the Chinese Communist Party's (CCP) forced harvesting of organs from living Falun Gong practitioners. 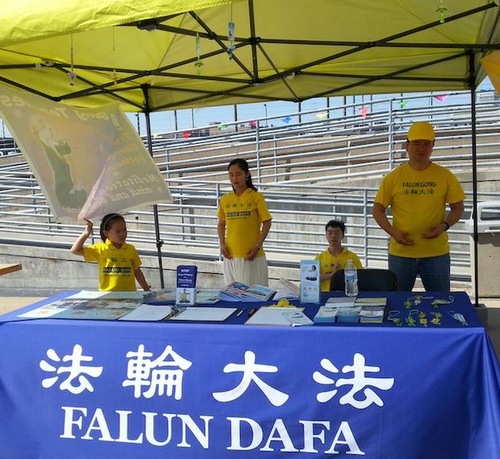 Practitioners demonstrate the Falun Gong exercises at their booth.

The Falun Gong booth was located close to the entrance of the festival and a continuous stream of people stopped by. They said they were fascinated by the beautiful exercises and the principles of Truthfulness-Compassion-Forbearance.

Michel, a reporter from omahanebraska.com, told practitioners, “I know your story. You are beautiful people.” She took pictures of the Falun Gong booth and the exercise demonstration. She also left her contact information so she could be notified about upcoming Falun Gong activities.

Glen, a local resident, said he was very interested in self-cultivation. He listened to practitioners briefly explain Falun Gong and then signed the petition. He started to learn the Falun Gong exercises at the event and said he planned to join one of the local outdoor group exercise sessions.

Many people said that they wanted to help stop the crime of forced organ harvesting. Mr. Nguyen from Vietnam was appalled to hear about the CCP's persecution of Falun Gong practitioners and signed the petition right away.

Mr. and Mrs. Howard, who live in a nearby town, signed the petition and brought their friends over to sign it as well.

Mr. James, a Brazilian Jiu-Jitsu coach, signed the petition and asked if he could make a donation. Practitioners told him they didn't accept donations. Mr. James took some copies of the introductory materials to help spread the word.

A young Chinese woman who read the Falun Gong display said that she had lived outside of China for many years but had heard about Falun Gong and the persecution. One of the practitioners, Ms. Wang, spoke with her and gave her a paper lotus flower. The woman was grateful and wanted to take some introductory materials to her parents.

As a Chinese man and his mother passed the booth, a Falun Gong practitioner named Mr. Wu asked them if they had heard about quitting the communist organizations. The mother looked afraid at first, but Mr. Wu reassured her, saying, “Don't worry, Ma'am. What we are doing is for your benefit.” He explained that the CCP was doomed because of the many crimes it has committed against the Chinese people, including forced organ harvesting. He told them that quitting the communist organizations voids the vows people have made to devote themselves to the cause of communism.

After hearing the explanation, the man said, “We are disgusted by the CCP's corruption. I will quit.” He had joined the Young Pioneers as a child. His mother hadn't joined any of the communist organizations but was very supportive of her son's decision to quit and kept saying, “Great!” They also took truth clarification brochures and started reading the information as they walked away.