(Minghui.org) Many cities across the United States have parades to celebrate Independence Day, and Falun Gong practitioners are often invited to participate. Ann Arbor, Michigan, and Columbus, Ohio, are two examples.

The Falun Dafa Association in Michigan was again invited to participate in the Independence Day parade in Ann Arbor. The Falun Gong procession included a Tang drum team, a float, and an exercise demonstration. Many spectators praised the practitioners' procession and applauded with enthusiasm as they passed by. 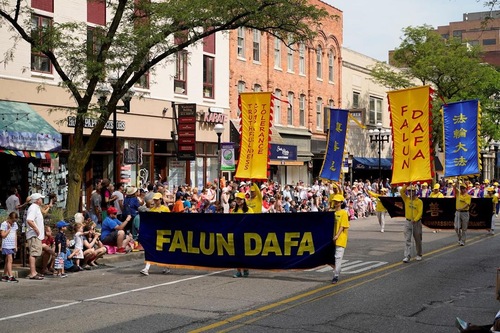 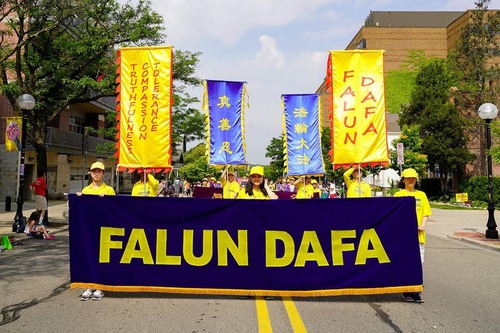 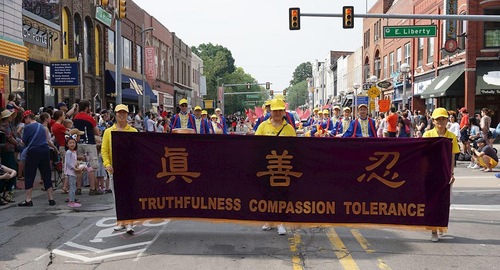 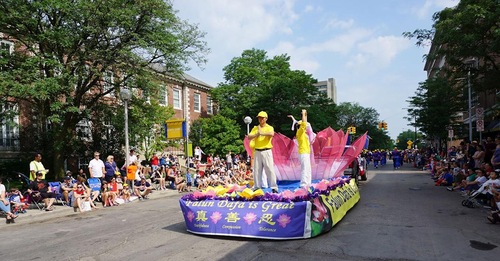 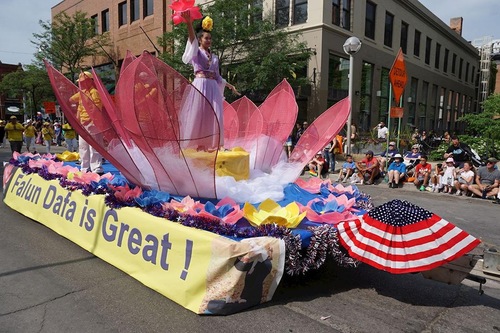 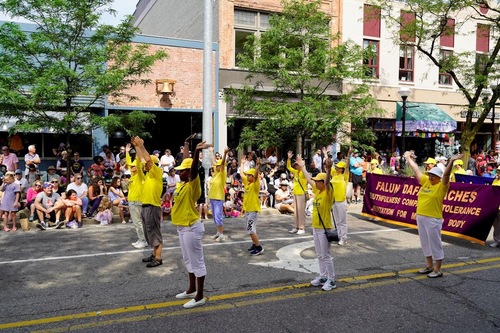 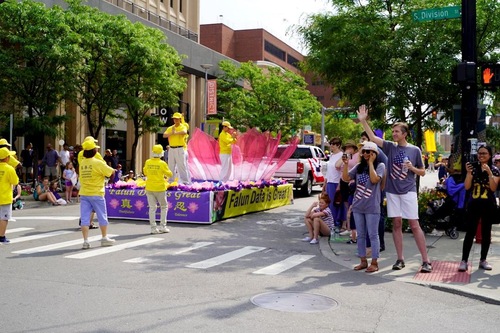 Spectators wave to the practitioners. 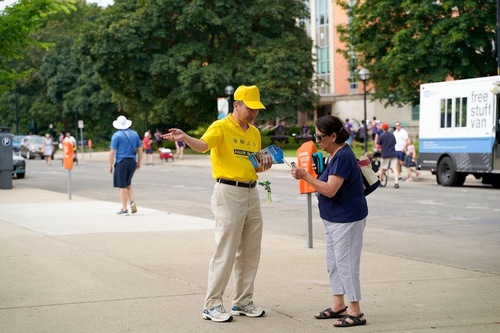 A practitioner distributes a flyer to a passerby before the parade.

Lucy, who is originally from China, has been in America for more than 20 years. As she and her daughter Jade watched the parade, she said she had seen Falun Gong on television. “The Falun Gong float is great,” she said. “I really like it.”

Her daughter Jade is a high school student. Jade was happy to see several of her friends in the parade. “The Falun Gong float and the fairy lady on it are beautiful,” she said. “I like them very much. I also like the words Truthfulness-Compassion-Forbearance on the banners. I think they are great.” 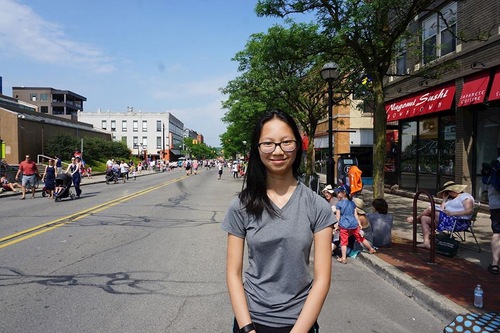 Jade, a high school student, at the Independence Day parade in Ann Arbor

Jessica Buna is from Saline, a town south of Ann Arbor. She works at the University of Michigan. This was the second time she had seen Falun Gong in a parade and she appreciated the practitioners' efforts. “I saw them in the parade last year and really liked them. I see they are here again this year. They have a beautiful float. Such nice colors,” she said.

Jessica said she liked the procession’s theme of Truthfulness-Compassion-Forbearance, because it is such a great message. 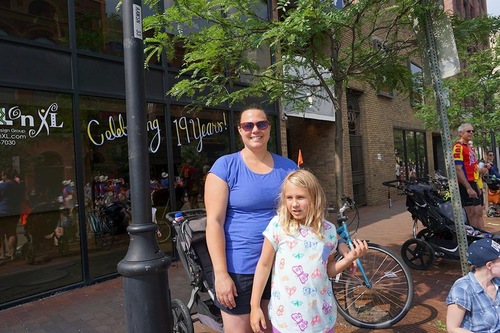 Beth Patton said she enjoyed the Falun Gong procession. “They are great. Their drum performance was powerful,” she said.

“We all need to learn Truthfulness-Compassion-Forbearance. I hope to see the Falun Gong procession in the parade next year,” Beth said. 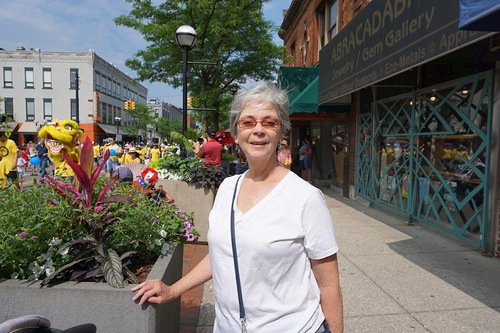 “This is our 29th year. We invited different groups to participate. This parade is really great and represents the entire Ann Arbor community celebrating Independence Day together.” 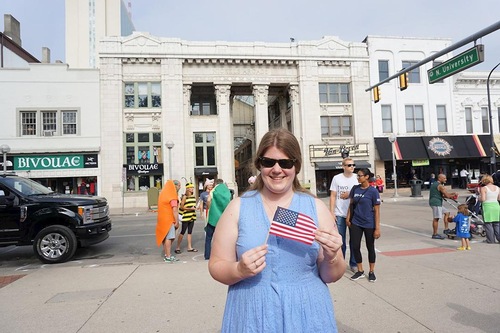 Carena said she remembered the Falun Dafa procession from last year, “They had a float and fairy ladies last year. They were beautiful. I remember vividly how colorful they were. We appreciate their participation in this parade.”

Falun Gong Welcomed in the Parade in Columbus, Ohio 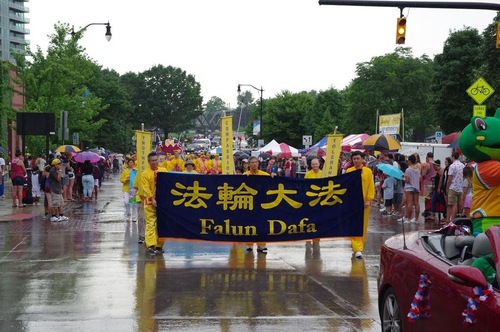 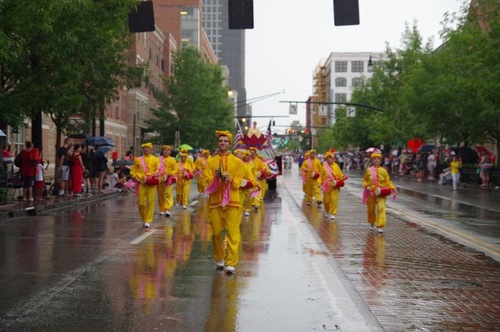 It was drizzling as spectators lined up for the evening parade, but that did not dampen their enthusiasm. 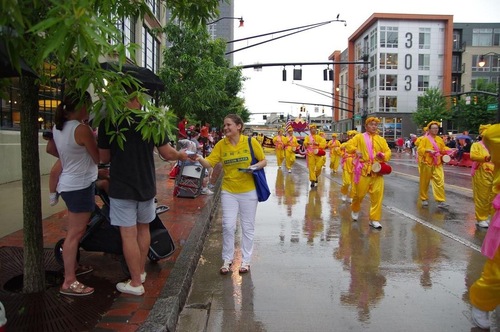 The Falun Gong procession included a float and a waist drum team. Two practitioners demonstrated the Falun Gong exercises on the float.

As the Falun Gong procession passed by, spectators accepted flyers from practitioners. Many spectators waved enthusiastically and applauded. Some spectators sought out practitioners after the parade and said they liked the waist drum performance.

“Three Guangdong Residents Sentenced to Prison for Their Faith”