(Minghui.org) The 2019 Quebec Falun Dafa Experience-Sharing Conference took place at Centre Greene on Saturday, June 29, 2019. Eight practitioners talked about how they have applied the principles of Truthfulness-Compassion-Forbearance and how it changed their behavior and thoughts in their daily lives. 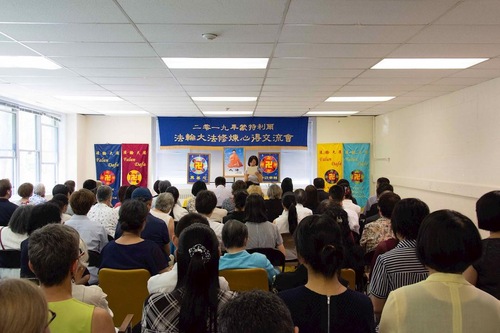 Ms. Qi began to learn to practice Falun Dafa as a child because of her mother. She currently works as a graphic designer and said that producing artwork is one way that she can let people know about the goodness of Falun Dafa. During the process of creating art, she has witnessed how her skills have improved after she lets go of attachments.

Ms. Qi used to often compare her work with the artwork found on social media. As a result, she sometimes felt conceited or other times felt sad and lacking in self-esteem. She knew that she had a desire to surpass others, but did not know how to let go of it. One day while studying the Fa teachings, she realized that her artistic skills were given to her by Master Li (the founder of Falun Dafa) for her to validate the Fa. She should not use these skills to pursue reputation and personal gain or use them to compete with everyday people.

As she gradually let go of jealousy and attachments to fame and material gain, she found that her heart broadened and her skills improved. “I have now understood that the artwork we produce is just like us. To produce good products, I have to first be a good person. That includes getting rid of jealousy, a competitive mentality, as well as the attachments to fame and material gain.”

Faith in Dafa and No Negative Thoughts

Western practitioner Katherine was one of the coordinators for the Falun Dafa Day celebrations this year. During this process, she was bothered by anxiety and other negative thoughts. Through Fa-study, she was able to negate those thoughts and in the end, the event went on successfully.

“From this I learned that the negative thoughts arose because I tended to rely on just myself to find the answers. While working with other practitioners, I usually did not trust them,” she said. Katherine said this happened because she did not fully believe in Master and Dafa. That is, she was too attached to herself. After recognizing these issues, she became determined to clear out those human notions.

Letting Go of Oneself When Promoting Shen Yun

Ms. Liu, a young practitioner, said that she sometimes travels to other cities or countries to promote Shen Yun Performing Arts. This has given her opportunities to pay attention to detail and become more selfless.

She shared an apartment with several other practitioners who often came to help with Shen Yun promotion. There were some conflicts, which made it quite challenging for her since she was used to doing things her own way. The conflicts occasionally became intense, making her wonder whether she should rent a hotel room by herself.

She also knew that she and the other practitioners who came to help were one body. The barriers between them, and whether they could all let go of self to work together well, could affect the ticket sales. She told herself that she had to overcome these tests, instead of dodging them.

While promoting Shen Yun, she was also bothered by the grades she received for her schoolwork and suffered some physical discomfort. As she overcame all of these issues, practitioners also did well in helping each other, and the tickets in several cities sold out.

Ms. Wei has practiced Falun Dafa for more than 20 years. She knows that many Chinese people were misled by the defamatory propaganda from the Chinese Communist Party (CCP), so she often makes phone calls to China to clarify the truth about Dafa. After she told people how the CCP has been harming innocent people, including persecuting Falun Dafa, some Chinese people decided to quit the CCP organizations.

Making phone calls to China to ask people to quit the CCP organizations was not always easy for her. Ms. Wei was easily affected by the people who answered the phone in the beginning, and she sometimes was upset by the negative things they said. Instead of complaining that it was too hard to awaken people to the truth, she spent more time studying the Fa and came to understand that compassion comes from solid cultivation.

Ms. Wei became more patient and was able to deal with issues with compassion. Even when people threatened her or swore at her, she was not disturbed. Rather, she focused on letting go of her attachments and changing herself according to the Fa. As she made progress through improving herself, she found that people also changed, as if they had been waiting to be awakened.

Ms. Sun became a practitioner in 2011. She talked about how she applied the Dafa principles to rectify her behavior and thoughts while caring for her children.

Her son was graduating from elementary school and was getting ready to head to middle school. Many parents were considering sending their children to private schools, and she also became anxious. Her son often made mistakes when doing math and this made her very upset. She looked inward and found that it was because she expected her son to study well, go to a good college, and have a stable income. Realizing that these were attachments that were mingled with vanity, she tried to let go of them and rectify herself according to the Fa.

Ms. Sun also found that she often became angry when her children could not calm down to study the Fa. She looked within and realized that her hidden thoughts were that her children could become smarter and get better grades through Fa-study. As she got rid of such impure thoughts, her children's Fa-study also improved.

“Falun Gong Practitioners in Critical Condition After Being Tortured at Liaoning Women's Prison, One Dies After Being Bedridden for Five Years (Graphic Photo)”