(Minghui.org) Falun Gong practitioners from Italy held activities in Rome on July 20, 2019, to inform people of the ongoing 20-year-long persecution in China. They also held an Experience Sharing Conference on July 21, 2019.

July 20 marks the 20th anniversary of Falun Gong's peaceful resistance to the Chinese Communist Party's (CCP) persecution. Practitioners unfurled large banners and set up informational displays on the Piazza Venezia and the Piazza Vittorio Emanuele to introduce the ancient spiritual practice and to tell people about the persecution.

Piazza Vittorio Emanuele is located at the center of Rome's Chinatown. Many Chinese stopped to learn about Falun Gong and expressed their support. Some showed great interest in this beneficial self-cultivation practice and planned to learn it at a group exercise site. 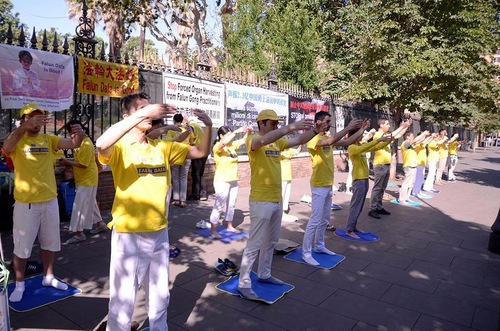 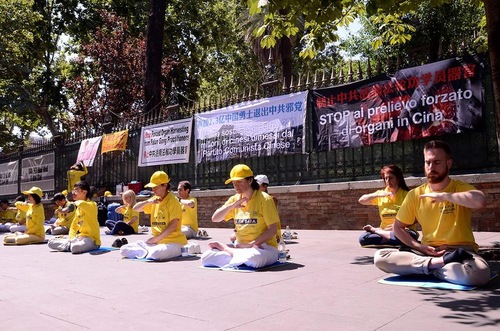 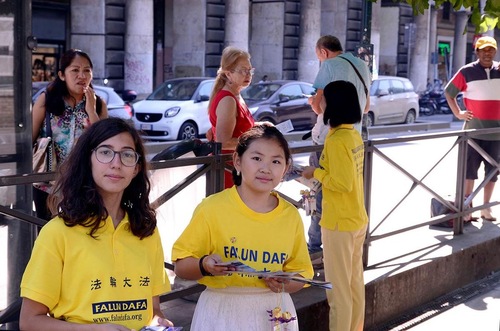 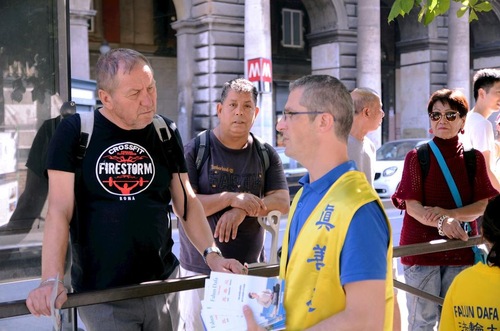 Practitioners do the exercises and clarify the truth in Rome's Chinatown on July 20, 2019.

A woman from the Netherlands was fascinated by the Falun Gong exercises and joined practitioners to learn them. After she did the exercises for an hour and a half, she said she felt great. She said she planned to look for a group exercise site when she returned home.

Practitioners held the same activities at Piazza Venezia that afternoon and evening. Piazza Venezia is a must-see tourist site in Rome. A continuous stream of people stopped by their display and asked about Falun Gong. Practitioners gave them an introduction and told them about the CCP's atrocities of harvesting organs from living practitioners. Many people took photos and read their display boards. Some Chinese took this opportunity to learn the truth about Falun Gong and quit the Communist organizations they had once joined. 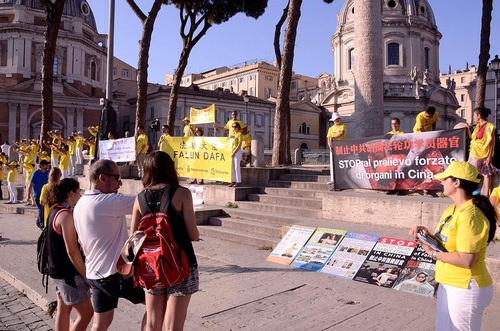 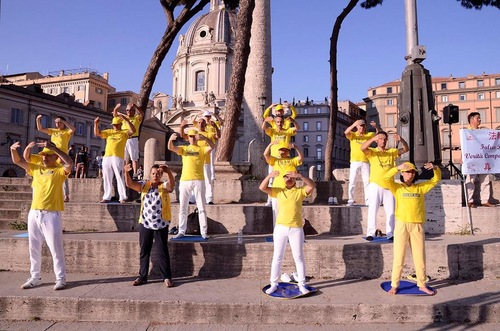 Practitioners demonstrate the exercises and tell people about the persecution at the Piazza Venezia. 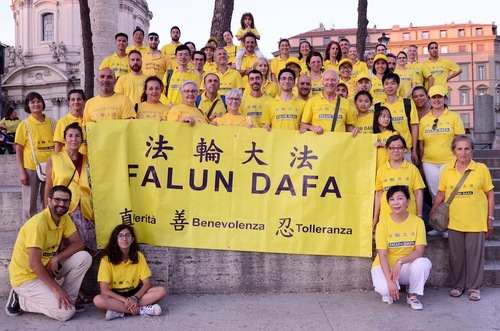 Practitioners are happy to share the benefits of Falun Gong.

The 2019 Falun Dafa Experience Sharing Conference in Italy was held in Rome on July 21. Eleven practitioners talked about how they cultivated their xinxing, validated the Fa, and clarified the truth to people. 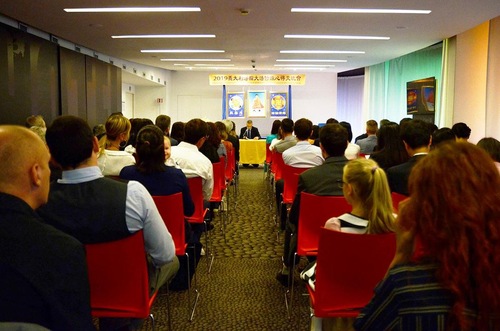 Raffer, a computer engineer, shared his experience during the Shen Yun performances in Rome. Raffer was kept busy driving practitioners to the theater, hotels, and minding the bus parking lot until 3 a.m. “I was exhausted. After I drove the last practitioner to his hotel, I felt I couldn't drive anymore. Every time I stopped at a red light, I fell asleep for a few seconds and then woke up. I was extremely tired by the time I got home. After sending forth righteous thoughts at 6 a.m., I headed out to drive a technical director and I still had to prepare badges and direction signs. I really didn't know what to do.

“Then a thought flashed in my mind: 'This is a way to improve and eliminate my karma. I normally wouldn't have been been able to do all these things. It's a rare opportunity.' At that moment, I felt a warm flow of energy going through me and I felt I was being lifted by Master's profound compassion. My mind became clear. I was filled with energy and happiness from the bottom of my heart. That righteous thought completely turned things around. I no longer felt tired. Instead, I felt as if I’d had a good, long sleep.” 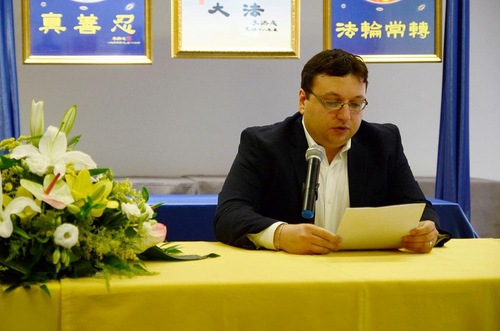 Raffer talks about his realizations while helping with Shen Yun when it came to Italy.

Paola from Florence used to have health problems. Her doctors treated her with hormones and told her she wouldn't be able to have children. She started cultivating Falun Dafa and met with a happy surprise after she started following the principles of Dafa and eliminating her attachments: she stopped the hormone treatments and had a baby.

Paola said, “I recently gained a deeper and deeper understanding of coordination between practitioners. My understanding is that our mission is formidable and can't be accomplished by a few people, not because of the number of things we need to do, but because we need to cooperate and help each other. I think what awaits us is like a sailing a ship in stormy seas. We are sailors with different roles. Every role is critical to ensure the ship makes it to shore.” 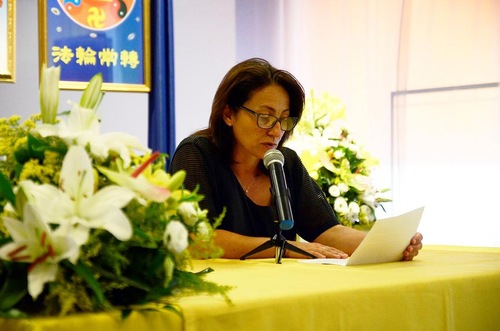 Paola from Florence was told she could never have children. After she began practicing Falun Gong, she had a baby.

Those who attended the conference said they benefited from their fellow practitioners' experiences, which they felt were precious. They learned how others had improved their xinxing through overcoming tribulations, put cultivators' understanding of the Fa into practice in their daily lives, and validated the Fa with righteous thoughts and actions. They realized that, as Dafa disciples during the Fa-rectification period, solid cultivation is the only way to fulfill their mission of offering salvation to people.

“Once Imprisoned for 13 Years, Liaoning Man Faces Further Prosecution for His Faith”

“Improving Quickly in My Cultivation While Promoting Shen Yun”