(Minghui.org) Falun Dafa practitioners and supporters gathered at the Customs House in Sydney's central business district on July 19, 2019, to hold a rally condemning the Chinese Communist Party's persecution of Falun Dafa, and to call for an end to the atrocities.

Falun Dafa is a mind-body practice based on the principles of Truthfulness-Compassion-Forbearance. Twenty years ago, on July 20, 1999, the then-head of the CCP regime Jiang Zemin launched the brutal persecution campaign against practitioners which continues to this day. 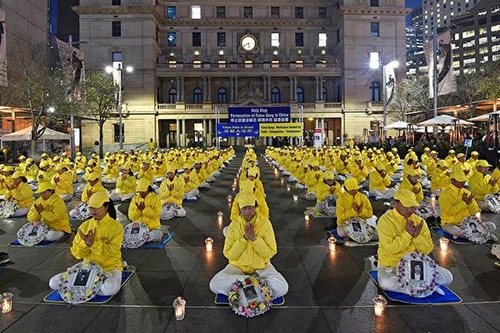 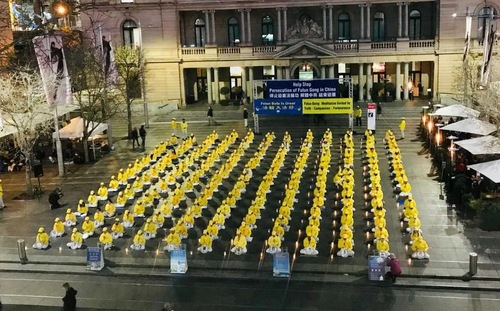 Practitioners hold a candlelight vigil outside Customs House in Sydney on July 19, 2019, marking 20 years of persecution in China.

President of the Australia Falun Dafa Association: This 20-Year-Long Persecution Must End Now 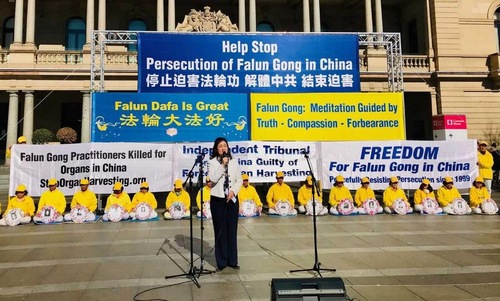 Dr. Lucy Zhao, president of the Australia Falun Dafa Association speaks at the rally on July 19, 2019.

Dr. Lucy Zhao, president of the Australia Falun Dafa Association, was the first speaker at the rally.

She said, “Twenty years ago on this day, the CCP began its persecution of Falun Gong. Tens of thousands of practitioners have been illegally detained, tortured, and killed, countless families have been broken up. What's even more shocking is that the organs of Falun Gong practitioners and other prisoners of conscience are being taken and sold for profit. This 20-year-long brutality must be stopped now.”

Dr. Zhao noted that Falun Gong practitioners are not the only victims of these unprecedented human rights violations, several billion Chinese citizens have been deceived by the Chinese regime's propaganda, and the consciences of people everywhere as well as governments globally are being challenged. Everyone has only one of two choices to make: stand up and speak out, or choose to remain silent.

She concluded her speech by asking people to stop and learn the truth, spread the word among family and friends, and help the innocent who are stripped of their basic human rights in China. She said that doing so also helps create a better place for our future generations to live.

Federal Official: Support Falun Gong and China Will be Stronger and Better for It 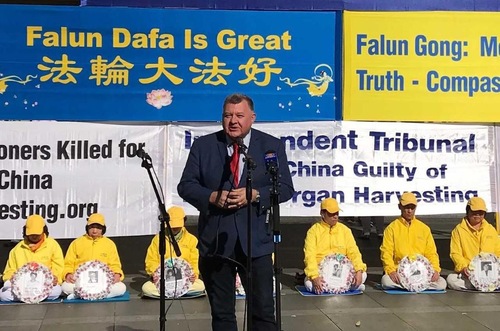 Craig Kelly, a member of the Australian House of Representatives, speaks at the rally.

Craig Kelly, member of the Australian House of Representatives, began his speech by telling spectators that he was pleased to attend the rally as an elected official in Australia's federal government. He noted, “To say whatever is on our conscience without interference, that is something our country must always remember.”

He recalled a business trip to China that he went on before he was elected, where he stayed in a hotel that displayed a brochure that said, “Falun Gong is bad.” However his thoughts were, “If a communist regime prints a brochure telling you one thing, normally you can guarantee the opposite is true. And that is what I have discovered with Falun Gong.”

Mr. Kelly concluded his speech with a message for the Chinese regime: “If China can allow Falun Gong freedom of speech, and the right of assembly without persecution, then the Chinese nation can only be stronger and better for it, and so the rest of the world.” 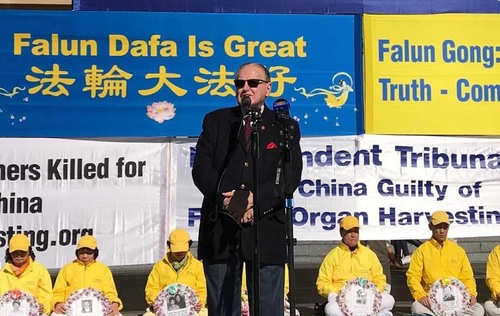 Reverend Fred Nile, a member of the New South Wales Legislative Council and leader of the Christian Democratic Party, spoke at the rally.

Reverend Fred Nile, a member of the New South Wales Legislative Council, said in his speech, “Falun Gong [practitioners] do not break the law and should not be imprisoned. Falun Gong should be allowed freedom to practice their cultural activities, which are all very healthy, and meditation guided by truth, compassion, forbearance. They have always been the traditions of ancient China. Modern China has to restore those principles today.”

He ended his address by calling on the Chinese leader and members of the regime to provide genuine freedom for all groups in China, especially Falun Gong. 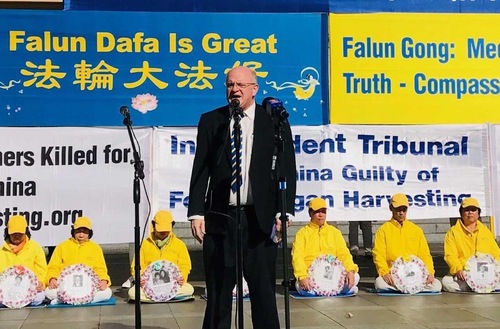 Andrew Wilson, the Parramatta City mayor, gives a speech at the rally.

In his speech, Andrew Wilson, the mayor of Parramatta City, mentioned the recent findings of the China Tribunal on organ trafficking that was held in London, and emphasized that the evidence is overwhelming. He closed his address by saying, “I am very proud to stand here today, and if there is any way to help, I will.”

Medical Professor: We Need to Act Together to Try and Stop These Horrendous Crimes 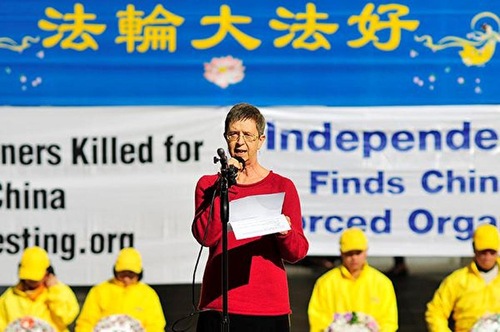 In her speech, Wendy Rogers, professor of Clinical Ethics at Macquarie University in Sydney, and chair of the International Advisory Committee of the International Coalition to End Transplant Abuse in China (ETAC), noted how the Chinese Communist Party’s campaign against Falun Gong had evolved from imprisonment, torture, and brainwashing, into using imprisoned practitioners as a valuable source of organs that have fueled China’s rapidly rising transplantation rates since the year 2000.

She explained how the world first learned that imprisoned Falun Gong practitioners were being killed for their organs in 2006, and frustrated with the constant denials of forced organ harvesting in China over many years, ETAC sought advice from an international human rights lawyer, Sir Geoffrey Nice QC.

Professor Rogers said that Sir Geoffrey had recommended holding a People’s Tribunal to examine all of the evidence and form a legal opinion as to whether any crimes, and if so what crimes, may have been committed regarding forced organ harvesting from prisoners of conscience in China.

She also noted that while People’s Tribunals may not have legal standing, they can investigate events that governments do not or will not investigate; they can take evidence which also gives a voice to victims, and they can make judgments which may result in legal or other actions by relevant bodies.

The China Tribunal was formed in early 2018, and in her address, Professor Rogers highlighted the results in the final judgment in June 2019:

– “Forced organ harvesting has been committed for years throughout China on a significant scale, and that Falun Gong practitioners have been probably the main source of organ supply”

–“Falun Gong and Uyghurs are the victims of Crimes Against Humanity”

At the end of her speech, Professor Rogers implored everyone to act together to try and stop these horrendous crimes, including putting an immediate stop to all transplant-related collaboration with China by all Australian universities and hospitals, lobbying the Australian government to introduce legislation to ban transplant tourism, and publicly condemning forced organ harvesting in China.

Support from Those in the Legal Profession 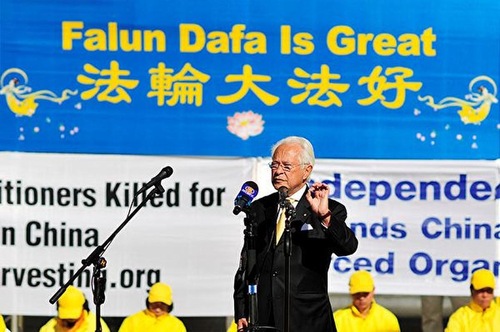 Professor David Flint AM is the former chairman of the Australian Broadcasting Authority (1997-2004). He is an emeritus professor of law at the University of Technology in Sydney and was recognized with the award of World Outstanding Legal Scholar from the World Jurists Association in 1991.

In his speech, Professor Flint reiterated several times, “The only thing necessary for the triumph of evil is for good men to do nothing.”

He made references to the recent China Tribunal findings about forced organ harvesting in China. He said that the Tribunal “found beyond reasonable doubt that the [Chinese] regime is involved in this wickedness,” and that “any company or government dealing with the PRC should bear in mind the fact that they are dealing with a criminal state.”

He also referred to a historical precedent, when during World War II much of the American media kept quiet about the terrible things happening to the Jews.

He added, “Today, western governments around the world are keeping quiet about this terrible trade in organ harvesting. It must stop - no matter what the cost! The fact we may lose trade, lose foreign students – so what. It is important that the government of Australia takes this aboard, as the Trump government in America is going to do to take every measure to stop this utmost wickedness.” 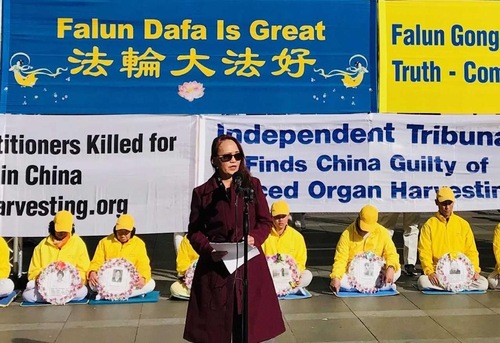 She listed the many crimes that the CCP has committed against its citizens as well as foreign nationals since its usurping of power. She asked everyone to stand together to speak out against these injustices. She appealed to the Australian government to come up with a legislation similar to the Global Magnitsky Sanctions and punish individuals as well as businesses involved in acts violating human rights. She also asked the government to pass laws stopping Australian citizens from going to China for organ transplants. 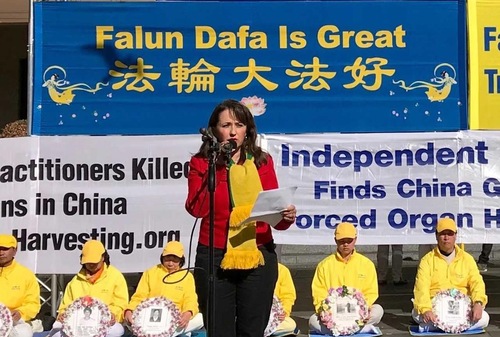 Australian lawyer, university lecturer, and writer Sophie York praised Falun Gong practitioners for fighting for freedom of belief and conscience, as well as promoting traditional values. She expressed her admiration for practitioners' courage in exposing organ trafficking and emphasized that people are born with basic human rights. No government or organization can take this away.