Hong Kong: Falun Gong Rally and Parade Calls for Bringing the Culprits of the Persecution to Justice

(Minghui.org) Falun Gong practitioners in Hong Kong held a rally and march on Sunday, July 21, 2019, to call on the international community to help end the persecution of Falun Gong and bring the culprits to justice.

Politicians, human rights lawyers, and activists came to show their support for practitioners’ perseverance and peaceful efforts over the years to try to end the persecution.

It’s been 20 years since former Chinese leader Jiang Zemin and his regime launched the persecution of Falun Gong, a mind and body improvement system based on the principles of Truthfulness-Compassion-Forbearance. Countless practitioners are still incarcerated and being tortured in China for not giving up their faith, and many have been killed when their organs were removed against their will for sale to organ transplant recipients.

The Tian Guo Marching Band gave a performance the morning before the rally, and practitioners demonstrated the exercises at Edinburgh Place. 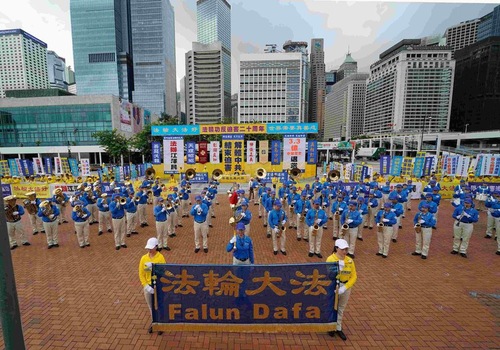 The Tian Guo Marching Band performed before the rally. 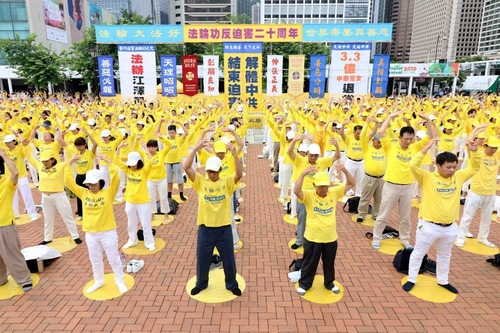 Video of rally and parade

Mobilize Everyone to Stop Organ Harvesting 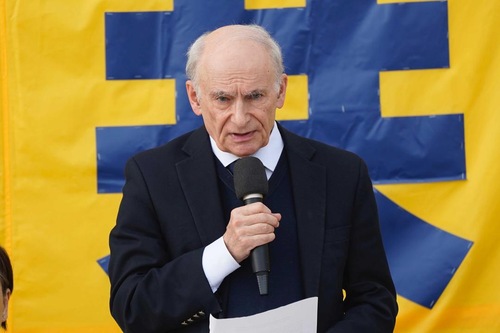 Canadian human rights lawyer David Matas traveled to Hong Kong to show his support for the practitioners’ efforts. He said he admired their determination and courage in their efforts to end the persecution. He also condemned the Chinese Communist Party (CCP) for launching the nationwide state-sanctioned organ harvesting from unwilling Falun Gong practitioners who had been incarcerated for their faith.

After many practitioners were killed for their organs, countries and organizations around the world established laws and ethical guidelines to prevent such killings. Mr. Matas said that this special day of commemoration shouldn’t be just a time to revisit the pain and outrage, that people from all walks of life should take measures to repair the damage and prevent these things from happening in the future. He said that people should say to the culprits and accomplices, “This must stop” and “We will never forget what you have done.” 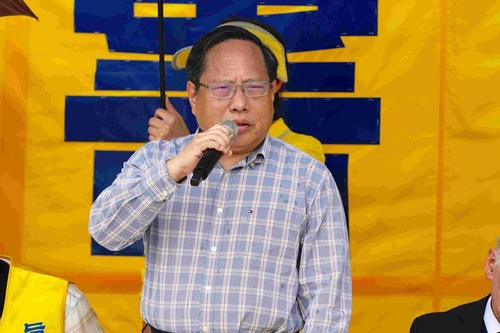 Albert Ho Chun-Yan, the current chairman of the Hong Kong Alliance in Support of Patriotic Democratic Movements in China, condemned the CCP for using vicious methods and peremptory policies to suppress religious groups and the people of conscience who help them. He mentioned attorney Gao Zhisheng, who became a high-profile target for the CCP’s suppression after he defended Falun Gong practitioners and wrote open letters to China's leadership about the issue. 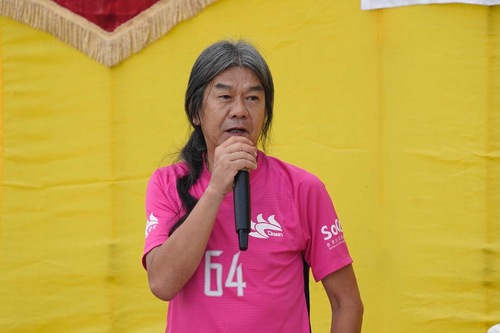 Leung Kwok-hung at the rally

Leung Kwok-hung, a former legislator, said that the CCP wants to eradicate both Falun Gong and Hong Kong’s culture. “The CCP wants to eliminate all the dissidents and everything that it cannot control, including faith and religions.” He thanked practitioners for upholding their righteous belief and raising awareness of the persecution over the past 20 years.

Calling on Everyone to Side with the Good

Kan Hung-Cheung, spokesperson for the Hong Kong Falun Dafa Association, said that the CCP is being criticized internationally and is detested by the people of China.

“A new world order has formed to end the persecution and respect righteous beliefs. In the near future, the communist system will fall, the persecution will end, and the universal principles will shine,” he said.

Mr. Kan urged other governments to intervene and help end the persecution of Falun Gong.

A Movement to Sue Those Guilty of Carrying Out the Persecution

Attorney Teresa Chu, spokesperson for the Falun Gong Human Rights Lawyers Working Group, said that Falun Gong practitioners around the world began suing former Chinese leader Jiang Zemin for his crimes against humanity in 2015. Over the past four years, 3.2 million people in 35 countries have filed criminal complaints against Jiang for the crimes he perpetrated.

“Only when the CCP falls can we end the catastrophe of the 20-year-long persecution and stop the CCP’s puppet regime from violating the rule-of-law and freedom in Hong Kong,” Ms. Chu said.

To Side with Falun Gong

Geng He, wife of the renowned human rights lawyer Gao Zhisheng, spoke through a recorded video.

She said that her husband began looking into the persecution of Falun Gong in 2005 and then wrote several open letters to the leadership in Beijing. He has since been arrested many times by Chinese authorities and has suffered unspeakable torture.

Ms. Geng said she was very moved by the practitioners’ determination to end the persecution through peaceful means. She also thanked them for tirelessly helping with the efforts to rescue her husband. “I am happy to side with Falun Gong practitioners,” she said.

Withdraw from the CCP

“I see more and more people support and join [practitioners]. We wish to see the continuance of such peaceful and rational measures,” he said.

He called on all of Hong Kong's residents and the international community to condemn the CCP’s crimes of harvesting organs from living Falun Gong practitioners until it stops.

Alan Leong Kah-kit, chairman of the Civic Party, demanded that the CCP “respect religious freedom and stop the persecution.”

He mentioned that U.S. Vice President Mike Pence has brought up the CCP’s violation of Falun Gong practitioners’ human rights many times. Mr. Leong urged the current Chinese leader to stop the persecution.

Speak Up Against Tyranny

Teng Biao, a Chinese human rights lawyer, stressed that people should not keep silent about the CCP’s persecution of Falun Gong.

“The persecution is still happening and the evildoers are still at large. Let’s shine a light on the truth if we don’t want to live in a world of lies and brutality,” he said.

Parade Shows the Truth about the Persecution 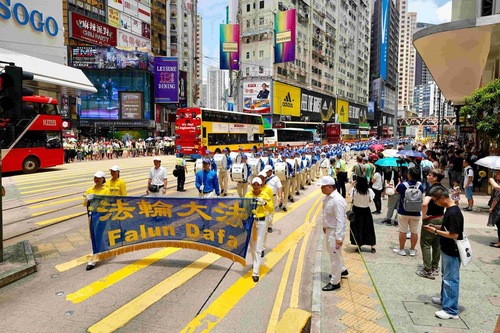 The parade attracts many spectators. 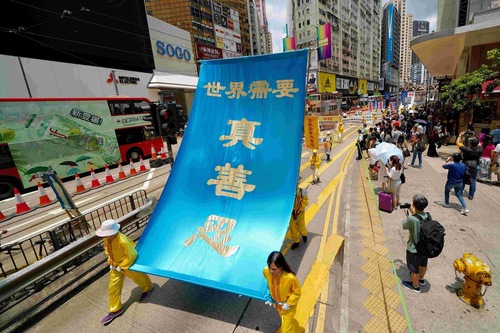 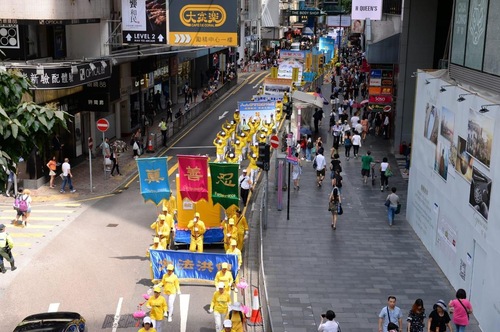 Promoting the benefits of Falun Gong 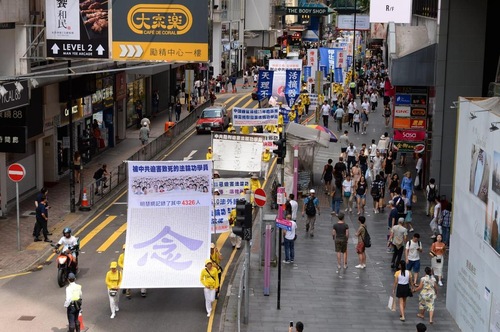 Practitioners mourn those who have died as a result of the persecution. 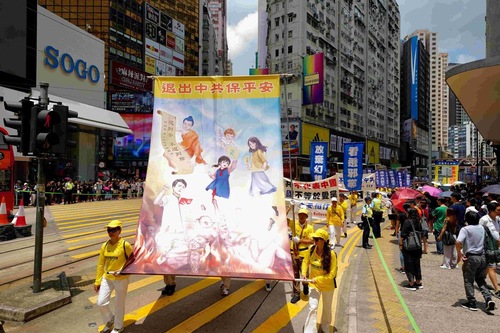 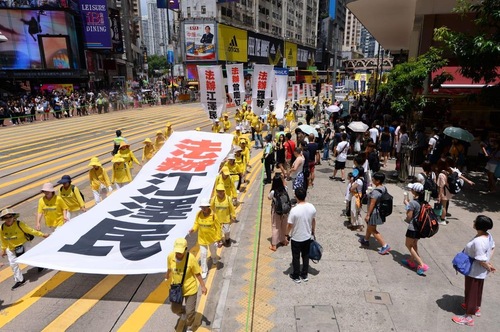 A call to bring those guilty of the persecution to justice 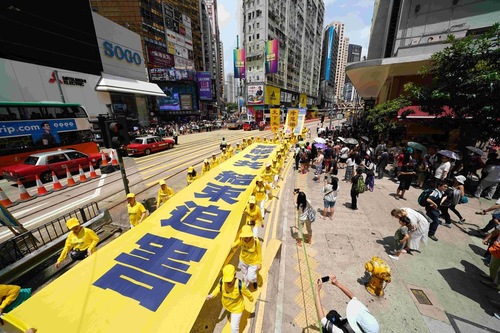 That afternoon, more than 1,000 practitioners participated in the parade, which left from King's Road Playground and wound through many of Hong Kong's busy districts before reaching the Liaison Office of the Central People's Government in the Hong Kong Administrative Region.

Many tourists and locals stopped to watch the parade pass by. Because of the information blockade in China, many Chinese tourists were glad to learn more about Falun Gong and to learn the truth about the persecution.

“Vancouver, Las Vegas, and Hawaii: Rallies and Candlelight Vigils Commemorate Those Who Have Died During 20 Years of Persecution”