(Minghui.org) Twenty years ago on July 20, 1999, the then Chinese dictator Jiang Zemin singlehandedly launched a nation-wide persecution campaign against practitioners of Falun Gong, a mind and body improvement practice that was brought to the public in China in 1992.

Since 1999, practitioners all over the world have been tirelessly telling people why the persecution is wrong and exposing the extent of cruelty involved in the persecution.

For the past two decades, the truth about Falun Gong has spread inside and outside of China and caught the attention of people of conscience everywhere. Every year around July 20th, practitioners around the world hold rallies, parades and candlelight vigils to raise the awareness of the atrocities in China and remember those who have died in the persecution for refusing to renounce their faith. 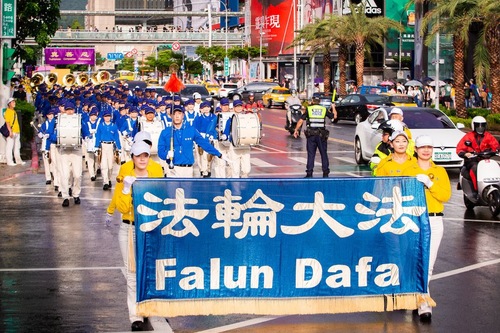 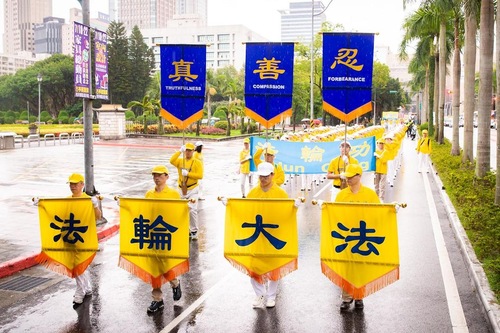 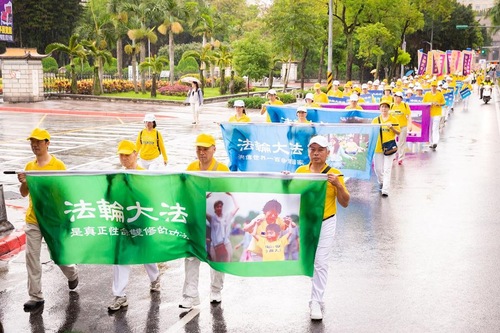 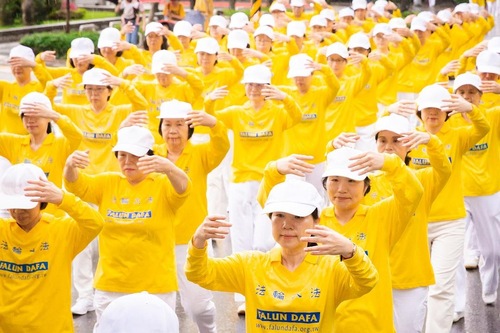 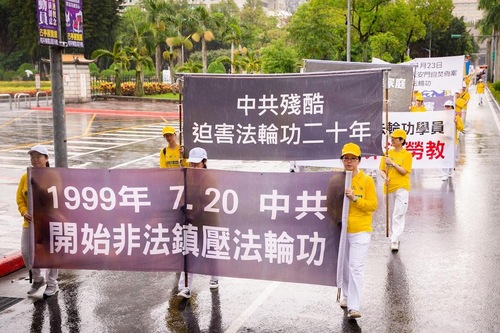 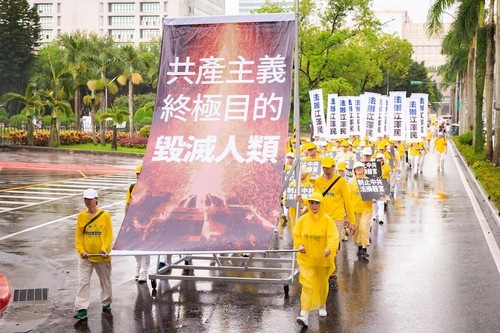 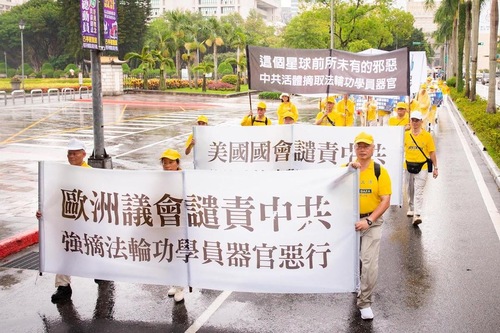 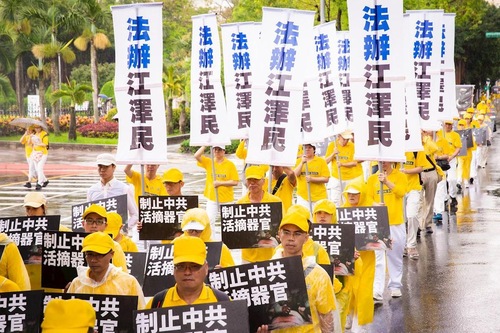 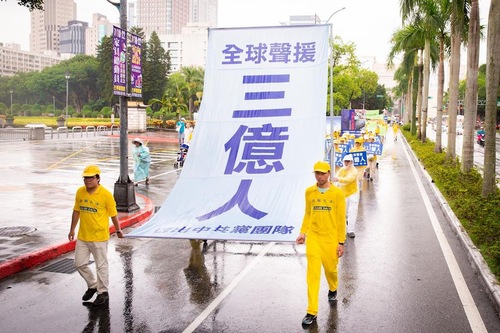 Lead by the Tianguo Band, 2,000 Falun Gong practitioners marched on the streets of Taipei on July 20, 2019 to raise the awareness of the persecution of the practice. They called on the Chinese communist regime to immediately stop the persecution and to bring the culprits of the crimes against humanity to justice. 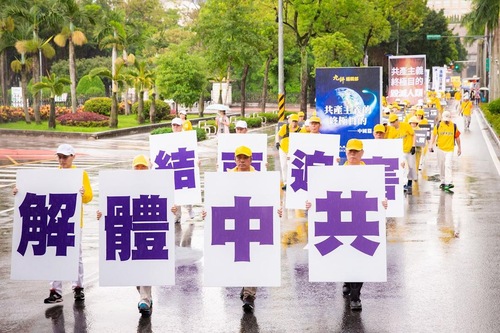 The march calls for an end to the persecution

This year 2,000 practitioners gathered in Taipei to prepare for the grand parade on the afternoon of July 20, 2019. Lead by the Tianguo Marching Band, their procession included a demonstration of the five exercises, the Waist Drum Team, the Flag Team, and Celestial Maidens. Many other practitioners held banners and posters with information promoting the health benefits of the practice, exposing the evil nature of the Chinese Communist Party (CCP), and calling to end the persecution and to bring Jiang Zemin and his accomplices to justice.

The parade started from the Taipei's City Hall Square and marched through the busy districts of the city.

After the procession returned to City Hall Square that evening, practitioners held a rally at 6:30 p.m. A candlelight vigil was held later that evening to remember those who had died bravely in the persecution for refusing to give up their faith, despite the brutal torture they faced. 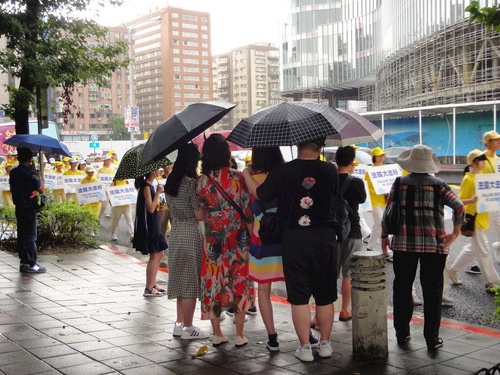 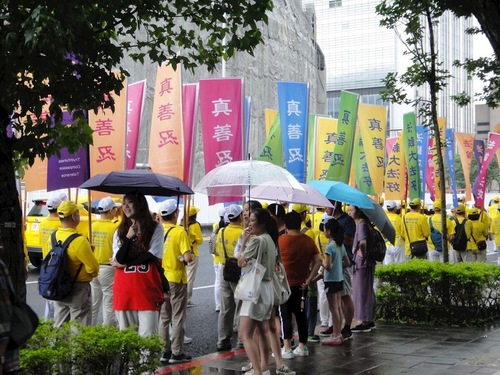 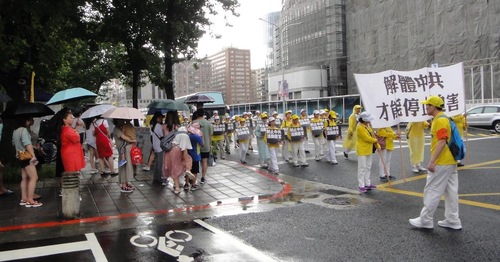 Tourists from China watch the grand parade by Falun Gong.

A man from China watched the parade attentively. When he heard spectators around him criticizing the evil nature of the CCP and the cruelty of the persecution, he distanced himself from the CCP.

“I was born and raised in China but I am nothing like the CCP. I can’t stand the CCP, just like many other Chinese. We can’t wait for it to collapse. Please try to differentiate us Chinese people from the CCP. The CCP doesn’t represent the people of China.”

Practitioners demonstrating the organ harvesting atrocities caught the eye of Mr. Zhang from Shanghai. During the persecution, the CCP has been systemically harvesting organs from unwilling practitioners that were incarcerated for not giving up their faith.

“It is terrible if it really happened,” Mr. Zhang said, adding that he would look more into it while he was in Taiwan, since “in China information is strictly blocked and many things are kept from the public.”

A mother and daughter from Beijing recorded the parade with their cell phones. The daughter said, “Parades have not been allowed in China since the 70s. The political science taught in school in China is all about following the CCP’s ideology.”

When the daughter saw the peaceful parade with police officers keeping order, she was surprised to learn that parades are allowed in Taiwan after proper procedures are followed.

The mother added that “belief is the most basic freedom born with every man.” When she learned how the CCP had staged the persecution and the self-immolation incident on Tiananmen Square to frame Falun Gong in 2001, she was shocked. She recorded the entire parade and said that she wanted to show people she knew how differently practitioners were treated in the two places.

Admirable Perseverance and Determination to Spread the Truth

Ms. Chen watched the parade with her younger sister. She has a friend who is a practitioner, so she knows about the practice and its principles.

“Practitioners are a group of good people who are not interested in politics. Unfortunately the CCP couldn’t see that and tried to eliminate the practice,” she said. “Falun Gong is the only group that the CCP set its mind to eliminate, but couldn’t do so for 20 years. Their perseverance and determination to tell the truth is admirable.”

Different Attitude Toward Falun Gong Outside of China

Mr. Zhang is an insurance agent in Taiwan and often travels overseas. He has seen practitioners many times in Chinatown and knows that the practice is banned in China.

“I am not surprised [about the persecution] since the CCP does not allow freedom of belief,” he said.

He was glad that people can have different voices and that basic freedoms and human rights are respected in Taiwan.

Mr. Luo goes to China every couple of years and knows about the persecution. He was glad to be able to see the Falun Gong parade in Taiwan every year.

“I still can’t figure out why the CCP has to persecute Falun Gong and not allow a practice of kindness,” Mr. Luo. “China is the only country in the world that bans Falun Gong.”

“Once Imprisoned for Eight Years, Heilongjiang Woman Arrested Again for Her Faith in Falun Gong”