(Minghui.org) The Tian Guo Marching Band and a group of practitioners demonstrating the Falun Gong exercises participated in the Rose Festival's Grande Parade in Welland, Canada, on Sunday, June 23, 2019.

The parade was broadcast live via YourTV, a local community channel. The Rose Festival organizers posted a photograph of Falun Gong practitioners in the Grande Parade on its official website.

The Tian Guo Marching Band and the Falun Gong exercise demonstration made up the finale of the parade. As the Falun Gong procession marched through streets, spectators applauded and cheered. 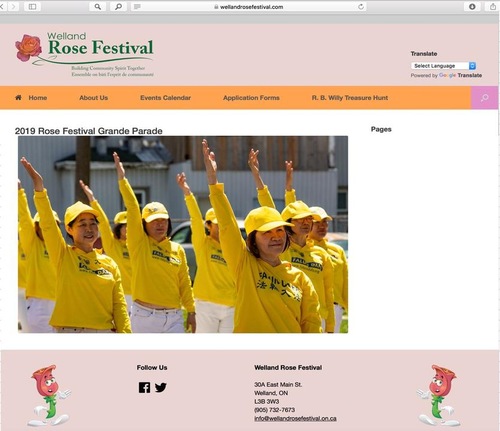 A photo of the Falun Gong exercise demonstration was posted on the Rose Festival’s official website as a parade highlight.

Welland residents Maria and her mother Yoly applauded enthusiastically as the Tian Guo Marching Band paraded by. “They are really great! I like their music very much,” Maria commented.

This was the first time the women had heard about Falun Gong (also called Falun Dafa) and the persecution in China.

Maria said, “The Chinese government ignores the law and does what it likes. That is terrible. I practice yoga. It helps me relax. Falun Dafa is also a personal practice. Everyone should have the right to practice what they want to practice.”

Yoly thanked the Falun Gong practitioners for performing in the parade and sharing their messages with the people of Welland. “I will read more about Falun Gong online after I go home,” she said.

Jane from Toronto said she had read Falun Gong fliers before and knows that it is a traditional cultivation practice. “I have heard about the persecution in China. I think they [the Communist Party] are doing a really bad thing,” Jane said.

Ms. Ni and her husband are originally from Jilin Province in China and have lived in Toronto for many years. They were staying with their daughter in Welland and decided to watch the parade.

Ms. Ni had known about Falun Gong and the persecution while they were still living in China. “I like the Tian Guo Marching Band,” Ms. Ni said. “They [Falun Gong practitioners] are good people. What the Communist Party does is inexcusably wicked.”