(Minghui.org) Falun Gong practitioners in New York City participated in the Avenue of the Americas Spring Fair in Manhattan on Sunday, June 16, 2019. About 200 booths with arts, handicrafts, and food were set up along 6th Avenue from 42nd Street to 56th St. in Midtown Manhattan. Practitioners demonstrated the five exercises to soothing music and talked to people about the Chinese Communist Party's (CCP) persecution of Falun Gong. 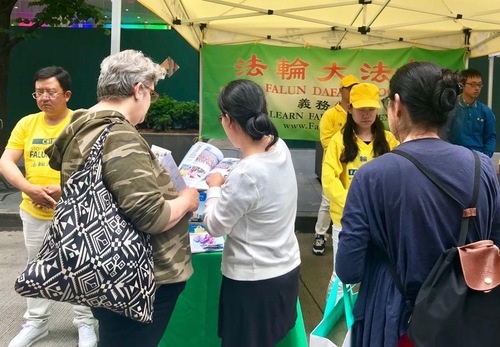 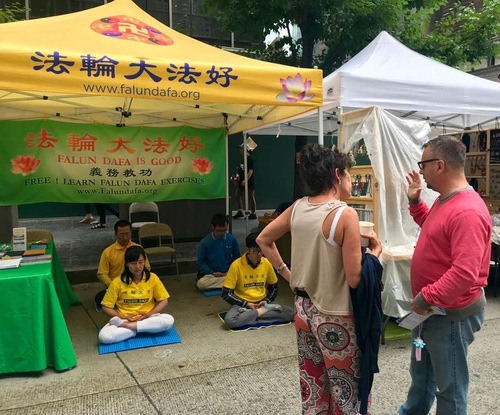 Practitioners introduce Falun Gong during the Avenue of the Americas Spring Fair in Manhattan held on Sunday, June 16. 2019 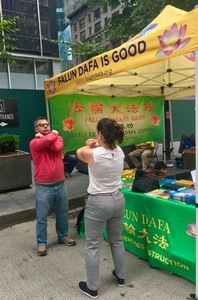 Mira from Russia said that she knew very well about the evil nature of Communism because her family had been persecuted by the Soviet government. When she was born her family named her “Mira”, which means “peace” because it was all they wanted. She had also heard about the CCP's violations of human rights and the brutal persecution of Falun Gong. Mira said she planned to visit Spain soon and would tell her friends there about the persecution in China.

Many people showed great interest in learning Falun Gong. They were very grateful to learn about the ancient practice's great health benefits and hoped the persecution would end soon. A veteran that had come to the fair said he knew that the CCP was an evil regime. He had received a Falun Gong book as a gift and he planned to read it when he got back home.

“Master's Arrangements Are the Best”