(Minghui.org) Falun Dafa practitioners participated in the 43th Starlight Parade in Portland, Oregon, on June 1, 2019, and their float won first place in the Non-Commercial Division. The parade is part of the Portland Rose Festival, which is a tradition that goes back more than 100 years. 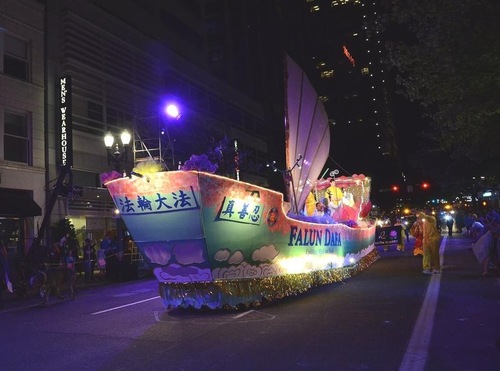 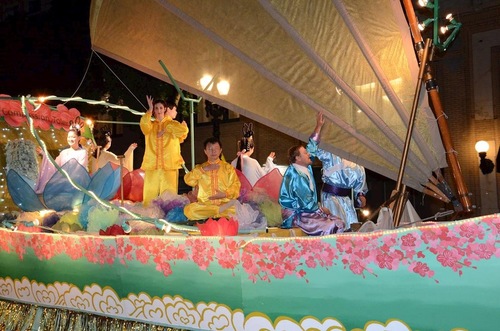 About 100 illuminated entries participated in the 2.25-mile parade that started at 8:30 p.m. and finished at 11 p.m. The practitioners' float was chosen for the finale. Impressed by the beauty of the design, spectators applauded the float as it passed. Some called aloud “Falun Dafa,” while others gave thumbs-up or took pictures. Quite a few onlookers followed along with the practitioners on the float as they performed the exercise movements.

One of the practitioners participating in the parade explained that the float's green color represents the season of spring. The plum blossoms on the boat stand for practitioners' courage and determination despite the harsh persecution in China. The golden sails and the heavenly girls on the lotus seat illustrate the practitioners' improvement in mind and body. The words “Falun Dafa” and “Truthfulness-Compassion-Forbearance” were displayed on both sides of the boat.

From Coast to Coast

One couple was excited to see the float and said that they had seen the practitioners' march in New York recently. “That march lasted about two hours and it was really amazing!” the wife exclaimed. She took a picture of the float and said she would share the information with her friends.

A photograph of the float has appeared on the front page of the parade's website for several years. A new organizer for the parade heard about the float from previous years and especially came over to see its assembly. Another organizer came to study the interior design of the float and was glad to hear that Falun Dafa is practiced around the world.

Many people took pictures or videos of the float and asked about the Chinese characters on it. When a young man heard about the principles of Truthfulness-Compassion-Forbearance and how practitioners adhered to these principles every day, he nodded in agreement.

Practitioners were able to pass out materials during the parade, and many people were shocked to learn about the persecution in China against Falun Dafa, especially the forced organ harvesting. Many people told practitioners that they would read more about it online. One young man said he knew that the Chinese Communist Party was bad, but did not expect the suppression would be so vicious. He said the persecution would not last long and believed practitioners would be able to freely practice their belief soon.

Portland is the second most populous city in the Pacific Northwest after Seattle. An estimated 300,000 people watched the parade in person, while the television audience was up to 1 million. Fox 12 television broadcast the parade live and mentioned the principles of Truthfulness-Compassion-Forbearance during the broadcast. The television host told viewers that the practice would benefit people of all ages and that information is available free of charge at FalunDafa.org.

“I Lost My Daughter Three Times in My Dreams”