Blinded by Abuse in Labor Camp, Former Businesswoman Suffering More Abuse in Prison for Her Faith

(Minghui.org) Ms. Zhang Chunyu, a 64-year-old Falun Gong practitioner in Acheng City, Heilongjiang Province, was sentenced to 4.5 years of imprisonment for her belief. She has been suffering from physical abuse, mental stress, and humiliation since she was admitted to Heilongjiang Province Women's Prison on April 18, 2018.

Ms. Zhang was a former businesswoman and she credits the improvement of her moral character to Falun Gong, a mind-body practice that is based on the principles of Truthfulness-Compassion-Forbearance.

After the Chinese Communist Party began to persecute Falun Gong in July 1999, Ms. Zhang was detained multiple times for refusing to renounce her faith. While serving her second forced labor term in 2002, she was struck on the left eye by a male guard and has since gone blind in that eye. 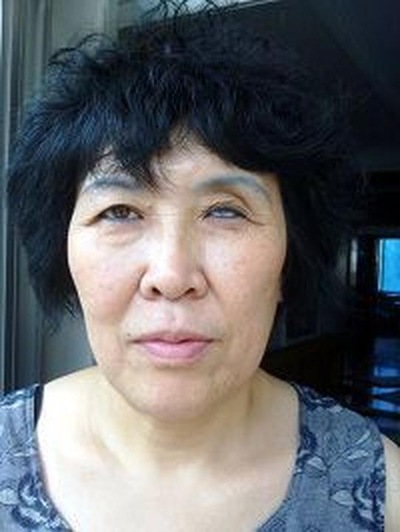 Ms. Zhang Chunyu was blinded in the left eye due to abuse at Wanjia Labor Camp.

Ms. Zhang's latest arrest on February 25, 2017 happened nine days after her husband's passing. The new widow, who had lost her son to an illness three years before her husband, appeared in court in November 2017 and was sentenced to prison months later.

Guards at Heilongjiang Province Women's Prison have been using various means to try to force Ms. Zhang to renounce her belief since she was sent there in April 2018. They gave incentives to the prison inmates, such as early release, to instigate them to intensify the physical abuse, mental torture, and humiliation of Ms. Zhang. Inmates have been assigned to monitor her around the clock.

The mistreatment has led to Ms. Zhang suffering from loose teeth and gum damage.

One time, when she saw that another practitioner needed toilet paper, Ms. Zhang tried to give some to her. The inmate watching Ms. Zhang snatched the tissue from her and swore at her.

Prison officials have also been rotating Ms. Zhang through various prison divisions. Every time she's moved to a new division, inmates there are pressured to abuse her physically and mentally. The fear of having to face a new group of inmates after another and endure another round of abuse has been beyond description. Ms. Zhang has so far stayed in all of the prison divisions except one.

Ms. Zhang Chunyu began practicing Falun Gong in June 1996 and, by following the principles of the practice, she became a better person. “When doing business in the past, like my peers, I was not honest and often sold inferior food as premium for more profit. I no longer did so after beginning to practice Falun Gong,” she recalled. In addition, her skin disease, bronchitis, and lymph node problems also disappeared after she took up the practice.

Because of her belief and efforts to tell others about the practice, Ms. Zhang was detained numerous times. At a detention center in February 2000, guards whipped her hard and poured cold water on her in freezing winter.

On March 5, 2001, Ms. Zhang was sent to Wanjia Labor Camp with a term of one year. For over 20 days she was kept in solitary confinement where the moisture and mold led to scabies all over her body. In order to be allowed to visit detained practitioners in the labor camp, family members had to step on a portrait of Falun Gong's founder and sign paperwork slandering Falun Gong. This led to many supportive family members unable to see detained practitioners and obtain information on how they were mistreated.

Ms. Zhang's family didn't learn of her suffering until she was released in October 2001.

She was arrested again in February 2002 and sent to Wanjia Labor Camp weeks later, on March 8, to serve a term of three years.

Ms. Zhang recalled her suffering at the labor camp, “Every day, guards Zhao Yuqing and Yao Changfu fully charged their electric batons. They ordered inmates to remove my clothes down to my underwear. They then shocked my back with electric batons inch by inch.

“As if that was not enough, one day Zhao slapped me hard in the face and hit me on the left eye. I felt extreme pain and my left eye went blind afterwards.”

On July 3, 2015, Ms. Zhang filed a criminal complaint to China's Supreme People's Procuratorate and Supreme People's Court against former Chinese Communist Party leader Jiang Zemin for suppressing Falun Gong. “The persecution not only affected me, but also my family. Both my son and my husband were so traumatized that they developed heart problems. My son died of his illness at age 33 in September 2014. My father too, was in constant stress and died early. All of this was caused by Jiang's persecution policy and he should be held responsible for that,” she wrote.