(Minghui.org) Falun Gong practitioners in Hualien, Taiwan introduced the practice at the train station square on May 26, 2019, and raised awareness of the Chinese Communist Party's (CCP) persecution. As they demonstrated the exercises, the peaceful music drew many tourists who stopped to take photos. 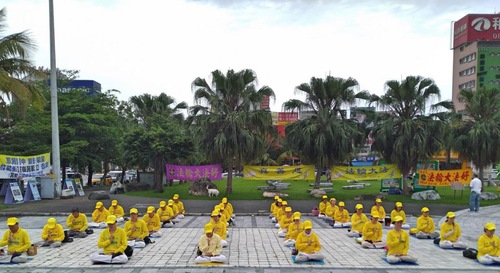 Falun Gong practitioners demonstrate the exercises on the square in front of the train station in Hualien, Taiwan on May 26, 2019. 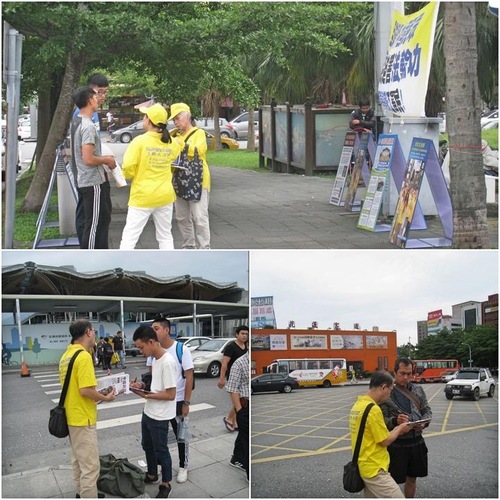 People sign the petition calling to end the persecution in China and bring the perpetrators to justice.

Mr. Su, an engineer, stopped by the event and remarked, “The CCP is afraid of losing control. It only cares about its own interests but does not allow people to have their own beliefs or privacy.”

He continued, “The people have no right to speak. Living in such an environment, life is not guaranteed. I want to support you. And I feel that as a citizen in the 21st century, live organ harvesting is shameful for human beings around the world. I hope that the whole world hears the voice of justice, and works to end the persecution. Thank you for your perseverance!”

Another passerby, Ms. Lin said, “I think that practicing Falun Gong is very good. People who practice it just want good health.” She felt that the forced organ harvesting from living practitioners was wrong, and signed the petition calling for an end to the persecution.

Ms. Chen, a high school teacher, said, “One of my friends from China planned to bring his wife and child to Taiwan to celebrate the holidays. Their application was rejected because his wife practices Falun Gong. Her ID card is being tracked! To us Taiwanese, this is really ridiculous. Here in Taiwan we enjoy freedom of belief.

“These CCP control methods give me a clear understanding of the CCP. We should not be deceived by its lies. I hope that the Chinese people can have a free and democratic life as soon as possible. I often see Falun Gong practitioners calling for an end to the persecution, no matter the weather – on the coldest winter days or in the heat of summer. I admire you. Please keep it up!"

Falun Gong was first introduced to the public in 1992. Nearly 100 million people across China were soon practicing Falun Gong after experiencing improvements in their health and character. Jiang Zemin, former head of the CCP, perceived the spiritual discipline's growing popularity as a threat to the CCP's atheistic ideology and issued an order to ban Falun Gong on July 20, 1999.

Minghui.org has confirmed the deaths of thousands of Falun Gong practitioners in the persecution over the past 20 years. Due to the CCP's information blockade, the actual number is suspected to be much higher. More have been imprisoned and tortured for their faith. Evidence shows that the CCP conducts state-sanctioned organ harvesting from living detained practitioners, who are killed in the process, to supply the organ transplantation industry.

“[Minghui Fa Conference] Cooperating with Minghui: I No Longer Feel Like a Solitary Practitioner”