(Minghui.org) The International Dragon Boat Race Festival was held in Toronto from June 15 - 16, 2019. More than 120 teams from all over the world as well as crowds of spectators gathered on Centre Island. Many Chinese came out to enjoy the popular annual event including several Chinese parents who came to Toronto for their children's graduation ceremonies. Falun Gong practitioners took this opportunity to clear up any misunderstandings they had about Falun Gong and the persecution.

“I Will Certainly Practice Falun Gong!”

Ms. Chen, a new immigrant from Guangdong Province, came to the practitioners' booth to learn the exercises. She said, “Nearly every person in China knows about Falun Gong, but I was too afraid to practice because of the persecution. Now I've left China and have freedom. I will certainly practice Falun Gong! I bought two books and I've been looking for a group exercise site. My son came with me today but wanted to go home. I stayed to learn the exercises. I have been looking forward to it for such a long time!”

Ms. Chen added, “I know Falun Gong has been persecuted badly in China. I watched a video about Jiang's order to use Falun Gong people's organs for transplant surgeries. They were killed without using anesthetics. It's heart-wrenching! I know the way the Chinese Communist Party (CCP) has treated people. When my second child was born, the CCP sent several authorities to my home. It was frightening! I know how serious their persecution is. It's absolutely horrible!”

Visitors from China Long for Freedom

Mr. Zhu and his wife came from Northeast China for their son's graduation ceremony. They decided to withdraw their memberships in the Chinese Communist Party organizations when they were in downtown Toronto and were happy to see Falun Gong practitioners at Centre Island. Mr. Zhu said, “I was able to read the Epoch Times and the Nine Commentaries on the Communist Party online using the anti-firewall software, Freegate, 10 years ago. It's a pity the version I had stopped working because of the Communist Party's firewall.” Mr. Zhu was very happy when a practitioner gave him the latest version of Freegate.

Mr. Zhu and his wife asked the practitioner for more details about the CCP's persecution. Mr. Zhu said, “I want to learn more about Falun Gong, but China has no freedom of belief or speech. Now that I have a new way to access the Internet, I will definitely continue reading about it. The CCP is facing external sanctions and internal disasters. I hope it will collapse soon so people in China will be able to have freedom of belief!”

Tom from Tianjin, China, happened to pass the practitioners' activities on Centre Island. He took an introductory flyer and chatted with a practitioner. He learned that Falun Gong had been practiced by people in over 100 countries, and China was the only country where practitioners were persecuted. After realizing the CCP is persecuting all Chinese, Tom decided to quit the Youth League and Young Pioneers, which he joined when he was young. 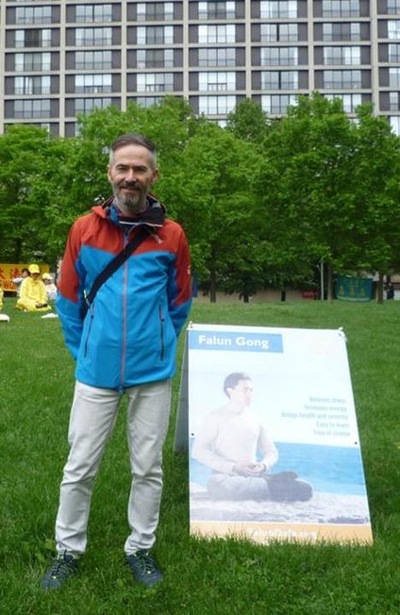 Mr. Tony O'Shea-poon stopped to chat with practitioners. He said it made no sense to persecute such a kind group of people.

Mr. Tony O'Shea-poon, a therapist and developer of websites and social media, told a practitioner that he had heard about Falun Gong and the persecution from his Chinese business partner. Tony thought it made no sense to persecute such a peaceful and harmonious practice. He said that he couldn't understand why the CCP persecuted them so cruelly.

“Abuses in the No. 8 Ward, Heilongjiang Provincial Women's Prison”