(Minghui.org) Falun Dafa practitioners have visited Niagara Falls on a regular basis since last summer to tell people about Falun Dafa and the ongoing suppression in China. Many of the people they have come into contact with are thankful for the information, and many Chinese tourists have decided to quit the Chinese Communist Party (CCP) organization after hearing about the brutality of the persecution of Falun Dafa practitioners.

Located on the border of Ontario in Canada and New York in the United States, Niagara Falls is a renowned tourist site that attracts about 20 million tourists per year. With the main waterfalls and best views being on the Canadian side, practitioners in Toronto make the one-and-a-half-hour journey there every day to introduce the ancient meditation practice to people. 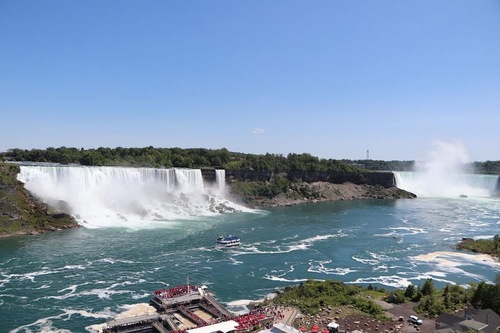 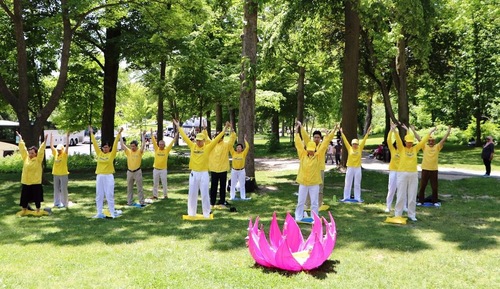 Falun Dafa practitioners do the exercises near Niagara Falls. 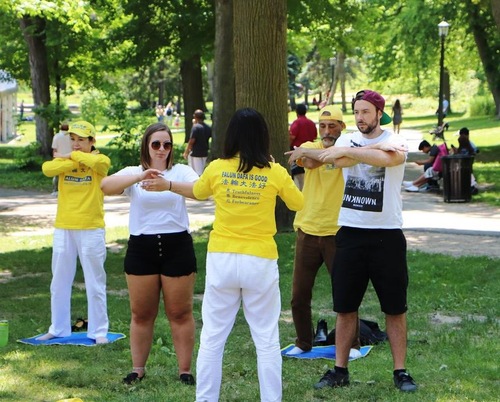 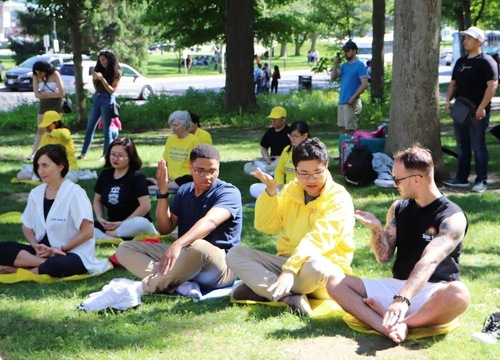 Tourists learn the exercises from practitioners.

Sayed Hassamudin, from Pakistan, came to Niagara Falls with his friends. Although this was the first time he had heard about Falun Dafa, he was impressed after seeing the practitioners meditating, and stopped to learn the exercises. “Right after doing the first set of exercises, I noticed these exercises brought me relaxation,” he said.

Mir and Shraf, two brothers from Afghanistan who were traveling with Sayed, waited patiently while he learned the exercises. They took pictures and videos of the exercises and said they would read about the practice after returning home. When they were told about the severe human rights violations against Falun Dafa practitioners in China, they signed a petition calling on international society to help stop the brutality in China. 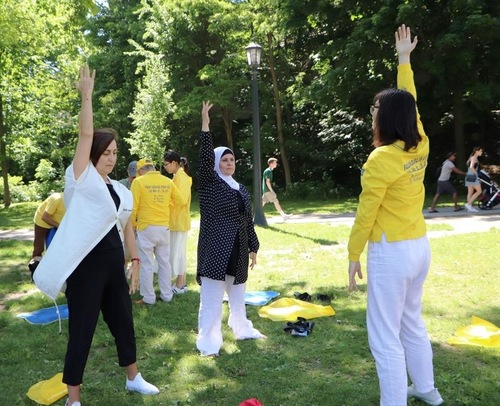 Inga from Russia learned both the standing and sitting exercises.

Inga from Russia had not heard of Falun Dafa before. She learned both the standing exercises and the sitting meditation. “This is amazing!” she exclaimed. She said her back was a bit numb before doing the exercises, but she now felt much better, and her hands were warm with energy. “I will definitely follow up with this on FalunDafa.org,” she added.

“This is surprisingly good” 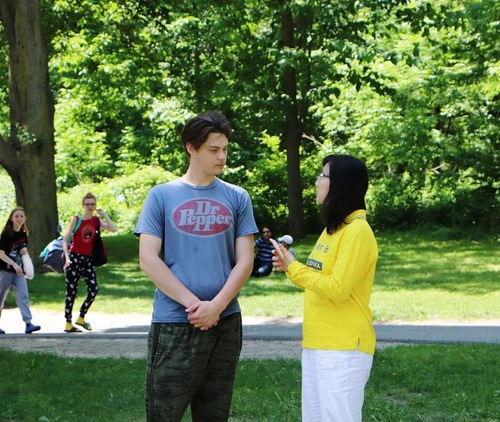 Scott learned the exercises and says he will learn more from the Falun Dafa website.

Scott from Grimsby, Ontario, recently graduated from college and found a job. He had seen practitioners exercising in Mississauga and other places, and he had thought about trying the meditation but had not yet had a chance. “I’m glad I finally gave it a try today—this is surprisingly good,” he said. He said he plans to continue learning through the Falun Dafa website.

George and Sarah are siblings from Egypt. They chatted with practitioners and then learned the exercises. George is a college student majoring in science and technology, while Sarah studies politics. “We are both very interested in this and the practitioners are so helpful,” Sarah said. “It’s a very good experience doing the exercises—very relaxed and as if energy flows through my body,” her brother added.

One high school group from Mexico also joined the practitioners to learn the meditation. “It is very graceful and we all like it so much!” said Karla. “We are very fortunate to meet them [Falun Dafa practitioners] here and it makes our trip so special,” said Jennifer with a smile.

Chinese Tourist: “I have never heard about this before”

Although Falun Dafa was first introduced to the public in China, many Chinese people were misled by the hate propaganda from the CCP over the past 20 years. For this reason practitioners outside of China often come to Niagara Falls and other tourist sites to help Chinese tourists learn the truth about the slanderous propaganda. “After I explained to them what the CCP has done in the past to harm innocent people, 56 Chinese tourists agreed to quit the CCP organizations today,” said Ms. Zhang, a volunteer practitioner, on June 22, 2019.

One of the tourists, Mr. Zhang, took photos of the group of practitioners meditating and asked for materials to read. He said, “Your exercises look good. It is hard to see something like this in China, because many things are blocked over there.” When a practitioner talked about how practitioners were mistreated in China for their belief, he agreed and said the regime had been doing bad deeds since its inception. When he heard about renouncing the CCP organizations, he was very interested, “I have never heard about this before.” In the end, he quit the CCP’s youth organizations: the Youth League and the Young Pioneers.

Ms. Zhao is a student who is studying in Canada. She came to Niagara Falls with her father who was visiting from China. The father initially did not want to listen to practitioners, but his daughter was curious to find out more about Falun Gong. A practitioner told her that since everyone had vowed to devote their life to the CCP regime when they joined its various organizations, each person should formally announce that they quit the organizations. The daughter nodded and agreed to do so. The father, too, became intrigued. He not only renounced his membership in the CCP organizations he had joined in the past but also sincerely thanked practitioners by bowing and holding his hands together in front of his chest.

Mr. Li, who is pursuing his post-doctorate studies at the University of Toronto, came to Niagara Falls with his mother. A practitioner talked to them about the benefits she had derived from the practice an about karmic relationships mentioned in traditional Chinese culture, and Mr. Li was interested. In the end, both he and his mother decided to quit the CCP organizations they had joined. They were also surprised to hear that Falun Dafa is being practiced in more than 100 countries and that the teachings had been translated into more than 40 languages. “I'm glad we are here today. Thank you for telling us all of this,” Mr. Li said.