(Minghui.org) Today's news from China includes incidents of persecution that took place in 12 cities or counties in 6 provinces，where at least 21 practitioners were recently persecuted for their belief. 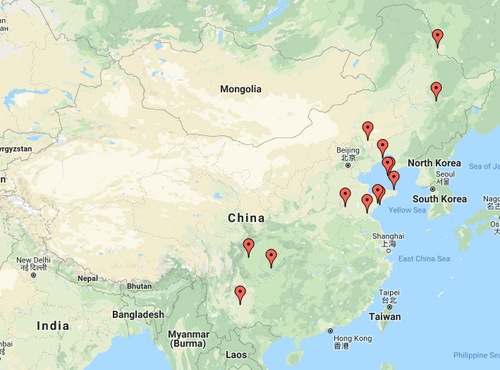 Ms. Qian Jinhua was arrested in late September 2018. The Lanshan Procuratorate turned her case over to the Lanshan District Court on February 27, 2019. She was tried on April 30, and was recently sentenced to a two-year prison term.

Mr. Gong Maohai, Ms. Hu Jinping, and Ms. Hu Jinhui were arrested with Ms. Qian. They have been held in custody.

Mr. Ma Yitao and three other practitioners from Bei'an City were tried by the Yabuli Forest Area Court in late May 2019. They appealed to the Forest Intermediate Court, which upheld the original verdicts on May 14 without a hearing.

Mr. Ma was sentenced to a seven-year prison term, fined 20,000 yuan, and had his van confiscated. He was taken to the Hulan Prison.

Mr. Li Xueling was sentenced to a four-year prison term and fined 10,000 yuan. He was also taken to the Hulan Prison.

Ms. Ma Yingjie was sentenced to an 18-month prison term and fined 5,000 yuan. She was released on March 9.

Ms. Sheng Chunxia was sentenced to three years in prison, with four years probation, and fined 5,000 yuan. She was released on bail, and is under surveillance at home.

Participant in the persecution of these practitioners:Criminal Justice Division, Intermediate Court: +86-451-86338621

Ms. Yi Wenjun was arrested at home by officers from the Caotang Police Station in the Qingyang District on February 12, 2018. She was taken to the Chengdu City Detention Center, where she has been mistreated. In addition to limited meals, she has not been allowed to wash or clean herself for over a month, and she has been physically abused.

Mr. Wang Xinrong from Qitaihe City was displaced due to the persecution. He went to Shanda Hospital in the West Coast New District to visit a patient on June 4, 2019. Officers from the Changjianglu Police Station, Huangdao Development Zone, broke into the patient's room and arrested Mr. Wang at around midday.

Ms. Chang Qiulin was arrested on June 3, 2019, for talking to people about Falun Gong.

Ms. Ren Suxiang, 55, from the Yuanbao District, was sentenced to an eight-year prison term by the Yuanbao District Court on April 15, 2019. Her family later learned that the court directly took 20,000 yuan from Ms. Ren's bank account without notifying her or her family.

Mr. Yan Wei was arrested on June 1, 2019, and taken to the Weihai City Detention Center.

Mr. Wang Hongtao from Huayuan Village was arrested by Chang Cheng, director of the Ningyuan Police Station, and two plainclothes officers on May 29, 2019. He is being held in the Huludao Detention Center.

Mr. Li Baojian from the Huangdao District was arrested at home on June 3, 2019, for talking to people about Falun Gong.

Ms. Li Shulian from Ningyuan Town was spotted and arrested by two officers, including Liang Yu, when she was distributing Falun Gong materials on June 5, 2019. She was taken to the local police station and then to the Harbin City Detention Center.

Ms. Hu Lifang, around 60 years old, from the Shapingba District, was followed by two police officers when she was calling people and talking to them about Falun Gong about two weeks ago. She was arrested at home, and her residence was ransacked.

Ms. Pei Yanfang was arrested at work by officers from the Songming County Domestic Security Division on the afternoon of May 31, 2019. Officers from the county police department later arrived in a riot police car at Ms. Pei's home in the Yuanding Residential Community, and ransacked it.

Ms. Pei was taken to the Kunming City Detention Center on June 4.

Ms. Liu Yanhua from the Lushun District was arrested by officers from the Shuishiying Police Station on May 30, 2019, for talking to people about Falun Gong. Her home was ransacked.

Ms. Liu was taken to the Dalian Drug Rehabilitation Center, and released on June 4.

“Improving on My Cultivation Path: Being Vigilant While Looking Inward”