From a Destitute Man to a Beloved Educator: A Teacher's Cultivation Journey

(Minghui.org) After graduating from a Normal School and fulfilling his military duty, all Mr. Tsai Shouren wanted was to pursue money and fame – until a car accident changed his outlook on life and he began his spiritual journey. He found Falun Gong, a mind-body practice based on the principles of Truthfulness-Compassion-Forbearance, and has been enjoying its benefits for more than two decades.

Mr. Tsai said, “When I finished my military service, I met a few friends who claimed they could teach me to get rich quick. I was an elementary school teacher at that time, but I wanted to make more money. To be business partners, I used my mother's house as collateral to borrow one-half million NTD (new Taiwan dollar). However, those friends disappeared the day after they took the money. I was anxious. In order to earn back the loss, I tried the business idea myself and ended up with more losses...”

Mr. Tsai, at 28, was almost two million dollars in debt. He almost quit the teaching job and did his utmost to turn the raging tide. In his mind, money was the only way to happiness. This notion finally was broken up by a traffic accident.

Mr. Tsai said, “One day on the way to Hualien, about 100 miles from the capital Taipei, to check out a parcel of land, my friend and I were involved in a traffic accident. We were all right, but the car was totaled. At that moment, I suddenly woke up from the dream of making a fortune from the land. I thought of cultivation. I would not try to vainly pursue money anymore.”

There is a saying: “Those who survive a catastrophe are bound to have good fortune.”

Mr. Tsai seized the day after this accident and began to think deeply about the reason that heaven saved his life.

He said, “During that period, I was disappointed with my life and felt exhausted, both physically and mentally. I treated people so sincerely and believed in my friends, but I was constantly deceived and used. Confucius said, 'A person who learns the truth in the morning can die in the evening without regret.' I read the books of ancient sages in an attempt to find my true self. I even stayed in a temple for one week and learned tai-chi. But I felt life was baseless and could not find a righteous path that would return to my original, true self.”

He continued, “In the spring of 1998, I was practicing tai-chi with a few friends in the Taipei Youth Park. I was then 34. A Falun Gong practitioner was teaching people the exercises near our site. I learned the third exercise, Penetrating the Two Cosmic Extremes, that day. When I practiced the exercise at home that evening, I felt a surge of energy inside my body.”

This sparked within him a strong desire to practice Falun Gong. Four months later, he was invited by the same practitioner to attend a nine-day class.

Mr. Tsai said, “I looked at Master Li''s (the founder) video of the lecture and felt that Master was someone familiar and very kind. Every word Master said resonated in my heart. I felt so wonderful. My spirit was low at the end of the ninth day because there was no more class and I would not be able to see Master again.”

Staying True to One Practice

The first challenge for Mr. Tsai was to adhere to the common religious tenet of “No Second Cultivation Way” because he had practiced tai-chi for years and loved it so much.

“I floated between the practices of Falun Gong and tai-chi for more than one month. On September 16, 1998, I started to have stomach aches after the Falun Gong exercises. Master taught us to stay true to one practice. I immediately realized that Master would not take care of me if I still did not enlighten to this.”

“What does character consist of, then? It includes being virtuous (as virtue is physically real), practicing self-restraint, having faith, letting go of what others normally desire and hold onto, and being able to suffer gracefully. So there is a lot to it. We should strive to perfect every facet of our character. And by doing so you will make real spiritual progress. It is one of the keys to developing powerful, higher energy.” (When Practicing Doesn’t Bring Results, The First Talk, Zhuan Falun) 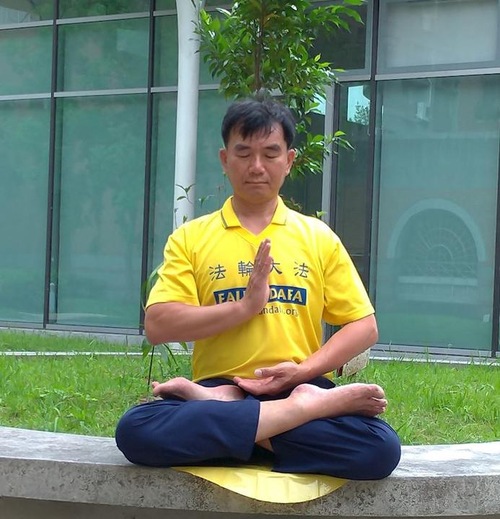 Mr. Tsai said, “Doing meditation in the full lotus position was very difficult for me. The pain was so unbearable that I could not keep going. While I was suffering, a beam of light showed up in front of my celestial eye. I had a soft and comfortable feeling of holiness, which could not be described in words. I knew that the light was sent by Master to encourage me to be persistent. Since that day, I have never had any thought of giving up the practice.”

He added, “In the beginning, I felt that the Falun (law wheel) was turning clockwise and counterclockwise. When I continuously followed the standards of Dafa in my conduct, Master would continuously purify my body. It was a really mysterious feeling. As long as you cultivate diligently, all abnormal conditions will be adjusted.”

Mr. Tsai used to catch colds easily and kept many cold medicines in the drawer. After taking up the practice, he became very healthy. His eyes were clear and his face was rosy. His wife even asked why all of the medicine in his drawer had disappeared.

Mr. Tsai's wife developed symptoms of sleep apnea in 2004. Her breathing would gradually weaken at night or even stop when she slept. She had visited many hospitals, seen many physicians, and taken many medicines, but nothing worked. She lost more than 20 pounds in just over a month. One night, when the problem happened again, instead of going to the hospital, she asked her husband to teach her Falun Gong.

Mr. Tsai said, “I brought my wife with me to the group exercises site around 5:00 a.m. the following morning. She became a practitioner after that. Slowly, her health changed. She gained back her weight and her face turned rosy. On one occasion, her breath began to weaken when she was doing the fifth exercise, Strengthening Divine Powers. She did not know what to do but shouted, 'Master, please save me!' Her breath immediately stabilized. Since this incident, she cultivated more firmly. Her breathing problem completely disappeared a few weeks after she began the exercises. Many of her relatives who have witnessed her change have also become practitioners.”

Mr. Tsai was the sports group leader under the physical education department at his school, and was responsible for carrying out some projects the department director brought in. There would be a monetary award to the school if the projects were well done.

“Since learning Falun Dafa these workers have been putting in extra hours and working conscientiously and with a lot of heart. They don’t quibble over the work they’re assigned to do, and aren’t just thinking about themselves.” (The Fourth Talk, Zhuan Falun)

He followed the standards of Dafa to work hard on one project, working until midnight for days. His colleagues were surprised at his perseverance. As a result, the project was a success and the school received the bonus.

Mr. Tsai later established a group exercises site on campus and offered a Falun Gong teacher training class. He told the attending teachers the reasons for his improvement and the goodness of Falun Gong.

Mr. Tsai realized the importance of moral education when he became the life education program leader. He proactively wrote an implementation plan and arranged for each class in the school to have a moral education course each semester.

He emphasized, “I even offered to teach the course. Some teachers said that I was so foolish to take on so many classes. But I am a Dafa disciple, so I felt it was worthwhile to do so.”

“Whereas people in history always projected a healthy countenance and had an upright air about them. They looked pretty good.” (What is a Dafa Disciple, Fa Teaching Given at the 2011 New York Fa Conference)

Mr. Tsai shared the principles of Truthfulness-Compassion-Forbearance and some small stories written in the book Zhuan Falunwith his students. He hoped that his students could live life with sincerity, kindness, perseverance, and integrity.

He was head of the Life Education Group under the disciplinary office for 13 years and monitored the students' behaviors on campus. He was praised as an “everlasting life educator.” In 2015, he retired after thirty years of teaching.

Mr. Tsai has for years coordinated with local police for Falun Gong activities. Unlike the police officers who serve as a “black hand” for the CCP, the officers in Taiwan are supportive of Falun Gong. They praise the practitioners. Some said that Falun Gong practitioners bring positive energy when they practice group exercises.

In Taiwan, Falun Gong is protected by national law. Everyone can freely practice Dafa. Mr. Tsai would like to tell people that Falun Dafa is profound and Master Li is the best person in the world. He hopes that everyone can cherish the opportunity and read the book Zhuan Falun if they want to cultivate.

“"I'll Wait for the Next Bus, I Want to Hear about Falun Dafa””