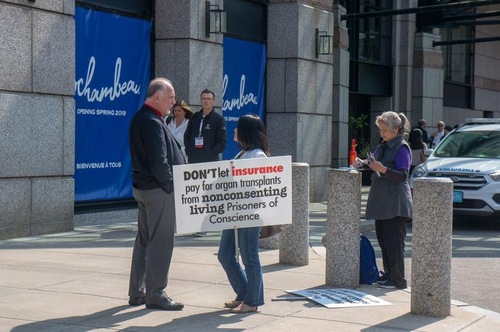 A Falun Gong practitioner talks to a government official about the CCP's persecution, including the forced organ harvesting atrocities.

Practitioners held signs, display boards and banners, distributed introductory fliers to passersby, and talked with people about the CCP's persecution of Falun Gong (also known as Falun Dafa). They exposed the atrocity of forced organ harvesting from living practitioners. People were shocked and angered by the CCP's appalling crimes. They sincerely thanked practitioners for spreading the information and expressed their support for practitioners' efforts to expose and bring an end to the persecution.

Practitioners also collected signatures calling for the state government to ban organ tourism and the technical training of Chinese doctors in organ transplant surgeries. Their petition received great support from Massachusetts residents. According to the coordinator for the activities, their efforts sent a strong message: The United States can't stop at the level of discussion, but should take action to enact laws.

The activities received particularly supportive responses from medical professionals this year. When the same conference was held in Boston three years ago, many doctors didn't know that the CCP had targeted Falun Gong practitioners as organ sources. Some were even doubtful and maintained a “let's wait and see” attitude. However, this year many doctors took informational fliers and took pictures of the practitioners' banners. Some said they would like to help spread the information. Many said that they would send the information to President Trump, asking him to take action.

When Chinese doctors passed the display, Falun Gong practitioners took the opportunity to tell them that the CCP would fall and warned them not to participate in the persecution.

Many Chinese who happened to be in the area also witnessed the practitioners' activities. Practitioners told them how the CCP had created a moral crisis in China, which could make anyone a victim. A number of Chinese took this opportunity to quit the Chinese Communist Party and its affiliated youth organizations.