(Minghui.org) A woman in Pingdu City, Shandong Province was on her way home on January 11, 2019, when she was arrested by an officer who had been shadowing her. She was targeted because she refused to give up her belief in Falun Gong, a mind and body improvement system persecuted in China since 1999.

Ms. Qu Yuanzhi was sent to a detention center the very next day and remains captive at the time of writing. Her case now rests with the local court and she is facing trial. Her families and friends are fighting to have her case dropped as she was merely exercising her constitutional right to freedom of belief. Many residents have also signed a petition calling for her release. 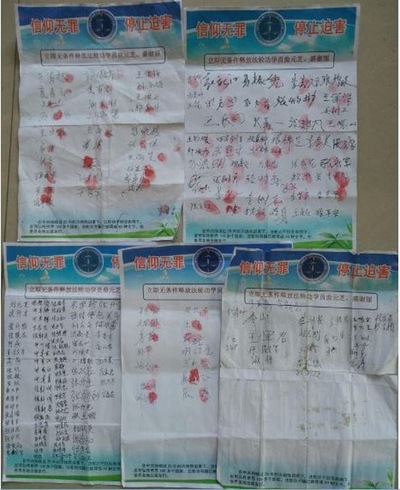 Before she started practicing of Falun Gong, Ms. Qu was too weak to work and often fainted. Her health improved dramatically after she became a Falun Gong practitioner. She held firm to her faith after the persecution began and was incarcerated and tortured on multiple occasions.

On the day of Ms. Qu’s latest arrest, she was driving home with another practitioner Ms. Sheng Shuli and Ms. Sheng’s 18-month-old grandson. Officer Wang Youwu, who had been following her, pulled her over and arrested her and Ms. Sheng. The two practitioners were first taken to Zhugou Police Station and then transferred to Pudong Detention Center the next day.

About a week later Sun Tao, deputy chief of Zhugou Police Station, led nine officers to Ms. Qu’s home. Her husband happened to just step outside, and he refused to let the police in. Four officers forced him into a police vehicle and threatened to put him in jail. His son came out and questioned the police conduct. Chief Sun told the son that his mother was arrested for practicing Falun Gong and that his father was obstructing law enforcement.

Ms. Qu’s son stated that his mother’s practice violated no law and demanded to see evidence the police used to detain her. Chief Sun replied that the Chinese Communist Party is running the country and that its policies were the laws. As the police threatened to incarcerate the son, Ms. Qu’s husband gave in and let the police into the house.

The police ransacked their home and confiscated Ms. Qu’s Falun Gong-related materials. Her husband and son were taken into police custody and released after they were forced to sign a piece of paper that they were not allowed to read.

Ms. Qu’s arrest was approved on March 2, nearly forty days after she was taken into the police custody. When her attorney visited her at Pudong Detention Center, she was very weak and her blood pressure was dangerously high, up to 190 mmHg. She expressed her determination to fight for her case to be dropped without charges.

Ms. Qu’s family went to the local Pingdu procuratorate many times to ask for her release. The staff asked them to fill out applications to review the necessity of the detention and to request for her release. Later the family was told that the case was lawful and would continue.

The family accidentally discovered that Ms. Qu’s case was forwarded to Huangdao Procuratorate on April 26 and to Huangdao Court on May 14 in the process of hiring a lawyer. The family was never informed of any of the case transfers.

Prior to the latest arrest, Ms. Qu suffered four other arrests and tortures because she refused to give up her practice.

Ms. Qu went to Beijing to protest against the persecution in July 2000. She was arrested in Beijing and detained for 20 days. In Beijing an officer repeatedly kicked her in the face when she refused to disclose her address. On her way home in a police car, she tried to tell the officer why the persecution was wrong, and the officer punched her in the face. When her older brother saw her and questioned the police why her face was swollen and disfigured, the police beat her brother. Ms. Qu was tied to a tree and beaten as a punishment trying to protect her brother.

Ms. Qu was arrested the second time in October 2001. The police tortured her and broke her leg.

In summer 2008 the police from Zhugou Police Station broke into her home and confiscated her Falun Gong materials.

The police arrested Ms. Qu in winter of 2009 because she spoke to others and tried to raise the awareness of the persecution. When her husband came home, the police were already ransacking their home without their presence.

In May 2013 the police arrested Ms. Qu and Ms. Sheng as they were telling people about Falun Gong and the persecution. In Jiudian Police Station the police tied Ms. Qu to an iron chair and interrogated her. They released her from the chair only after she fell ill.

“Dafa Has Changed Me Fundamentally”