(Minghui.org) Li Qiaoming, a detainee at Jinning Detention Center in Yunnan Province, died on February 12, 2009, about two weeks after he was taken there. News media first reported that he accidentally hit his head against a wall while playing hide-and-seek. A later investigation indicated Li was beaten to death by other inmates.

Li was not the only one abused in Yunnan Province's detention centers but never saw justice served. Many Falun Gong practitioners have been detained and tortured there for refusing to renounce their faith but have never seen their perpetrators held responsible.

Falun Gong, also known as Falun Dafa, is a meditation practice and spiritual discipline based on the principles of Truthfulness-Compassion-Forbearance. It has been persecuted by the Chinese communist regime since July 1999.

The authors of this report, a group of Falun Gong practitioners who had been detained at numerous detention centers in Yunnan at one point or another, share below the human rights violations against practitioners and non-practitioners that we have experienced and seen.

To manage detainees, officials usually assigned one inmate as the head of a cell, followed by a henchman. The cell head had supreme power and often worked with the henchman to punish other inmates. In addition, officials may arrange some informants to watch others and encourage inmates to report on each other.

Prior to 2004, each cell, especially those for male detainees, had a hierarchy with the cell head at the top followed by the henchman. A junior inmate was assigned to take care of the cell head, including getting meals, preparing water, cleaning clothes, and giving massages. The next tier were informants who were asked to keep an eye on everyone. The bottom rung consisted of the remaining detainees, who were responsible for doing various chores.

Newly admitted detainees were strip-searched upon arrival at detention centers. Officers confiscated not only their watches, necklaces, leather shoes, and belts but also metal buttons and zippers on their clothes.

Ms. Wu Zhiying, a 49-year-old Falun Gong practitioner in Kunming City, was ordered to remove all her clothes in front of three male officers and two female officers. When she protested, the male officers threatened to strip her naked themselves.

After entering the cell, there was another round of inspection. Any leftover valuables and most of the money would be taken by cell heads or henchmen. Prior to 2004, most new detainees were also “greeted” with various forms of abuse by inmates.

The abuse included beating newcomers, stripping them naked and slowly dripping cold water onto their bodies, “flying the airplane” (forcing newcomers to bend over with arms stretched upward behind their backs), and “putting them in an ice chest” (forcing newcomers to squat naked in freezing winter for a long time). For the females, the torture could include brushing their vagina with a toothbrush or hanging objects from their nipples with a string.

Mr. Zhou Jichang, a retiree of the Kunming Metallurgy Research Institute who was in his 70s, was taken to Wuhua Detention Center in 2001. After having chilled water poured on him, he was brutally beaten every day. He had bruises all over his body and difficulty moving his limbs.

During one campaign in 2005, Panlong Second Detention Center was given a quota to arrest drug addicts. One detained addict was ordered to assist the police in catching other addicts. Because the trip ended in vain, officers put 20-pound shackles on him as punishment. The next day, another drug addict was sent out, and this time the police were able to apprehend several other addicts. This inmate was rewarded upon returning.

A suspect in his 20s was once sent to Panlong Second Detention Center. Because the evidence to charge him was not sufficient, the police signaled the cell head to torture him in order to extract self-incriminating confessions. This young man had his head pushed into a toilet several times, which nearly suffocated him.

Many types of torture were employed in detention centers and carried out by either police officers or inmates. Some officers had martial arts training and often injured their victims severely.

Although small foot chains were enough to restrain inmates, including those on death row, heavier ones were often applied to inflict more pain. One time, after an inmate swore at guards, he was not only beaten but also chained to the ground for a month with no access to a toilet.

Guards and cell heads sometimes drew a circle on the floor or a bed and ordered the victim to stay inside the circle for a week or even a month. The victims were not allowed to watch television or buy daily necessities. Practitioners were also prohibited from talking to others or doing exercises.

Those subjected to solitary confinement were often restrained with their hands cuffed to their feet. They could only squat all the time and relieve themselves in the same place. In addition, guards often turned the surveillance camera away so it couldn't capture them torturing practitioners in solitary confinement.

Ms. Zhang Ruqiong, a 46-year-old practitioner, was held in Guandu Detention Center in August 2001. She said of her suffering there, “I was stripped naked at first. Because I was having my period, they later returned my underwear. Inmates kept insulting me and stuffed dirty socks into my mouth as I called out, 'Falun Dafa is good.'”

For doing Falun Gong exercises, Ms. Zhang was tied up by inmates so tightly that she lost consciousness after a few minutes. Guards then put her in solitary confinement and restrained her with 20-pound foot chains that were anchored to the floor. She had to endure both bug bites and the foul smell of human waste.

In addition, guards did not give her pads during her period, so the blood spread everywhere. “They did not give me water for several days, and when I asked for it, they force-fed me water laced with unknown drugs,” wrote Ms. Zhang. She became dizzy and developed high blood pressure as a result.

Ms. Li Junping, a retired worker of the Yunnan Conveying Machinery Factory, was kept at Xishan Detention Center in 2005 following her arrest for her faith in Falun Gong. With her four limbs tied to a bed, she was force-fed and forcibly injected with unknown drugs. Her family was also forced to pay 2,000 yuan to cover the drug cost.

Ms. Dai Jinlan is a retiree of a metallurgical plant in Gejiu City. After being arrested in August 2007, she was kept at Gejiu Detention Center. When she refused to renounce her faith in Falun Gong, guards stuck bamboo sticks into her thumb, index finger, and middle finger. They also forcibly took her fingerprints. 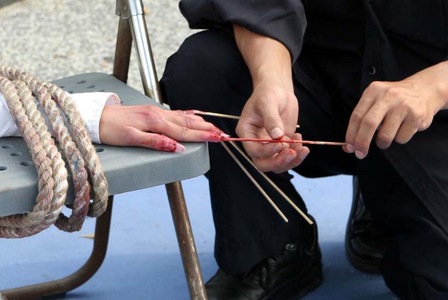 Ms. He Chunlian, 36, was kept at Mengzi Detention Center in 2009. As she shouted “Falun Dafa is good” and “Truthfulness-Compassion-Forbearance is good,” guards slapped her in the face and grabbed her hair to hit her head against a wall. She was also put in 20-pound foot chains for a month. When she went on a hunger strike in protest, inmates tied her to a bed for force-feeding, which resulted in severe injuries and mental harm.

Mr. Zhang Liang, a 65-year-old practitioner, was arrested by Kunming police in 2005 and kept at Xishan Detention Center. He was forced to pick peas every day. The labor was intensive and each detainee was required to pick 500 to 600 pounds of peas each day. When he meditated, guards often poured cold water on him and many inmates beat him.

In detention centers, practitioners were often forced to sit or stand in front of a wall for long periods of time. Ms. Chen Ronghua was arrested and taken to Wuhua Detention Center in 2001 when she was in her 70s. Inmates were instructed to beat her every day while swearing at her. They also put sanitary pads on her tongue. When she was taken to a labor camp, she had bruises all over her.

Mr. Kong Qinghuang was the Assistant Mayor of Linan Town in Jianshui County. He was sent to Jianshui Detention Center twice in 2000, first on April 7 and then on June 28, for refusing to renounce his faith in Falun Gong. Because he went on a hunger strike in protest, he was force-fed by guards every four or five days. This led to a ruptured throat, ruptured blood vessels, and bleeding. He was in a life-threatening condition when he was finally taken to Jianshui County Hospital on August 25. Resuscitation efforts failed, and he died in his 30s.

Ms. Huang Jumei was an employee of the Kunming Municipal Corporation. While held at Panlong First Detention Center in 2002, she was severely tortured for holding firm to her faith in Falun Gong. Her blood pressure shot up to 280 mmHg. She wasn't taken to a hospital until her heart condition became much worse. Ms. Huang died not long afterward. She was in her 30s.

Slave labor was common in detention centers. This included picking peppers or peas, making paper bags and envelopes, as well as assembling decorative lights. Detainees received hardly any pay. As an example, dozens of detainees at Wuhua Detention Center received only a few hundred yuan per month in total.

The working conditions were also hazardous. Detainees were given no protective clothing. The room was filled with dust, and the pungent hot peppers made their eyes tear up. Some detainees' fingernails were worn out, and the pungent odor from lacquer thinner and detergent triggered bronchial asthma as well as skin allergies.

Detention centers also made a profit from forcing detainees to buy food at high prices, as they were given insufficient food prepared from low-quality ingredients, such as unpeeled potatoes and pork with hair.

Dietary needs of various ethnic groups were largely ignored. For example, the Hui do not eat pork, but their meals were often in short supply and therefore adulterated with regular food. Some sincere believers in the group therefore refused to eat the food and lived on preserved salty vegetables or rice mixed with salt.

Wealthy inmates could pay to have others do the manual labor assigned to them. Guards and cell heads often took a cut of the money for arranging the “transaction.” One cell head said he made about 40,000 yuan in a year this way. In addition, officers often forcibly sold items to detainees or forced them to work for officers' personal gain.

“Russia: Introducing Falun Gong at a Youth Event and an Art Exhibition”