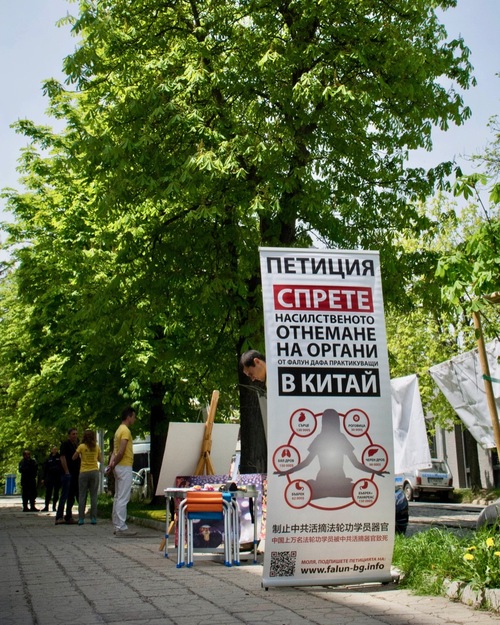 After negotiations with the then Chinese Premier Zhu Rongji, the wrongfully detained in Tianjin were released that same day. The protestors left the scene quietly, cleaning up any trash that was left.

That same day, the leader of the Chinese Communist Party, Jiang Zemin, contradicted Zhu Rongji’s decision and declared that if the party could not defeat Falun Dafa, it would be a laughing stock. For Jiang Zemin, Falun Dafa’s enormous popularity and its philosophy that is based on the principles of Truthfulness, Compassion, and Forbearance, posed a threat to the materialistic and atheistic communist ideology. The escalating political tension exploded three months later when on July 20, 1999, a statewide illegal campaign to exterminate Falun Dafa from China was launched.

Peaceful appeals have been held around the world to commemorate this historic event 20 years ago. The Bulgarian practitioners gathered in front of the Chinese Consulate in the early afternoon to raise awareness about the illegal persecution of the practice in China. Posters about the forced organ harvesting from living practitioners were displayed. 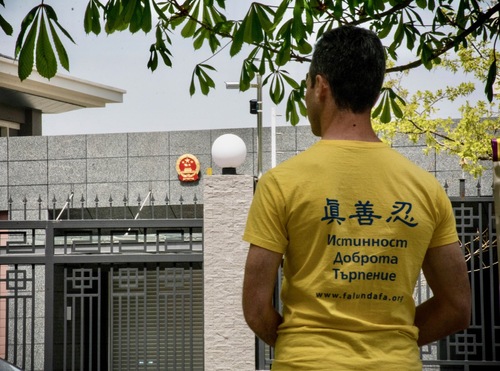 Falun Dafa is practiced freely in Bulgaria and in more than 100 other countries worldwide. Practitioners are very well aware of the harmful effects of the communist slanderous propaganda in China. Some of them have experienced it firsthand. With a compassionate mind and complete lack of intention for revenge, the practitioners have aspired to clarify the truth to the Chinese Embassies’ officials through such peaceful appeals.

In China, Falun Dafa’s followers commemorated the April 25 appeal by displaying banners and posters in public areas. They put up the banners in the middle of the night to keep from getting arrested by the authorities.

Armed security police were present during the event in Sofia. Some of the policemen heard for the very first time about the ongoing persecution in China. One of them was deeply disturbed by the brutality of the persecution. He carefully read the materials and offered his support to the practitioners.

Passersby signed the international petition to end the persecution of Falun Dafa, and to bring to justice its initiator Jiang Zemin.

Another bystander who travels to China often was surprised to learn about the atrocities. He took a flyer and told the practitioners that he would look into details of the persecution.

The persecution of Falun Dafa is illegal and it is against the Constitution of the People’s Republic of China (PRC), as well as the international agreements signed by the PRC.

Falun Dafa adherents are killed in state hospitals in China for their organs. The purpose of the killings are for lucrative profits from the state-sanctioned business of organ transplants, according to the report “Bloody Harvest/The Slaughter: Update (2016 edition) by David Matas, David Kilgour and Ethan Gutman. Taiwan, Israel, Italy and, Norway, and have passed legislation, restricting their citizens from traveling for organ transplant surgeries in China. Recently, parliamentary debates on the subject were also held in the Czech Republic, Croatia, UK and Canada.

This operation of forced organ harvesting brings more than a billion US dollars yearly to the communist government in China, experts say.

Following the recommendation of the International Coalition to End Transplant Abuse in China (ETAC), in December 2018, an independent tribunal in London started investigating the allegations of forced organ harvesting from living prisoners of conscience in China.