(Minghui.org) May has been a busy month for Falun Gong practitioners. Besides holding celebrations for the 20th annual World Falun Dafa Day and founder Master Li Hongzhi's birthday, practitioners have also participated in various community events and other activities throughout the world.

Through these activities, Falun Gong practitioners share the beauty of this mind-body cultivation practice and raise public awareness of the 20-year persecution of Falun Gong in China.

Practitioners from the Ottawa area attended the 67th International Tulip Festival on May 20. This is a very popular festival, attracting approximately 650,000 visitors each year.

The practitioners held a large-scale group exercise demonstration at Dow's Lake. Many tourists stopped by and talked to practitioners and quite a number of people expressed interest in learning the exercises. 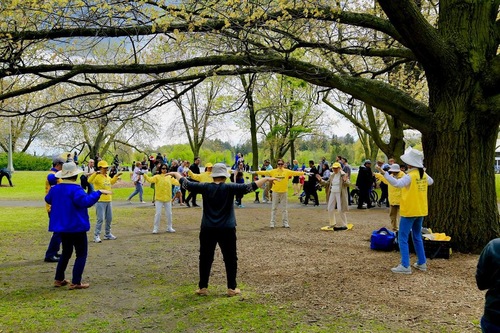 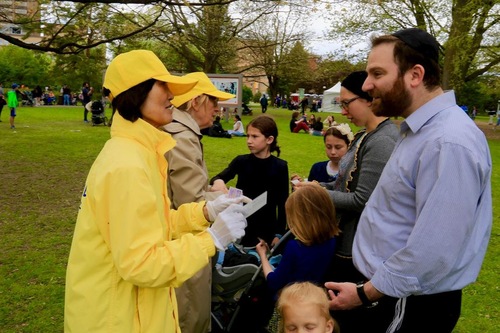 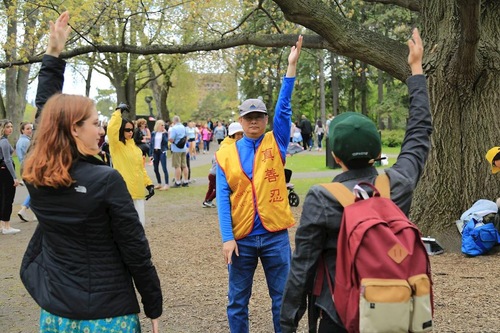 Many visitors to the International Tulip Festival in Ottawa expressed interest in learning the Falun Gong exercises. 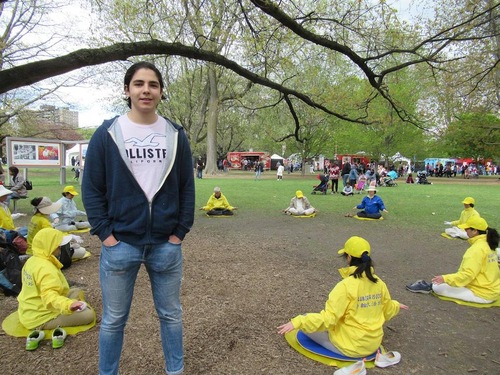 As he watched the group exercises, college freshman Mudar Ayouby said that he would like to join the practitioners because he knows that meditation can release stress. Mudar said he appreciates Falun Gong's guiding principle, Truthfulness-Compassion-Forbearance. He remarked, “Everybody should try it. It would help everyone worldwide feel peace and experience a reduction in stress. Their lives would be more meaningful.”

When the chair of the Chinese National People's Congress, Li Zhanshu, visited Norway in May to meet with politicians and business executives, he encountered a peaceful protest by Falun Gong practitioners on Parliament Hill on May 15. Practitioners held banners that read “Falun Dafa is good,” and “Stop the persecution of Falun Gong,” which drew attention from passersby. They also distributed a large number of fliers exposing the persecution, especially the state-sanctioned forced organ harvesting of prisoners of conscience in China. Many people took fliers, talked to practitioners, and expressed their support for the practitioners' peaceful resistance. 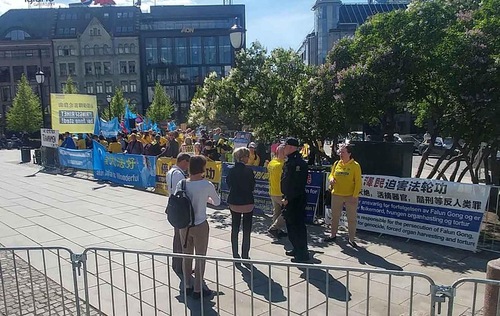 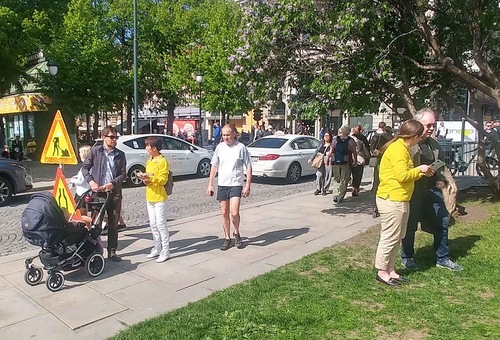 Passing out fliers and raising awareness of the persecution in Oslo

On May 18, practitioners from Hamburg, Germany, held a Falun Dafa Information Day. They introduced the practice to the public and called for an end to the persecution in China. Many people signed a petition condemning the Chinese regime's forced organ harvesting from prisoners of conscience. 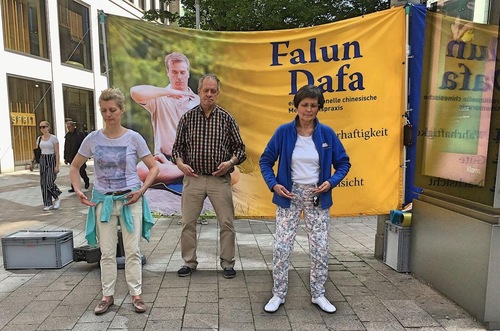 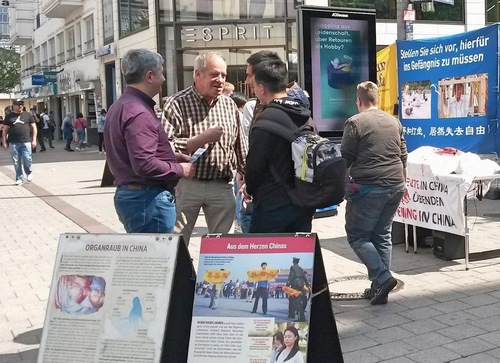 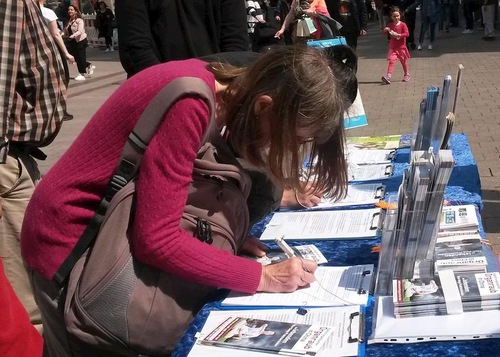 People sign the petition to condemn the persecution in China. 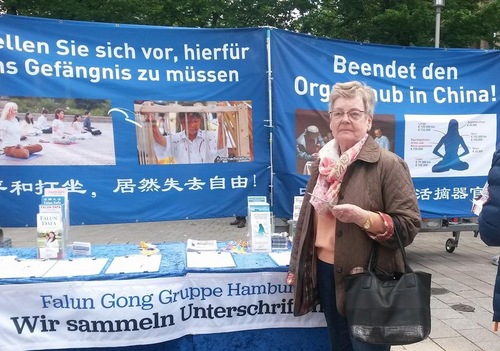 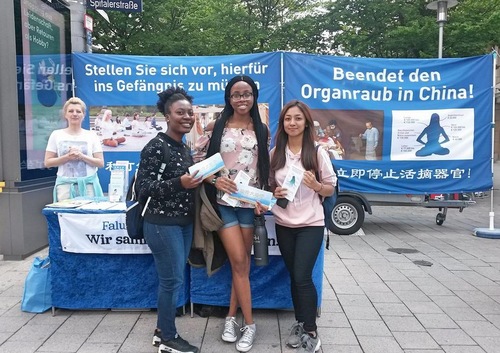 Three students from Africa hope to bring up the issue of the persecution in China during an upcoming class discussion.

At the end of April, Turkish practitioners in Antalya participated in a two-day Tourism Festival. 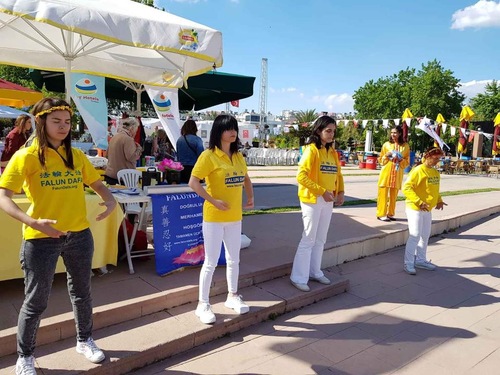 Demonstrating the exercises in Antalya. 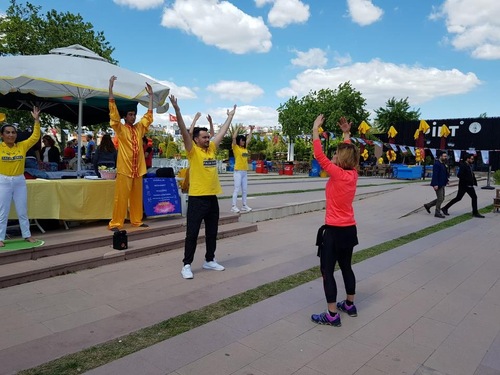 Günseli, a tourist, is learning the exercises. She came back again the next day to learn more. 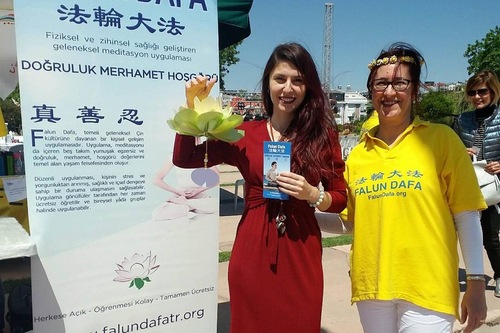 Begüm Borçetin was moved to tears when she heard about Falun Gong's principle of Truthfulness-Compassion-Forbearance. She learned the five sets of exercises, and hopes to join the local exercise site. 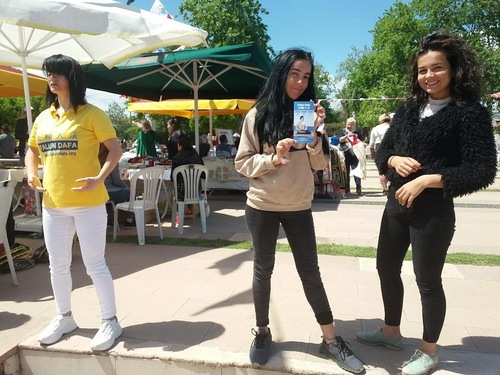 Iffet and Nimet felt that their bodies were “light like birds” when they learned the exercises. “All the stress has disappeared,” said Iffet. 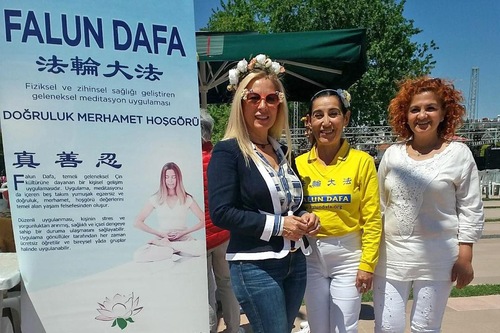 The organizer of the event, Hatice Bozkurt (left), told practitioners that the festival would not have had the diversity nor would it have been so rich, if it wasn't for Falun Gong's participation. She invited practitioners to attend another local community event.

On May 11, practitioners from São Paulo traveled to Bras, a local Chinatown-like business district, to hand out fliers and talk to the public about the lies that the Chinese Communist Party (CCP) has publicized to slander Falun Gong. They also demonstrated the exercises and held up truth-clarification banners and display boards. 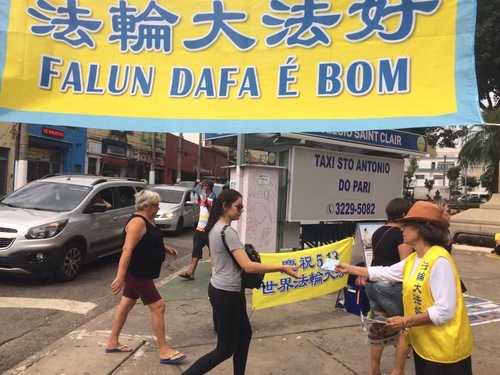 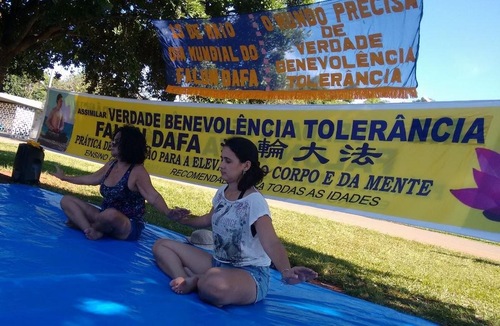 A spectator is learning the exercises.

The next day, practitioners from Brasilla held a similar activity.

The waist drum troupe, made up of local Falun Gong practitioners, performed at the annual Toufen Parade on May 11 in Toufen City, Miaoli County. 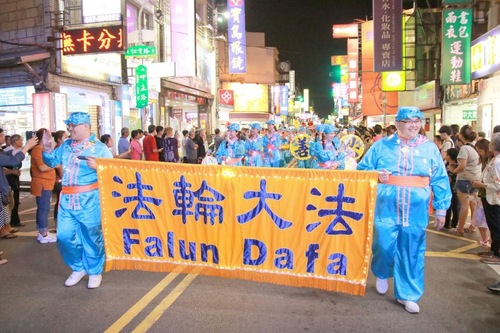 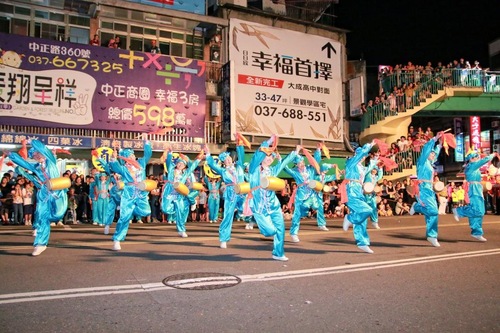 Among the 38 entries in the parade, the Falun Gong group was one of the most vibrant. Their performance was warmly welcomed by the spectators and local community leaders. Many people called out “Falun Dafa is good” as the group approached. 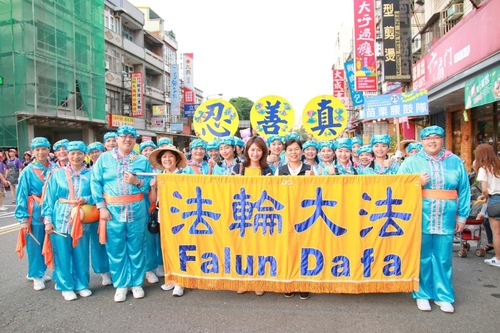 The mayor of Toufen, Luo Xuezhu (middle) has her picture taken with practitioners. 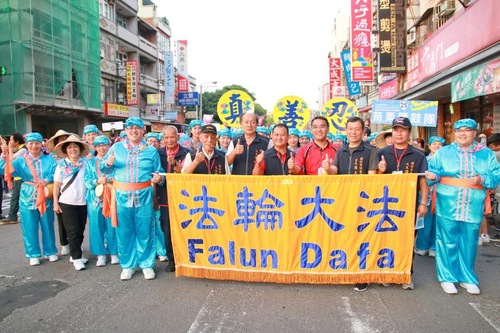 Local community leaders pose for a photograph with practitioners. 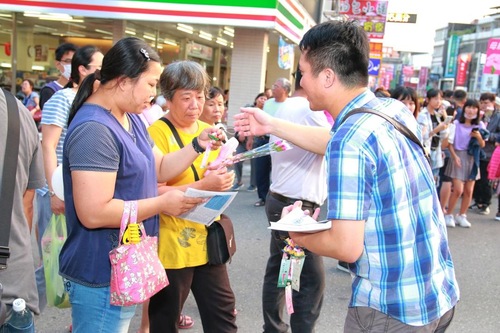 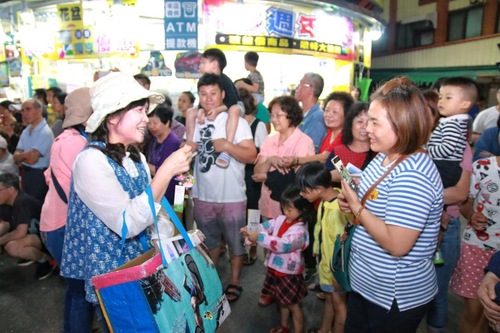 Spectators were happy to accept Falun Gong fliers and handmade paper lotus flowers. The lotus flower is a symbol of purity.