(Minghui.org) To raise awareness of the Chinese Communist Party's (CCP) persecution of Falun Gong, also known as Falun Dafa, practitioners around the world hold events at tourist destinations and other public areas. The following are reports of recent events held in Germany and Italy.

Falun Gong practitioners talked to tourists, especially those from China, at Lake Titisee in Black Forest, Germany on May 4, 2019. They explained the Chinese regime’s 20-year persecution of the Falun Gong spiritual practice.

Temperatures were freezing that day, and it snowed in the afternoon. There were fewer tourists, but tour groups came one after another, including five or six from China. 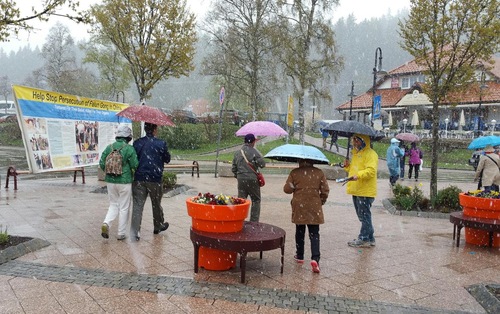 Practitioners raise awareness of the persecution in Lake Titisee, Black Forest, Germany on a snowy day on May 4, 2019. 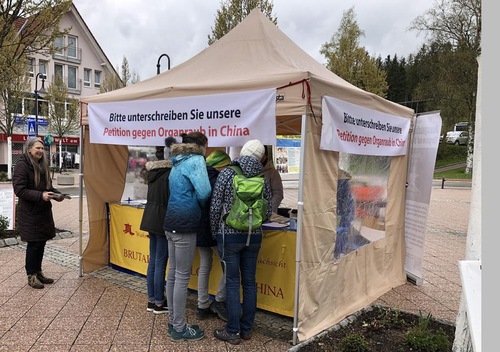 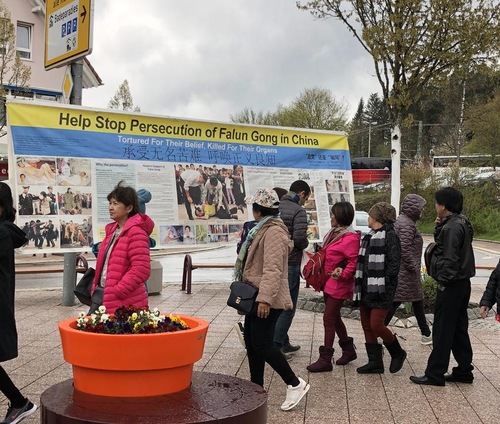 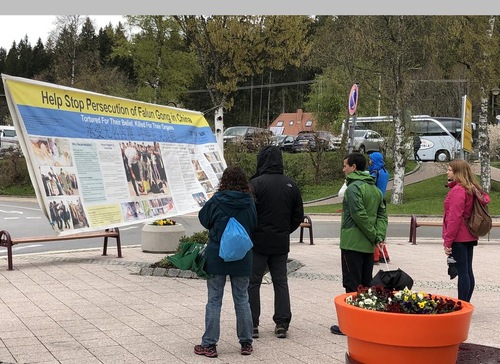 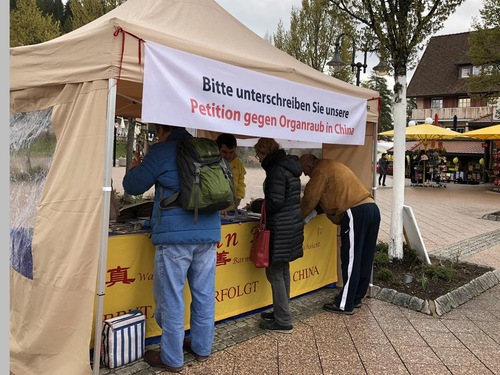 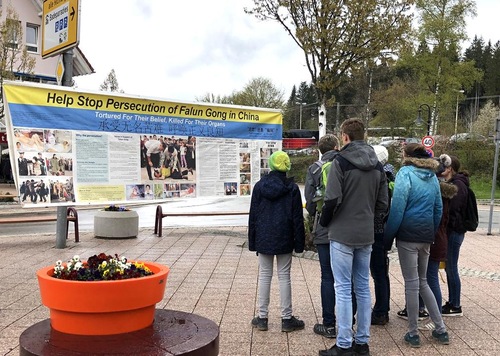 Several Chinese tourists who took a snow tour in the scenic spot felt the fresh air of Germany. When a Falun Gong practitioner mentioned withdrawing from the CCP and its affiliated organizations, one of them said, “We are patriotic and do not participate in politics.”

The practitioner said, “Being patriotic is right, but patriotism is not the same as loving the Party! The CCP has ruined China's great rivers and mountains. Over 80 million innocent Chinese people have been killed by the Party.

“The Party has persecuted Falun Gong over the past 20 years and even harvests organs from living Falun Gong practitioners. If you are patriotic, you would definitely oppose the CCP and resist its evil politics.

“People must choose between right and wrong, good and evil. For a long time, the CCP has deliberately confused the two concepts of China and the Party to deceive the people and tighten its control.”

At this time, these Chinese tourists reached out to get truth-clarification materials. They also said they would take a good look at the information after going back to the hotel. One said they would renounce the Party on the Epoch Times website. 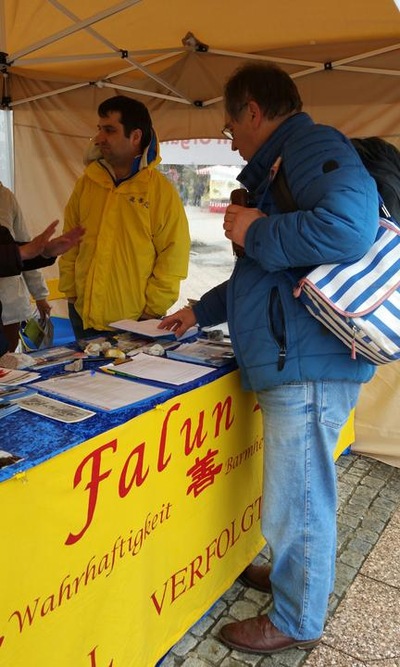 A visitor from Karlsruhe glances at the book Zhuan Falun and buys it.

After signing the petition, he smiled and said, “I signed this. Maybe I won't be able to go to China in the future. But even so, I still have to do this. I hope that one day the Chinese people can also have freedom. Everyone needs freedom.”

The Brandenburg Gate in Berlin is one of the most important tourist destinations in the city. Hundreds of thousands visit the site every day during Spring. Falun Gong practitioners were nearby on May 4, 2019, with fliers in 30 different languages. They collected signatures for a petition condemning the CCP's persecution. 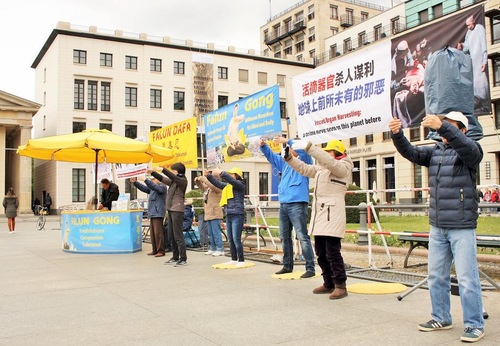 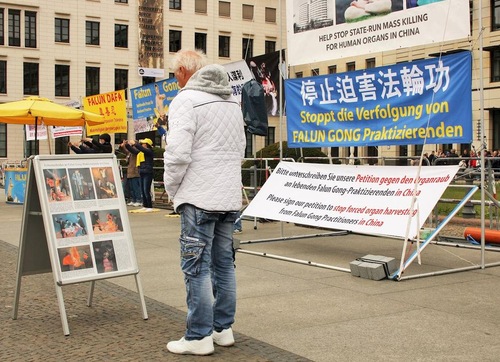 A passerby reads a poster with information about Falun Gong. 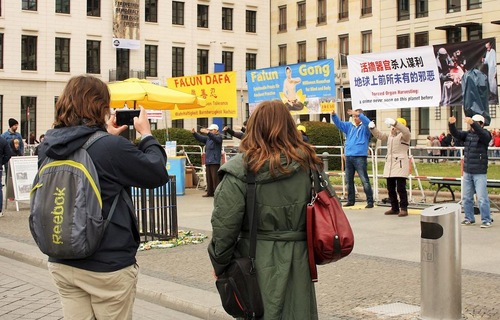 A tourist takes photos of the Falun Gong stand. 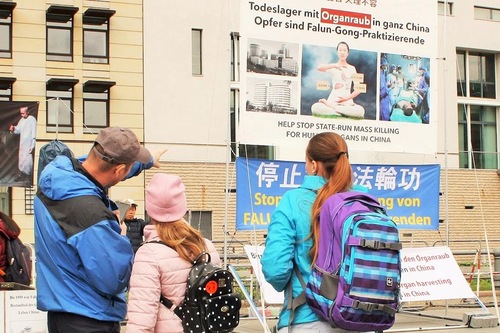 Tourists look at the five-meter-tall poster. 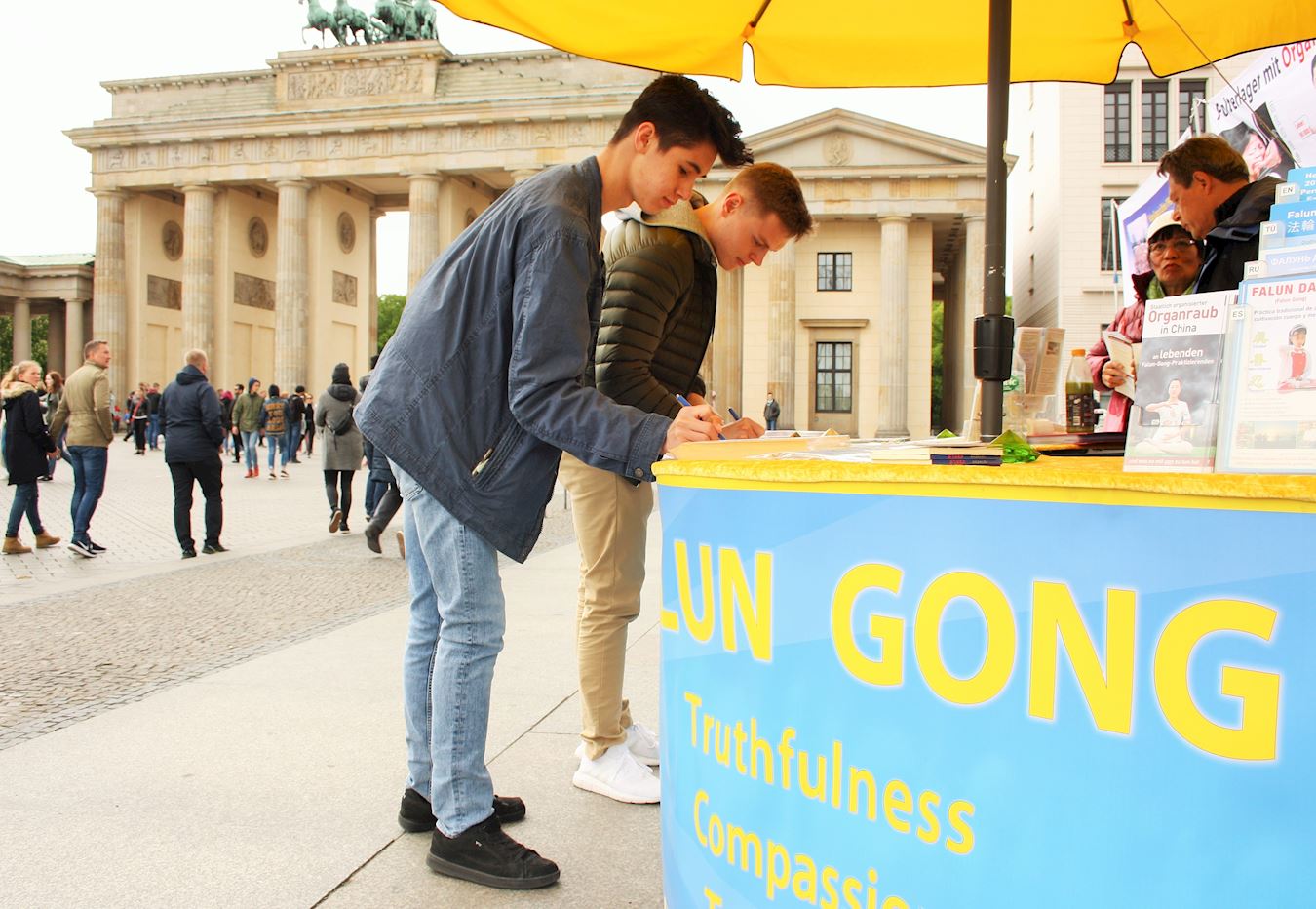 Tourists sign a petition to protest the persecution in China. 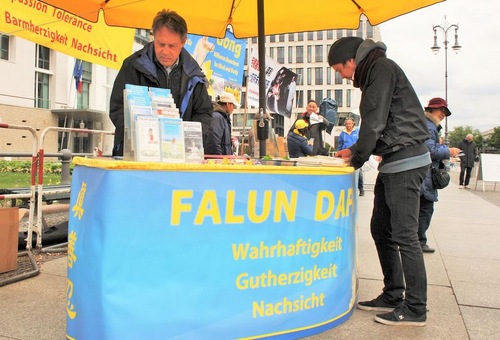 John from France signs the petition.

John from France had encountered Falun Gong practitioners before. He signed the petition protesting the CCP's forced organ harvesting and lamented, “In fact, the place where this crime is happening is not far from us.” 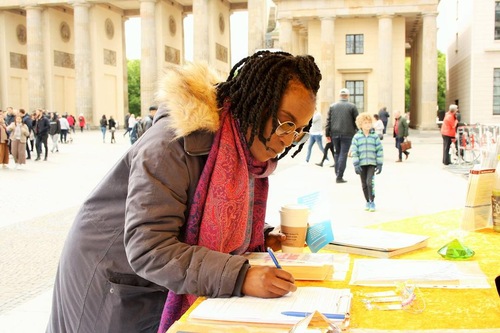 Mireka from the Netherlands signs the petition.

Mireka, who held a flyer in Dutch in her hand, was very interested in learning Falun Gong. She said, “I have seen people practicing Falun Gong in Amsterdam. My boyfriend and I want to learn it. Is there a practice site in Amsterdam?”

The practitioners showed her the information on the Dutch website Falundafa.nl. When she saw one of the two practice sites in Amsterdam, she said happily, “Oh, that is very close to me.”

She immediately signed the petition when she learned that Falun Gong was persecuted in China.

Falun Gong practitioners in Italy held a series of events at the end of April 2019. Practitioners from Tuscany were on a street named Lungarno Diaz in Florence on April 25. 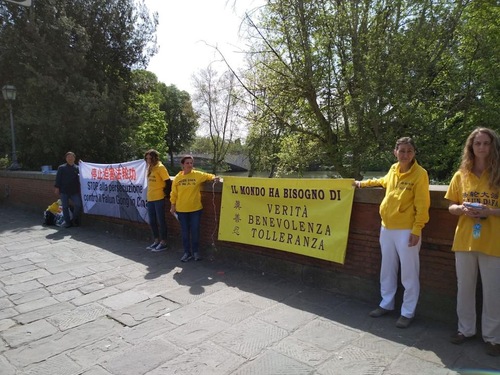 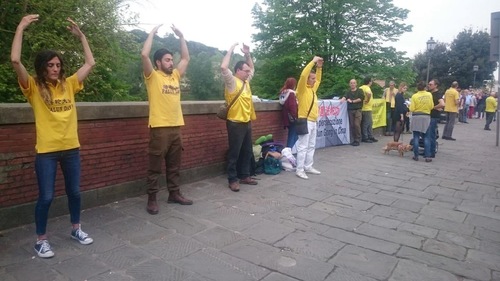 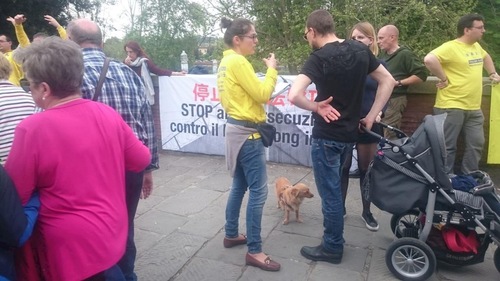 The street is close to the historical center of Florence. Tour buses generally park there. Several thousand tourists visit the city every day. Most were in tour groups and on tight schedules, and there are always pedestrians and vehicles on the road.

The practitioners held eye-catching banners on the street. They also demonstrated the Falun Gong exercises and talked to tourist in front of the bus stop.

A passerby attracted by the exercise demonstration said he wanted to learn more. He asked about local practice sites and how to learn the exercises. He was happy to learn that there was a practice site in Prato, near his home, and that he could find more information online.

Falun Gong was first taught to the public in 1992. Nearly 100 million people across China were soon practicing Falun Gong after experiencing improvements in their health and moral character.

Jiang Zemin, former head of the Chinese Communist Party (CCP), perceived the spiritual discipline's growing popularity as a threat to the CCP's atheistic ideology and issued an order to persecute Falun Gong on July 20, 1999.

Minghui.org has confirmed the deaths of thousands of Falun Gong practitioners in the persecution over the past 20 years; the actual number is suspected to be much higher. More have been imprisoned and tortured for their faith. Evidence shows that the CCP harvests organs from detained practitioners, who are killed in the process, to supply the country's organ transplantation industry.

“A Few Suggestions to Practitioners in Vietnam”